Jon Huntsman distances self from self 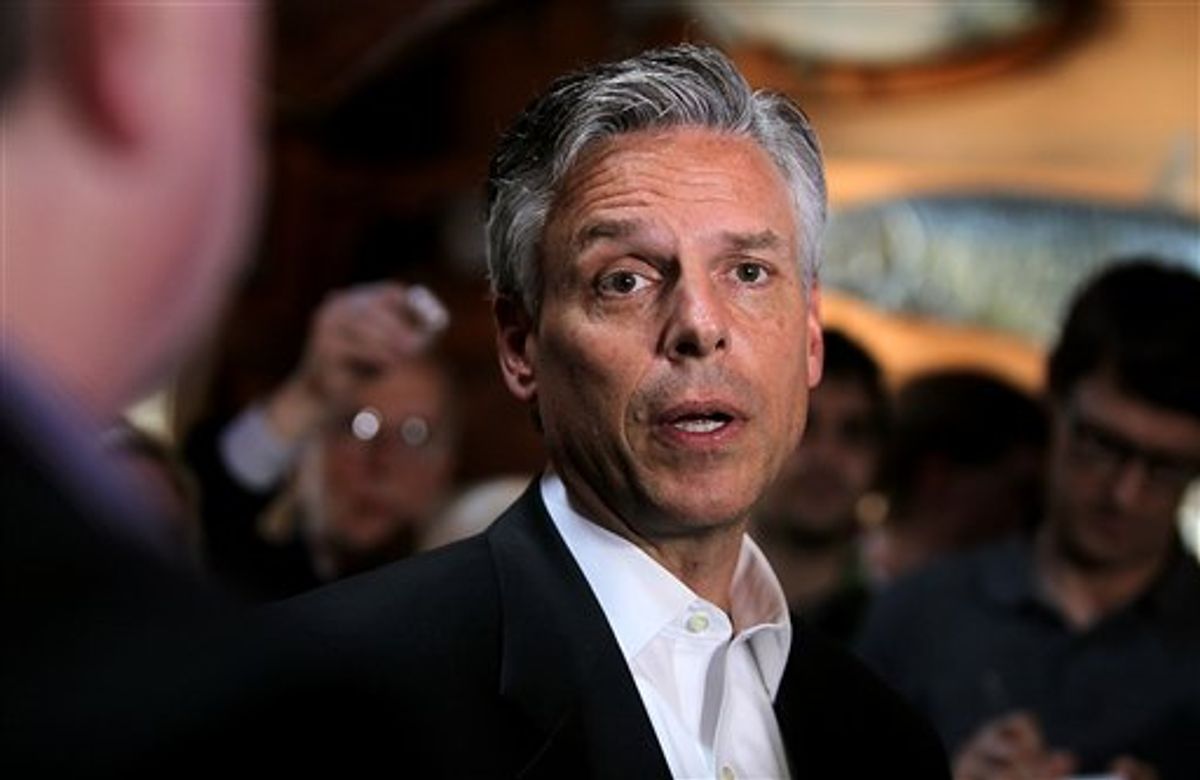 Despite the fact that he is a moderate who actually took a job working for capitalism-despising Kenyan anti-colonialist Barack Obama, former Utah Governor Jon Huntsman seems to be running for president, as a Republican. At the moment, Huntsman is working to address two of his major weaknesses: his faith and his political philosophy.

Huntsman was a popular and successful governor and he's got extensive foreign policy experience, but this year you're better off being a pizza magnate. So Huntsman needs to prove that he is just as conservative as the people without his extensive and respectable resume. The first step is not making Newt Gingrich's mistake in failing to endorse Paul Ryan's plan to eventually eliminate Medicare. Huntsman told ABC that he totally would've voted for the Ryan budget, and he'd repeal Obamacare:

Jon Huntsman: I would've voted for it.

George Stephanopoulos: Including the Medicare provisions?

Jon Huntsman: Including the Medicare provisions. Because the only thing that scares me more than that is the trajectory that our debt is taking.

So on this particular issue, the "moderate" Republican is the same as the... non-moderate Republicans.

Oh, and he also says that while he once supported cap-and-trade, he no longer supports it, because of the economy. But this doesn't count as changing his position! Because the "CEOs" and "experts" who once supported it now agree that we must do nothing to address carbon emissions until we really feel like it.

One more thing for Huntsman to walk back before his campaign can really get doing: The fact that he is a Mormon. Politico says Mormons in Utah are getting a bit concerned, because Huntsman set up his campaign headquarters in Florida (which, to be fair, is a more important state than Utah, in terms of presidential elections), but more importantly because he told Time Magazine that he's not sure he's still actually a Mormon. Huntsman did later say, on TV, that he is definitely a Mormon, but Mormons are very sensitive about the fact that people think they're a bit weird.

Lots of Republican primary voters are not sure they'd vote for a Mormon, though I'm sure these same people would not vote for a person who once said nice things about Barack Obama no matter his religion. Poor Huntsman will never convince voters he's as right-wing as Michele Bachmann, but, on the other hand, standing by his principles won't get him anywhere, either. He should've stayed in China.