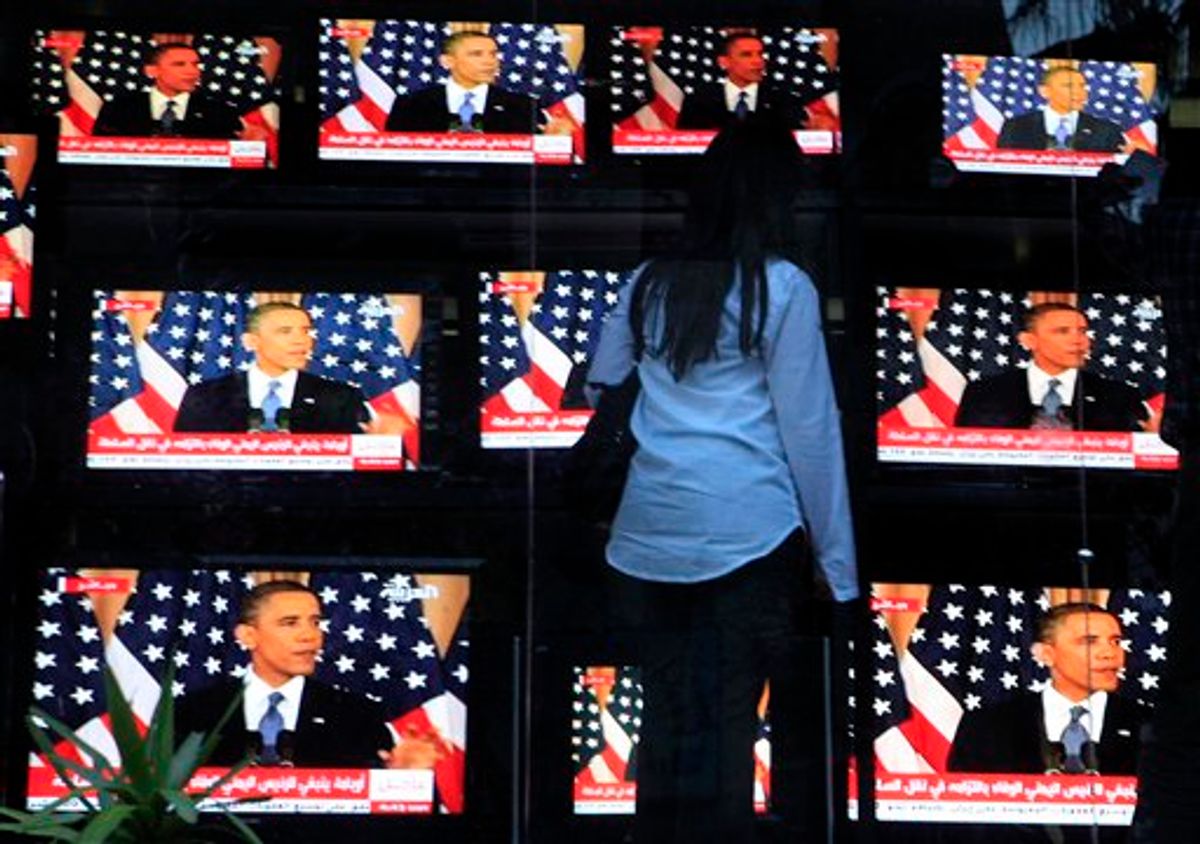 An Egyptian woman watches U.S. President Barack Obama's policy address, outside a shop selling televisions in Cairo, Egypt Thursday, May 19, 2011. President Barack Obama on Thursday endorsed a key Palestinian demand for the borders of its future state and prodded Israel to accept that it can never have a truly peaceful nation based on "permanent occupation." (AP Photo/Amr Nabil) (AP)
--

The borders of Israel and Palestine should be based on the 1967 lines with mutually agreed swaps, so that secure and recognized borders are established for both states.

The heated reactions did not seem to account for the president's use of the word "based"; in other words, he did not demand a return to the precise pre-1967 line, but stated that territories captured by Israel in the 1967 MidEast War should be a basis for negotiation.

Israeli Prime Minister, Binyamin Netanyahu issued a swift rejection of Obama's remarks. He called the 1967 lines "indefensible." Netanyahu is heading to the White House Friday for what is now bound to be a tense meeting with Obama.

Although Obama's remarks have been read as a concession to Palestine, Hamas has already spoken out against the president since his speech. According to Ynet News, Hamas spokesman in the Gaza Strip, Sami Abu-Zuhri said:

The (Arab) nation does not need a lesson on democracy from Obama... Rather, Obama is the one who needs the lesson given his absolute endorsement of Israel's crimes and his refusal to condemn Israel's occupation.

The Palestinian Authority, which controls the West Bank, called an urgent session following the president's speech. P.A. president Mahmoud Abbas' spokesman issued a softer response than that of Hamas. "We respect the American decision to revive the peace process," he said, but stressed that the "American Administration must make sure that Israel bears the responsibility for the ongoing deterioration of the peace process."

This video from Reuters (via the Guardian) features mixed reactions from Israelis and Palestinians to Obama's speech. Notably, the Israelis spoken to highlight that most Israelis feel the Palestinian people should have their own state and better treatment:

Perhaps the strongest criticisms of Obama's remarks so far have come from the GOP, as POLITICO rounds up.

Mitt Romney: "President Obama has thrown Israel under the bus."

Of course, the most vitriolic reaction to Obama's speech came from Glenn Beck, who is planning a rally in Jerusalem this August. On his FOX News show last night, Beck said Obama's policy on Israel would lead to the destruction of the Western way of life:

Meanwhile, as the Wall Street Journal reports, some Jewish donors and fundraisers have warned Obama that he risks "losing financial support because of concerns about his handling of Israel."

With this in mind, as Justin Elliott notes, "it will certainly be interesting to compare Obama's rhetoric [yesterday] to his remarks before the American Israel Public Affairs Committee (AIPAC) on Sunday."