Is this show bad, or am I fickle? 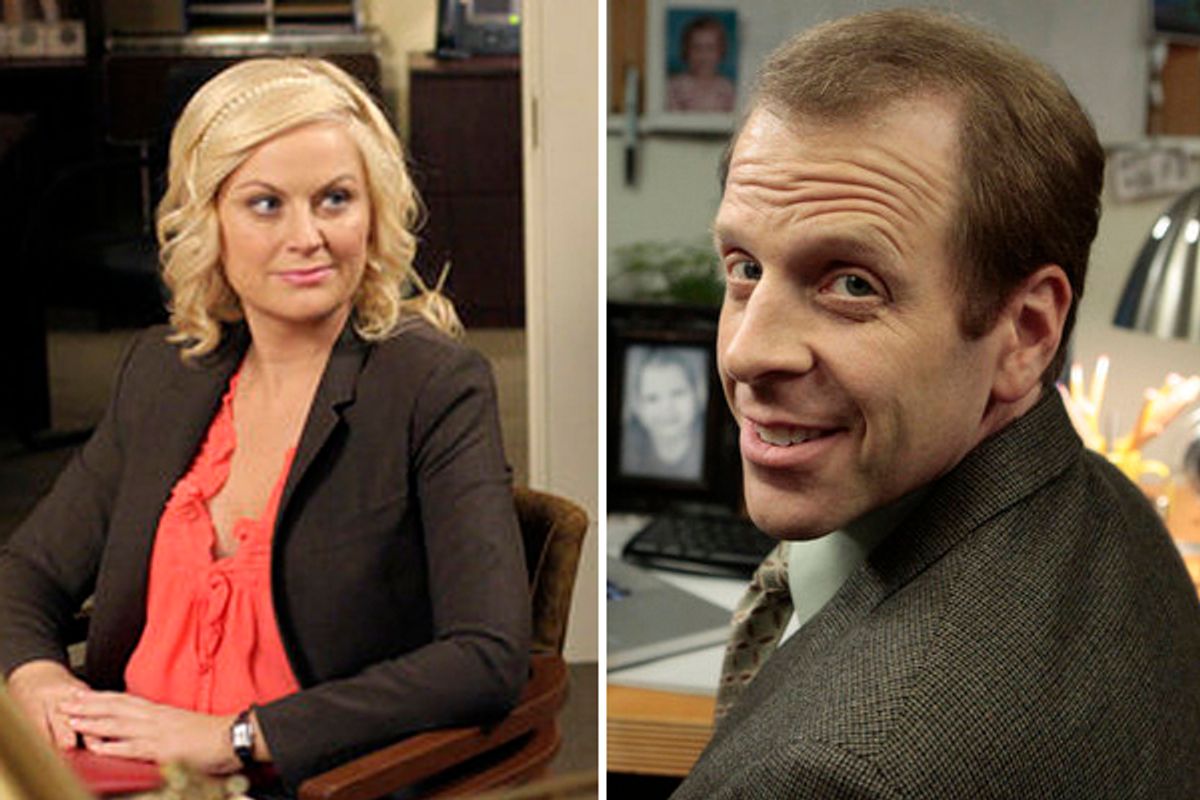 "The best part of any relationship is the beginning," said Leslie Knope (Amy Poehler) in last night's excellent season finale of "Parks and Recreation."

The line referred to Leslie's office romance with co-worker Ben Wyatt (Adam Scott). But it also cast light on my feelings about this show and its Thursday night stablemate, "The Office," which has sort of been limping along this year, building toward the April 28 departure of office boss Michael Scott (Steve Carell), and then struggling to figure out what to do with itself in his absence. I've been hard on "The Office" as it closes out its seventh season, and kind toward "Parks and Rec," which is two seasons old. And I recently contributed an item to the Washington Post's annual "Spring Cleaning" feature saying that I thought it was time to put the 22-year old "The Simpsons" out of its misery.

Here's the thing: Last night, out of curiosity, I looked back on my TV reviews for Salon and other publications, and realized that I tend to be tougher on shows that have been around awhile than ones that are just starting out.

And I had to wonder, where does that tendency come from? What's causing it?

Is it a natural and fair response to TV's financial obligation to crank out X number of episodes and Y number of seasons even when it doesn't have good stories to tell or interesting points to make? In other words, when I start to get disenchanted with a show, is it because the show is failing to conquer the commercial constraints of the medium, and cranking out substandard stuff? Or are the show's creators actually doing a pretty good job, all things considered, and I am just one of those people who gets bored and cranky looking at the same faces and situations year after year? Would every series benefit from being structured as a limited-run production of one or five or however many seasons, depending on how many episodes the producers and the network thought it could sustain? Are all shows doomed to run out of gas after a while? "The X-Files" and "NYPD Blue" were great in their first few seasons, but toward the end they were mostly weak. If my favorite series, "Deadwood," hadn't gotten blasted out of its boots after Season 3, would I have continued to lionize it? Or would my complaints have grown sharper and more frequent? And would those complaints have been legitimate responses to the inevitable decline in quality that affects every show, or just an admission that, like Leslie on "Parks and Rec," I like the beginnings of relationships?

Sorry, I don't mean to overload you with questions. But you can see what I'm getting at, can't you? Do you have this sort of response to TV shows? And if so, do you think it's TV's problem, or yours?

I originally came here to write that last night's one-hour "Parks and Recreation" mopped the floor with the one-hour finale of "The Office." And I do think that, scene for scene, "Parks and Rec" was funnier, brighter and altogether more enjoyable hour of TV.  I liked the innocent, furtive, hapless quality of Leslie and Ben's relationship, and I loved the second half -- an episode built around the funeral of a horse, Li'l Sebastian -- for the way it sent up the more annoyingly plastic and trite rituals of public mourning. "Who are we?" asks the announcer of a commemorative video shown at the horse's memorial service. "Where are we going in life? What is the meaning of all of this? These are questions Li'l Sebastian never had to answer because he was a horse." (Cut to: Rob Lowe's Chris weeping uncontrollably.)  And I got a huge kick out of Leslie ordering thickheaded Andy Dwyer (Chris Pratt) to write a tear-jerking memorial song "five thousand times better than 'Candle in the Wind,'" and Andy coming up with a song titled "Five Thousand Candles in the Wind," then bellowing it in that bombastic, raspy-voiced, faux-1990s grunge way of his: "Up in horsey heaven, here's the thing/You trade your legs for angel's wings/And once we've all said goodbye/You take a running leap, and you fly!"

This was near-great comedy, verging on "Chuckles the Clown" territory, and the episode kicked everything up a notch by tweaking one of the more pretentious conceits of series TV writing, the tendency to structure all the subplots in certain episodes around a Big Theme.  In this case, the theme was fear of mortality. But not really: "Parks and Rec" seemed mainly to be goofing on that idea, as evidenced by that wonderful bit early in the second half when 44-year-old Chris goes to the doctor complaining about a pain in his shoulder and is diagnosed with tendinitis and told that it's not uncommon in men his age. Chris: "Is there a cure?"  Doctor: "Get a time machine, go back to being 20."

"The Office," in contrast, just doesn't have the liveliness, the brightness, of "Parks and Rec," a show that admittedly would not exist if "The Office" hadn't paved the way for it. These post-Michael episodes have been mostly mediocre, not just because the sense of structure is iffy but because the tone is so awkward. Right now the show is capturing that feeling of going back to your old high school a few months after graduation, and that's definitely not a good thing.

But there were still lots of good moments in last night's season finale, a guest star-heavy hour built around the search for Michael's replacement: Phyllis convincing herself that Erin was the baby she carried back in 1982, then gave up for adoption ("It was a big year for babies. 'Porky's' had come out"); Dwight proclaiming, "Bread is the paper of the food industry ... You write your sandwich on it," and then showing up for his interview dressed like Claude Rains as the invisible man and speaking in a French accent; Pam trying to staunch the damage caused by acting office manager Creed Bratton by giving him two identical pictures of a building and telling him that management wanted him to identify the seven differences between them; James Spader's amazing cameo as a refinery equipment salesman applying for Michael's old job, which was so hilariously unsettling that it overcame the "Hey, that's a big star doing cameo" factor. ("There is only sex. Everything is sex. You understand that what I'm telling you is a universal truth, Toby.")  Between these moments and a memorably weird appearance by presumptive Steve Carell replacement Catherine Tate, I'd say there's a chance that "The Office" can justify its continued existence, maybe even reinvent itself.

More important, though, in the context of this column, there's nothing inherently wrong with "The Office" finale, except that it's the final episode of the seventh season of a series that has been on the air long enough to develop tics and flaws and blind spots, and be taken for granted by viewers who, like me, are constantly on the prowl for the newest and latest.  It was a very good hour -- perhaps not as funny and vigorously paced as the "Parks and Rec" finale that same night, but only because in TV comedy match-ups, as in most athletic contests, victory often goes to the strong, and the strong tend to be young.  Give "Parks and Recreation" time. It'll develop tendinitis eventually.

Parks And Recreation Television The Office