I'm a nervous person prone to hypochondria. Reality TV is my natural Xanax 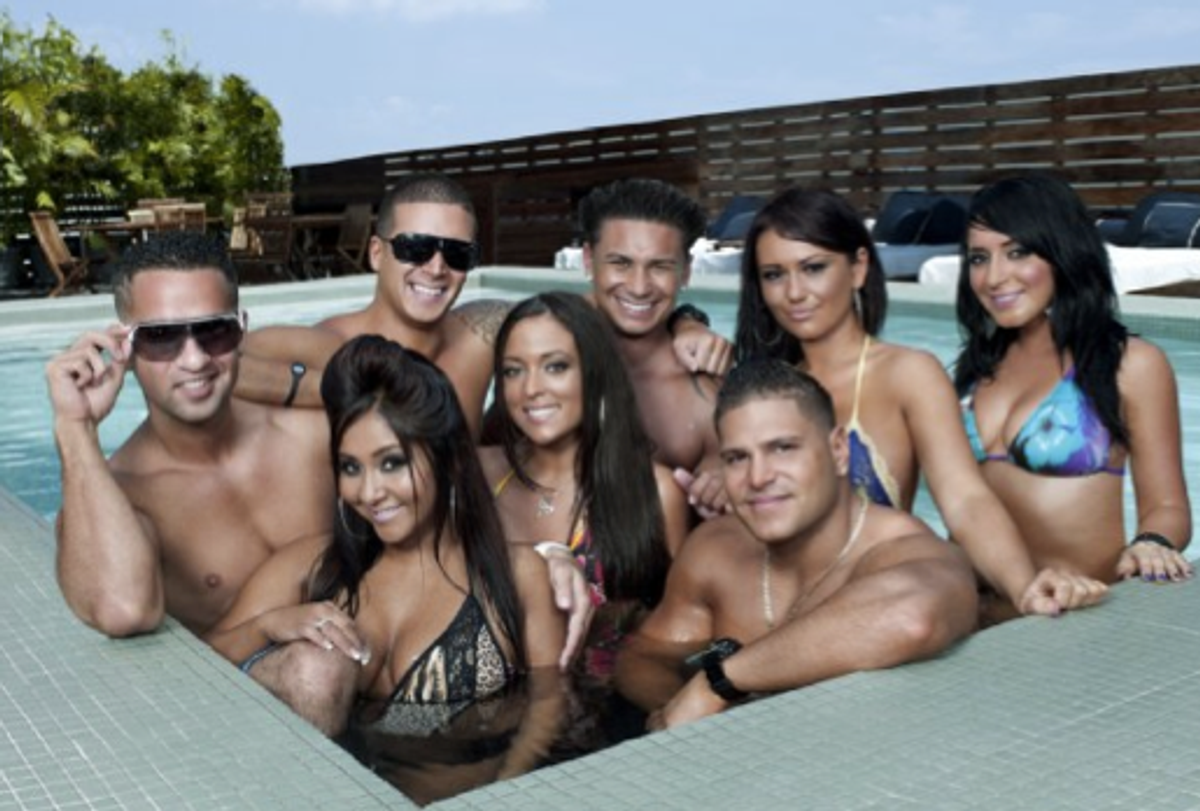 There are few things more brain-frying and panic-inducing than a New York City apartment hunt. More pleasant activities include urinary tract infections and burying beloved pets. And so, after my husband and I put in yet another application for a Brooklyn apartment, we found ourselves sitting on the sofa like sleepwalkers. As we cracked a bottle of wine, I reached for the remote, seeking respite from the anxiety wheel in my brain. I flipped past several informative news programs and a biography of Ashton Kutcher, and then I found it -- the brain balm I was craving: There was Teresa Giudice, looking ever so much like "The Predator" in Prada boots. I watched as she yowled at her sister about someone's christening, and I inhaled deeply. Something in my chest blessedly loosened, and I relaxed back into the couch.

I watch reality TV. And not of the "Extreme Makeover Home Edition" life-affirming variety. I watch "Jersey Shore," "Big Fat Gypsy Wedding" and any of "The Real Housewives." I watched "The Hills." I watched "The City." And were someone to sneak a look at my iTunes, they would see I even watched the short-lived "Kell on Earth."

Am I embarrassed by this? Of course. Do I realize that many of these shows are not only vapid, but horribly offensive, and are tearing apart the very fabric of our culture? I do. Will I stop watching? Not likely.

I am no philistine. I know Egan and McEwan isn't a funeral home, but the surnames of two of my favorite writers. I love the plays of Martin McDonagh and the paintings of Takashi Murakami. I have seen "The Wire" in its entirety. I have 9.4 days worth of music on my computer -- some of which is so Indie hip it'd make even a Bushwick barista lower his frameless glasses in surprise. I'm not trying to suggest I'm some sort of cultural guru. (Gurus don't pay to see Katherine Heigl fall in love. Again.) Rather, my point is that I am well aware of the many more fulfilling forms of entertainment I could be exposing myself to. As someone who actually enjoys the films of Errol Morris, why do I waste my time watching Luann de Lesseps eat a cobb salad and bitch about her weekend?

I don't watch out of any sort of envy. I don't stare at Camille Grammar's Teflon face or her pool or Swarovski tampons and think: "Why not me, God?" I don't watch Kristin Cavallari shout, "Like, I mean, like, you know?!?" to Brody's smirk as she sips her apple-tini and think: "Maybe someday I too ..."

Nor are my reasons purely of the schadenfreude variety. I don't delight in Snooki getting a right hook to the jaw. I don't feel superior when the Situation inadvertently makes love in a bed of parmesan. (People who live in glass houses ...) I can honestly say I don't watch to make my own scrambled, chaotic life seem better. No, these shows are my own 60-minute spa treatments, wherein I exfoliate the ricocheting neurons out of my brain. In short, I watch as a way of managing my anxiety.

I have mild OCD and a smidge of hypochondria, meaning that I occasionally spend longer than necessary "making sure" the oven is off. And yes, I have a few unwarranted cat scans under my belt. I am at times an anxious person, and like most anxious people, intense stress can send me into a downward spiral. The next thing I know I've spent 20 minutes relocking the doors, or examining a mysterious new mole until the wee hours of the morning. I've lived in New York for almost 10 years, so of course I've done therapy, and yes, it was helpful in teaching me various breathing exercises, mantras and so on. But you know what's also helpful? Zoning out in front of the TV while a Romanian teen bride tries not to be smothered alive by a physics-defying dress.

The first time I realized I was using reality TV as a kind of Zen meditation for imbeciles was back when I was planning my wedding. I was suffering from terrible insomnia, and the handfuls of melatonin weren't making a dent. As I stared bug-eyed at the ceiling, I came to a realization: If I laid back in bed and let my mind retrace that evening's episode of "Real Housewives," my brain just slowly shut down, my intestines untangled, and I relaxed. The strategy has served me several times since. When I was packing up to move from Ireland back to New York, Snooki was my little bump-it-sporting Sandman. Thoughts of passports and airline tickets and shipping costs and culture shock were banished as my brain replayed Nicole Polizzi sinking her ass into her own refrigerator. And soon I sank into a deep, sound sleep.

My little reality show reflection is like popping some sort of natural Xanax, albeit one with possibly more destructive side effects to my cerebral cortex. I'm aware other people watch these shows (obviously) but the majority of my friends do not. (Or so they claim.) They're all very busy watching political dramas on the BBC and documentaries about the evils of bottled water. And while I watch these things too, I find "Inside Job" just doesn't have the same soothing effects. Ronnie and Sammie's completely destructive relationship, on the other hand? It's like I've just hit play on a relaxation CD. Except the dolphin squeaks are replaced with shouts of "you whore!"

So I don't think I'll give up my reality shows any time soon. Especially not when I've just moved back to anxiety-incubation central, a town known as "the City that Never Sleeps." However, I do set boundaries for myself. I refuse to watch "The Kardashians" (even I have my limits for vapidity). I fear that were I to tune in, by the time the credits rolled my husband would find me in a catatonic state similar to Jack Nicholson's at the end of "One Flew Over the Cookoo's Nest." I can just imagine my husband breaking the window on our new Brooklyn apartment, as stoic as the Chief, as he carries me out into the street ... brain-dead, but at peace.