The upside of "puritanical" politics

Private behavior can reflect and reinforce cultural issues around gender, sex, and power 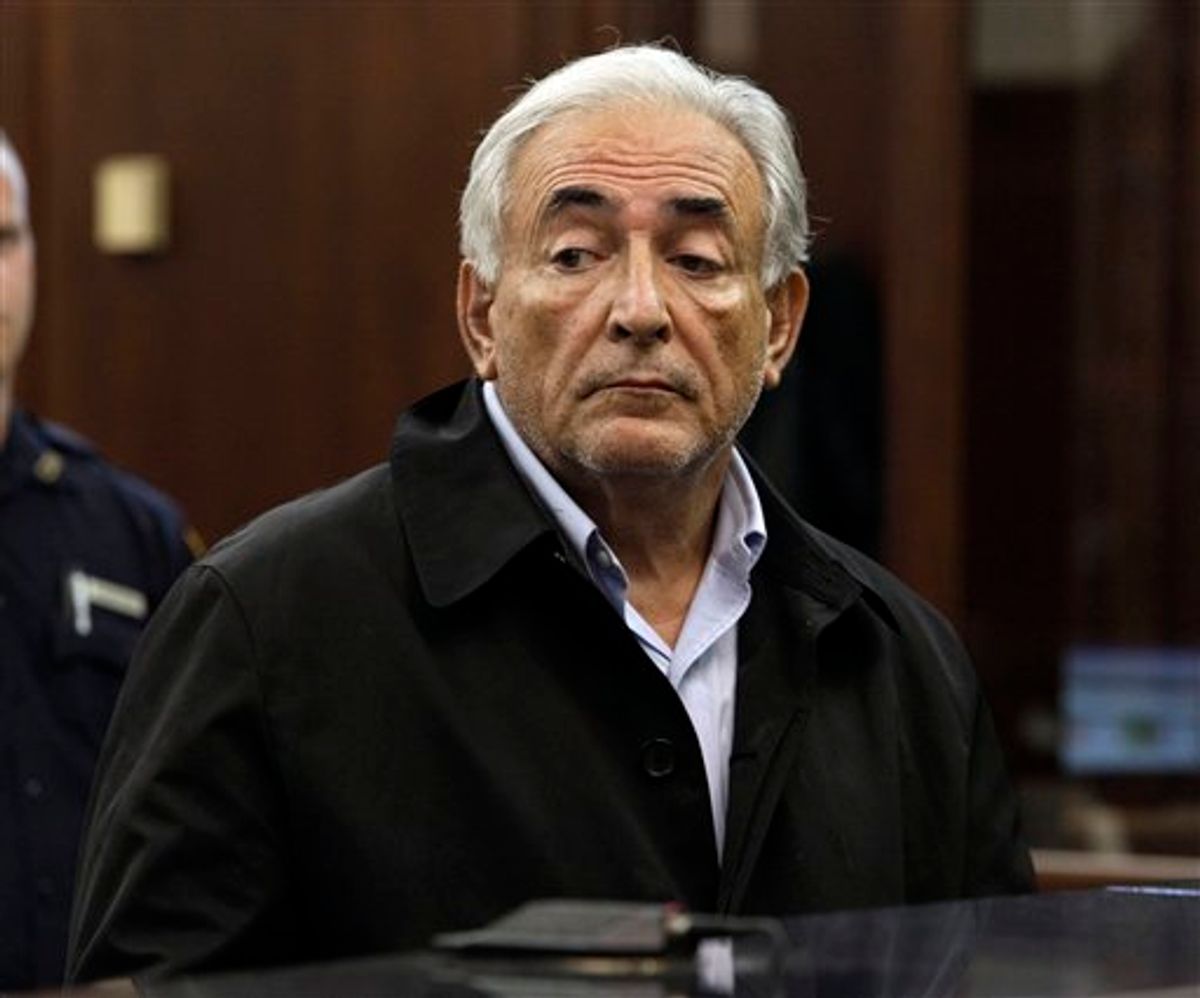 FILE - In this May 16, 2011 file photo, Dominique Strauss-Kahn, head of the International Monetary Fund, is arraigned in Manhattan Criminal Court. Strauss-Kahn, a wealthy French politician accustomed to high living and globe-trotting, wants off Rikers Island, a modern-day Bastille known as one of America's largest and roughest jail complexes. Behind bars on Rikers since Monday, the beleaguered IMF chief is scheduled to return to a Manhattan court on Thursday afternoon to again ask for bail on charges he sexually assaulted a hotel maid _ a move seemed certain to face vigorous opposition by prosecutors. (AP Photo/Richard Drew, Pool) (AP)
--

The charges of sexual assault against former IMF chief Dominique Strauss-Kahn this week came not only a few days before revelations that Arnold Schwarzenegger fathered a love child with a member of his household staff, but also just as one boor -- the Donald -- left the Republican presidential field and another one -- the Newt -- took his place.

All together that makes for a lot of Important Men in the news lately whose sexual proclivities and behavior toward women have come under scrutiny in the course of their public lives. Which makes this a good time to think about whether and how progressives can respect public figures' privacy while retaining a critical perspective on sexual politics. Should we not care how public figures conduct themselves privately so long as they don't stick their noses into our bedrooms? Or is the personal political? Is it even possible to stake out a position that acknowledges the importance of both perspectives?

To be clear up-front, leaving one's cancer-stricken wife for being too "frumpy" (Newt) or ordering women to submit themselves to sexual appraisal (Trump) is hardly on a par with alleged sexual assault. And it’s not as if public office be reserved only for those who stay faithfully married to one other person forever or otherwise meet our standards for sexual propriety.

But while it’s tempting to just leave it there -- to decry America’s puritanical "bedroom politics" that require elected officials are performing their jobs well to resign because of affairs. From this perspective, French politics, in which both the press and the public show little interest in politicians' sex lives, represents the ideal. But the Strauss-Kahn case, in which a long history of womanizing that was deemed irrelevant by the French media is now coming to light, is a reminder that private behavior even by liberal politicians who support sexual and reproductive rights can reflect and reinforce cultural issues around gender, sex, and power -- and that there are no easy answers, just glib ones, when it comes to what should be kept private or made public.

The fact is that for all their differences, neither the French nor the American approach really takes seriously the challenge of addressing the culture of deference to powerful men, or of talking about the difficult and often ambiguous questions around the public relevance of sexual politics.

The American model, for all its prudishness, is by and large a forgiving one -- it's taken more or less for granted that anyone can get back into politics if they appear appropriately contrite; the whole exercise of finger-pointing and "redemption" is essentially just pageantry. On the other hand, the French approach of classifying all sexual behavior as "private" disregards the ways in which power can distort issues of coercion and consent, and how the code of silence tends to protect men. And the tolerance of men’s sense of entitlement to women's bodies -- admiring them, ogling them, judging them, touching them, having sex with them -- runs deep in a culture in which women are prizes, trophies, objects to be acquired when success is achieved. Declaring this kind of behavior and the culture that underlies it off the table for discussion can have the effect of reinforcing gender dynamics in which men have the power, and women have sex with the power.

Of course, we don't know the exact details of the Strauss-Kahn case. Yet the descriptions -- often defensive -- of Strauss-Kahn as a "seducer," a "ladies' man," a "charmer" make it hard not to conclude that the guy's a creep in a way that's uncomfortably reminiscent of Bill Clinton back before he got to work on his image as an elder statesman. And even if you think Clinton shouldn't have been impeached for a blow job, it's hard to shake the sense that we've been all too quick to shrug off his long history of questionable treatment of women as a "private failing" that should be forgiven and forgotten. Indeed, Clinton has redeemed himself entirely in the eyes of most progressives, thanks in no small part to the Clinton Global Initiative. But not in the eyes of all, as Lauren Collins explains:

The reason I haven't ever gotten over Bill Clinton's affair with Monica Lewinsky, and probably never will, is not because I am a Puritan or an American or a right-wing conspirator, but because it constituted such a breath-taking abuse of power: when the President, who also happens to be the boss, decides to deploy all of the resources at his disposal in the seduction of an intern, who but the steeliest intern could expect to hold her own?

Who indeed? As Hungarian economist Piroska Nagy, with whom Strauss-Kahn had an affair in 2008, wrote in a letter to IMF investigators, she was "damned if I did and damned if I didn't" engage in the affair. Clearly, intimidation and abuse of power can occur even at the highest levels of professional institutions. Recognizing and talking about the relationship between sex, gender, and power in a way that attempts a nuanced approach to sexual politics is far from Puritan, and trotting out the standard narrative of "puritanism" versus "private lives" isn't enough. There's not really a heuristic for taking sexual politics seriously, no simple set of rules to follow. But the fact of the matter is that as long as the power dynamics of gender -- and they are legion -- remain skewed, questions of consent and coercion will too. So while the Strauss-Kahn scandal is prompting the French to rethink attitudes towards powerful men's sexual behavior, it should serve as an opportunity for reflection on this side of the Atlantic as well.