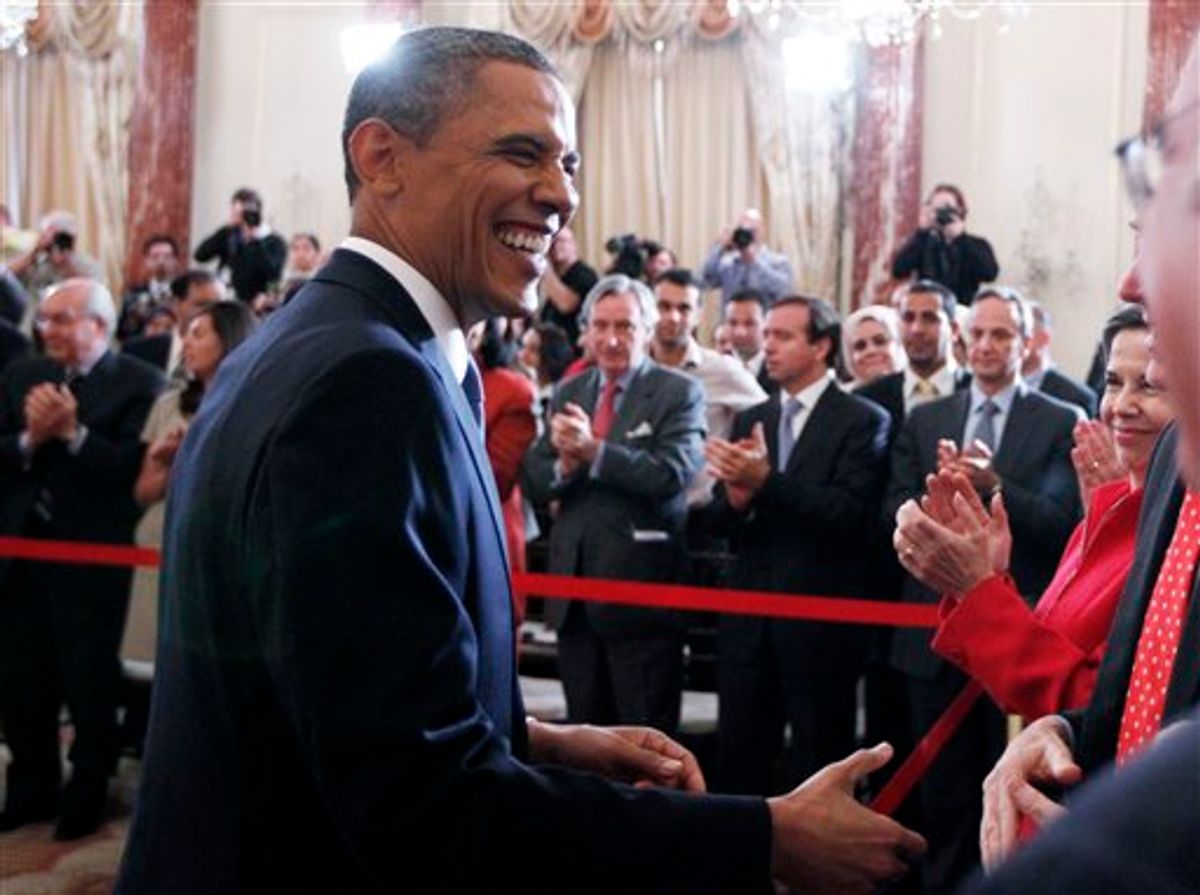 When I wrote earlier this week about Jane Mayer's New Yorker article on the Obama administration's war on whistleblowers, the passage I hailed as "the single paragraph that best conveys the prime, enduring impact of the Obama presidency" included this observation from Yale Law Professor Jack Balkin:  "We are witnessing the bipartisan normalization and legitimization of a national-surveillance state."  There are three events -- all incredibly from the last 24 hours -- which not only prove how true that is, but vividly highlight how it functions and why it is so odious.

First, consider what Democrats and Republicans just jointly did with regard to the Patriot Act, the very naming of which once sent progressives into spasms of vocal protest and which long served as the symbolic shorthand for Bush/Cheney post-9/11 radicalism:

Top congressional leaders agreed Thursday to a four-year extension of the anti-terrorist Patriot Act, the controversial law passed after the Sept. 11 attacks that governs the search for terrorists on American soil.

The deal between Senate Majority Leader Harry Reid and House Speaker John Boehner calls for a vote before May 27, when parts of the current act expire. The idea is to pass the extension with as little debate as possible to avoid a protracted and familiar argument over the expanded power the law gives to the government. . . .

From its inception, the law's increased surveillance powers have been criticized by liberals and conservatives alike as infringements on free speech rights and protections against unwarranted searches and seizures.

Some Patriot Act opponents suggest that Osama bin Laden's demise earlier this month should prompt Congress to reconsider the law, written when the terrorist leader was at the peak of his power. But the act's supporters warn that al-Qaida splinter groups, scattered from Pakistan to the United States and beyond, may try to retaliate.

"Now more than ever, we need access to the crucial authorities in the Patriot Act," Attorney General Eric Holder told the Senate Judiciary Committee.

This will be the second time that the Democratic Congress -- with the support of President Obama (who once pretended to favor reforms) -- has extended the Patriot Act without any changes.  And note the rationale for why it was done in secret bipartisan meetings:  to ensure "as little debate as possible" and "to avoid a protracted and familiar argument over the expanded power the law gives to the government."  Indeed, we wouldn't want to have any messy, unpleasant democratic debates over "the expanded power the law gives to the government."  Here we find yet again the central myth of our political culture:  that there is too little bipartisanship when the truth is there is little in Washington but that. And here we also find -- yet again -- that the killing of Osama bin Laden is being exploited to justify a continuation, rather than a reduction, in the powers of the National Security and Surveillance States.

Next we have a new proposal from the Obama White House to drastically expand the scope of "National Security Letters" -- the once-controversial and long-abused creation of the Patriot Act that allows the FBI to obtain private records about American citizens without the need for a subpoena or any court approval -- so that it now includes records of your Internet activities:

The Obama administration is seeking to make it easier for the FBI to compel companies to turn over records of an individual's Internet activity without a court order if agents deem the information relevant to a terrorism or intelligence investigation.

The administration wants to add just four words -- "electronic communication transactional records" -- to a list of items that the law says the FBI may demand without a judge's approval. Government lawyers say this category of information includes the addresses to which an Internet user sends e-mail; the times and dates e-mail was sent and received; and possibly a user's browser history. . .

Stewart A. Baker, a former senior Bush administration Homeland Security official, said the proposed change would broaden the bureau's authority. "It'll be faster and easier to get the data," said Baker, who practices national security and surveillance law. "And for some Internet providers, it'll mean giving a lot more information to the FBI in response to an NSL." . . .

To critics, the move is another example of an administration retreating from campaign pledges to enhance civil liberties in relation to national security. The proposal is "incredibly bold, given the amount of electronic data the government is already getting," said Michelle Richardson, American Civil Liberties Union legislative counsel.

The critics say its effect would be to greatly expand the amount and type of personal data the government can obtain without a court order. "You're bringing a big category of data -- records reflecting who someone is communicating with in the digital world, Web browsing history and potentially location information -- outside of judicial review," said Michael Sussmann, a Justice Department lawyer under President Bill Clinton who now represents Internet and other firms.

So first they conspire with the GOP to extend the Patriot Act without any reforms, then seek to expand its most controversial and invasive provisions to obtain the Internet activities of American citizens without having to bother with a subpoena or judicial approval -- "they" being the Democratic White House.

Most critically, the government's increased ability to learn more and more about the private activities of its citizens is accompanied -- as always -- by an ever-increasing wall of secrecy it erects around its own actions.  Thus, on the very same day that we have an extension of the Patriot Act and a proposal to increase the government's Internet snooping powers, we have this:

The Justice Department should publicly release its legal opinion that allows the FBI to obtain telephone records of international calls made from the U.S. without any formal legal process, a watchdog group asserts.

The nonprofit Electronic Frontier Foundation alleges in a lawsuit filed Thursday that the Justice Department's Office of Legal Counsel violated federal open-records laws by refusing to release the memo.

The suit was prompted in part by McClatchy's reporting that highlighted the existence of the memo and the department's refusal to release it. Earlier this year, McClatchy also requested a copy and was turned down.

The decision not to release the memo is noteworthy because the Obama administration -- in particular the Office of Legal Counsel -- has sought to portray itself as more open than the Bush administration was. By turning down the foundation's request for a copy, the department is ensuring that its legal arguments in support of the FBI's controversial and discredited efforts to obtain telephone records will be kept secret.

What's extraordinary about the Obama DOJ's refusal to release this document is that it does not reveal the eavesdropping activities of the Government but only its legal rationale for why it is ostensibly permitted to engage in those activities.  The Bush DOJ's refusal to release its legal memos authorizing its surveillance and torture policies was unquestionably one of the acts that provoked the greatest outrage among Democratic lawyers and transparency advocates (see, for instance, Dawn Johnsen's scathing condemnation of the Bush administration for its refusal to release OLC legal reasoning: "reliance on 'secret law' threatens the effective functioning of American democracy" and "the withholding from Congress and the public of legal interpretations by the Justice Department Office of Legal Counsel (OLC) upsets the system of checks and balances between the executive and legislative branches of government."

The way a republic is supposed to function is that there is transparency for those who wield public power and privacy for private citizens.  The National Security State has reversed that dynamic completely, so that the Government (comprised of the consortium of public agencies and their private-sector "partners") knows virtually everything about what citizens do, but citizens know virtually nothing about what they do (which is why WikiLeaks specifically and whistleblowers generally, as one of the very few remaining instruments for subverting that wall of secrecy, are so threatening to them).  Fortified by always-growing secrecy weapons, everything they do is secret -- including even the "laws" they secretly invent to authorize their actions  -- while everything you do is open to inspection, surveillance and monitoring.

This dynamic threatens to entrench irreversible, absolute power for reasons that aren't difficult to understand.  Knowledge is power, as the cliché teaches.  When powerful factions can gather unlimited information about citizens, they can threaten, punish, and ultimately deter any meaningful form of dissent:  J. Edgar Hoover infamously sought to drive Martin Luther King, Jr. to suicide by threatening to reveal King's alleged adultery discovered by illicit surveillance; as I described earlier today in my post on New York's new Attorney General, Eliot Spitzer was destroyed in the middle of challenging Wall Street as the result of a massive federal surveillance scheme that uncovered his prostitution activities.  It is the rare person indeed with nothing to hide, and allowing the National Security State faction unfettered, unregulated intrusive power into the private affairs of citizens -- as we have been inexorably doing -- is to vest them with truly awesome, unlimited power.

Conversely, allowing government officials to shield their own conduct from transparency and (with the radical Bush/Obama version of the "State Secrets privilege") even judicial review ensures that National Security State officials (public and private) can do whatever they want without any detection and (therefore) without limit or accountability.  That is what the Surveillance State, at its core, is designed to achieve: the destruction of privacy for individual citizens and an impenetrable wall of secrecy for those with unlimited surveillance power.  And as these three events just from the last 24 hours demonstrate, this system -- with fully bipartisan support --- is expanding more rapidly than ever.


UPDATE:  I confused the timing of the second incident I mentioned here:  the White House's proposal to expand NSL's to include Internet records.  That actually occurred last July.  But I also neglected to include in this list the Obama White House's September demands that all ISP's and manufacturers of electronic communication devices (such as Blackberries) provide "backdoors" for government surveillance, so that bolsters the points I made here.


UPDATE II:  So patently illegal is Obama's war in Libya as of today that media reports are now coming quite close to saying so directly; see, for instance, this unusually clear CNN article today from Dana Bash.  As a result, reporters today bombarded the White House with questions about the war's legality, and here is what happened, as reported by ABC News' Jake Tapper:

Talk about "secret law."  You're not even allowed to know the White House's rationale (if it exists) for why this war is legal.  It simply decrees that it is, and you'll have to comfort yourself with that.  That's how confident they are in their power to operate behind their wall of secrecy: they don't even bother any longer with a pretense of the most minimal transparency.