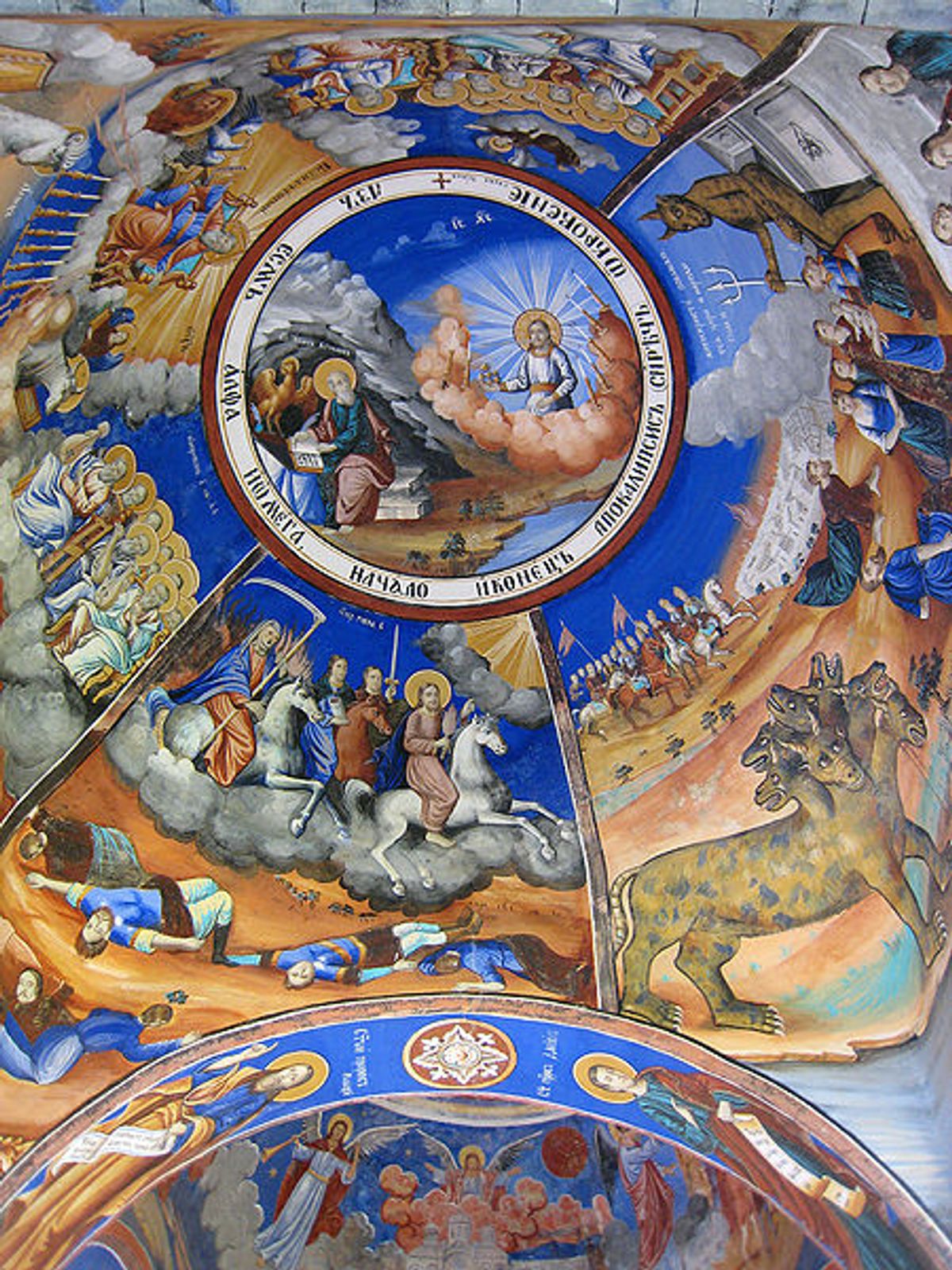 On Saturday, so the latest apocalypse theory holds, a few hundred million faithful Christians will be lifted into heaven during an event called the Rapture. What follows is a time of tribulation, wherein anyone not saved will confront all manner of atrocities. Of course most, including mainstream Christian denominations, have denounced these prophecies as absurd.

But we say: Better safe than sorry.

Just in case you're facing a sea of hellfire in the coming hours, we've found answers to frequently asked questions about the end of days, and compiled some tips for surviving.

Let's say I don't get raptured. How bad will things get?

Can you be more specific?

Well, this -- as most things related to the Bible -- seems open to interpretation. But there are a few apocalyptic events you should probably be prepared for.

Earthquakes: According to radio minister Harold Camping and his followers, once the Rapture occurs there will be a massive, worldwide earthquake. At least one believer says that the tremor will start on the Pacific Rim around 6 p.m. (local time) on Saturday, then cascade westward across the globe, striking at precisely 6 p.m. in each time zone. So at least you know when to be prepared.

But how do you survive?

If we assume that this particular seismic event is one of biblical proportions, then making it out in one piece could prove tricky. However, there are a few steps you can take to improve your chances. According to the Centers for Disease Control and Prevention, being prepared is half the battle. Plan your survival strategy beforehand, so when the clock strikes 6 p.m., you aren't caught with your pants down (literally or figuratively). Your best shot of staying alive is in an open, outdoor area. Try to stand someplace where there are no preciously placed objects overhead that might collapse during the shock and squash you. If you have any important items -- contact information, medical supplies, rosary beads -- that you think might help in a post-apocalyptic landscape, have them close by to conserve time when disaster strikes.

How do I survive post-earthquake?

Hundreds of millions of people have just vanished in the Rapture -- including, possibly, a national leader or two -- and those left behind are likely going to be shocked, then confused, then hysterical. According to the sixth chapter of Revelation, once the end-times begin, the Earth will be swept up by a brutal combination of conquest, war, pestilence and death (personified by those villainous four horsemen).

This will be a time of great violence. Depending on whichever post-apocalyptic depiction you've seen in the media (and are inclined to believe) be prepared to battle off one or more of the following: biker gangs, cannibals, zombies, vampires, pan-dimensional sorcerers -- or, more likely, just a lot of confused and freaked-out normal people who are desperate to survive. Stock up on weapons to protect yourself. (But don't be evil. Use them only to protect yourself.)

What's up with the asteroids?

If all the unmitigated disease, starvation and slaughter weren't bad enough, there's also the matter of three heavenly bodies on a collision course with Earth (as described in the eighth chapter of Revelation). The first will slam into a land mass, burning one-third of all the world's vegetation. The second will plunk into the ocean, killing a third of all aquatic life and soaking the seas in blood. Finally, the third -- a star called "Wormwood" -- will broadside our fair planet, poisoning one-third of all fresh water.

A few survival tips: Starting with the first impact, you'll need to find somewhere safe to lay low for a while. (Cold War-era bomb shelters could do the trick.) Wherever you end up, make sure it's underground, but not choked off from air. It should be strong enough that it won't collapse under pressure, since rocks ejected by the impact will be raining down for some time. The atmosphere will be super hot in the immediate aftermath -- remember, it's going to burn a third of the world's trees -- so get those cool compresses ready.

Hopefully your shelter is located inland, because the second space rock -- the one that's going to slam into the ocean -- will trigger tsunamis that could make survival difficult for anyone on the coasts. Stockpile food, water and other supplies you'll need, because you're going to be underground for several weeks. (And, even afterward, the food is all dead, and the water poisoned, so subsisting off the land isn't much of an option.) Don't try to venture out of your shelter for a month or more. But, if you must go outside, breathe through a damp clothe to filter out all the harmful particles floating around in the air.

The aforementioned impacts threw massive volumes of reflective sulfur compounds into the upper atmosphere. As such, sunlight is probably going to be in short supply. The eighth chapter of Revelation foretells as much, noting that the sun, the moon and all of the stars will lose one-third of their brightness. In practical terms, this means that it's going to get very cold.

How Stuff Works notes that, when confronted with freezing temperatures, it's important to cover as much of your body as possible to retain heat. Don't overexert yourself; you'll want to keep up your energy reserves. Wear multiple layers of loose clothing. That way you maintain optimal temperature by shedding or adding articles as necessary. Choose insulating fabrics that will stay dry.

Additionally, now that the final heavenly bodies have struck, you should move toward the coast, since oceans retain heat, and regions near them will tend to be warmer. Fire and shelter also wouldn't hurt.

When will I be able to shop again?

After the atmosphere has cleared up a little bit, some semblance of civilization can, maybe, resume. But all is not well, because here's the part where the antichrist bursts on the scene. According to the 13th chapter of Revelation, the so-called "beast" will ascend to the pinnacle of worldly power, and institute a new economic order. When that happens, every person will be required to bear a mark ("666") on their right hand in order to buy or sell anything.

All those who receive this mark known as "the mark of the beast" are doomed for eternity. By taking this mark you are swearing allegiance to the anti-christ. You may as well attempt to enjoy life as best you can because eternity for you will be hell.

Likewise, "those who receive this mark will develop a loathsome and malignant sore on their bodies within a short period of time." So, yeah, don't get that mark. If you hadn't already, now would probably be a good time to stockpile any goods you'll need for the foreseeable future.

Which sides do I choose during the final battles?

At some point, the armies of good and evil will engage in one final epic battle, called Armageddon. If you're keen on surviving, it might be a good idea to lay low.

Do I need to worry about zombies?

So far as we can tell, Revelations doesn't say much about the living dead. But, since zombies are the subject of much speculation, you're probably wondering what to do if, during tribulation, you're confronted by a walking corpse that wants to eat you. Luckily, the CDC has compiled a helpful primer for making it out alive. (Seriously.)

How long am I supposed to keep this up?

It depends on whom you ask. Harold Camping says that the universe will be destroyed five months after the Rapture. Other theories, however, suggest that the tribulation will last seven years.

RaptureReady.com has this advice:

Stock up on food, medicines, living supplies, weaponry and gold. You will need enough for 7 years. Don't plan on being able to supplement your food with hunting and fishing because the stocks of wild animals and fish will have been depleted and destroyed by the 3 1/2 year worldwide drought and three successive meteor-like or comet-like objects that strike the earth sometime after the rapture.

Let's say I do survive the tribulation. Any chance I can redeem myself and earn a ticket to heaven?

Camping & co. argue that once the Rapture has occurred, the ship has sailed on salvation. All you can do is try to survive as long as possible, given the hellish circumstances. Once you bite the bullet, damnation awaits. Other interpretations, however, suggest a whole slew of post-Rapture finalities, many of them significantly more optimistic.

Perhaps, if you build a large enough cache of dehydrated foodstuffs and water, and you manage to avoid the agents of darkness -- all the while, you remain in the good graces of the almighty -- the afterlife could be your oyster.