Obama and Netanyahu discuss their differences

After meeting with Israeli PM at the White House, president says such disagreements happen "between friends" 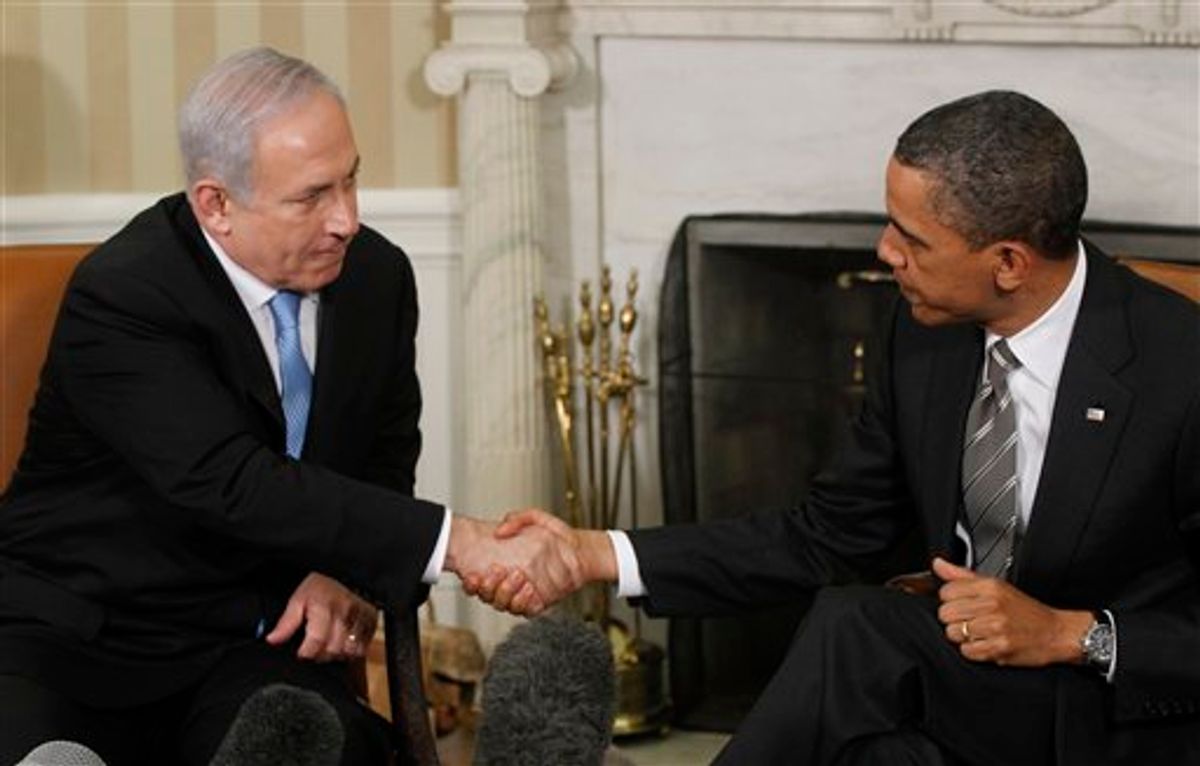 President Barack Obama is conceding that he has differences with Israeli Prime Minister Benjamin Netanyahu on a future state for Palestinians but that such disagreements happen "between friends."

Obama spoke after a lengthy meeting with Netanyahu in the Oval Office. Both men greeted reporters with smiles despite the deep tension surrounding their talks.

The two leaders spoke after Obama declared in a speech Thursday that the United States supports creation of a Palestinian state based on the border lines that existed before the 1967 Six Day War in which Israel forces occupied east Jerusalem, the West Bank and Gaza.

Netanyahu said Israel can make some concessions but cannot return to the 1967 borders, which he called "indefensible."

Sharply at odds over terms for Middle East peace, President Barack Obama and Israeli Prime Minister Benjamin Netanyahu met in the Oval Office Friday in an encounter likely to produce little more than frustrations for both men.

They spoke on the day after Obama for the first time endorsed the Palestinians' demand that their eventual state be based on borders that existed before the 1967 Six Day War in which Israel forces occupied east Jerusalem, the West Bank and Gaza.

Netanyahu dismissed that position as "indefensible," saying it would leave major Jewish settlements outside Israel. Then he boarded a plane for his long-scheduled visit to Washington, vowing to seek clarifications in his meeting with Obama at the White House. He arrived in Washington early Friday.

The encounter was pitting a president deeply frustrated with a peace effort in shambles against an Israeli leader confronted by a Palestinian government he says he cannot do business with.

International pressure is growing on both to answer the demands of the Palestinian people as revolts sweeping the Arab world crest against Israel itself. Palestinian protesters marched on the Jewish state's borders this week, and at least 15 people were killed.

Against that backdrop, Obama was aiming "to try to convince Netanyahu and the Israelis that there's a greater urgency in reaching agreement with the Palestinians because of the dramatic changes under way in the region and greater diplomatic pressures and efforts to isolate Israel and delegitimize its existence," said Haim Malka, deputy director of the Middle East program at the Center for Strategic and International Studies.

Netanyahu was informed shortly before Obama's speech of its contents by Secretary of State Hillary Rodham Clinton, according to U.S. officials. Netanyahu sought in vain to get the border language removed from the speech, the officials said, and was incensed when he was told it was staying in. One official described Netanyahu's reaction as "passionate." The officials spoke on condition of anonymity to discuss a sensitive diplomatic exchange.

Netanyahu's tough response to Obama's speech "expresses disappointment at the absence of central items that Israel had demanded, primarily the (Palestinian) refugees," a senior Israeli official, speaking on condition of anonymity because he was not free to discuss U.S. policy on the record, told reporters traveling with the prime minister.

The official said Netanyahu was disappointed the speech did not address the Palestinian demand to repatriate to Israel millions of Palestinians, most descendants of people who were driven from or fled homes in the war over the Jewish state's 1948 creation.

Obama's stance on the 1967 borders was not a major policy change, since the U.S -- along with the international community and even past Israeli governments -- previously have agreed to building on the 1967 lines.

But it was the first time he'd explicitly endorsed those borders as a starting point, a position Netanyahu rejects, and raised fears among some in the Israeli government of further U.S. concessions to Palestinian demands. Obama said Israel can never be a truly peaceful Jewish state if it insists on "permanent occupation." But he did say the 1967 borders should be accompanied by land swaps agreed to by both sides, which could accommodate existing Jewish settlements.

Obama was unsparing, too, in his words for the Palestinian leadership, repudiating its pursuit of unilateral statehood through the United Nations and questioning its alliance with a Hamas faction bent on Israel's destruction. It was not immediately clear, however, whether Obama's statement on the 1967 borders as the basis for negotiations -- something the Palestinians have long sought -- would be sufficient to persuade the Palestinians to drop their quest for U.N. recognition.

Palestinian negotiator Saeb Erekat said Palestinian President Mahmoud Abbas was consulting with officials in a number of Arab countries to discuss a response to Obama's speech. Erekat said Abbas wants to hear from the Arab world before convening the Palestinian leadership.

Asked whether the parameters laid out by Obama are enough to entice the Palestinians to return to talks and drop their bid for U.N. recognition, Erekat said it's too early to consider such a step.

Obama's blunt attempt to steer the peace effort was a major change in tactics from a president who has avoided imposing any U.S. plan but is now running out of patience and reasons to be subtle. Seeking to shake up a dynamic of mutual blame for the stalled peace talks, Obama pushed both sides to accept his starting point -- borders for Palestine, security for Israel -- and get back to solving a stalemate "that has grinded on and on and on."

"The international community is tired of an endless process that never produces an outcome," the president said Thursday at the State Department. "At a time when the people of the Middle East and North Africa are casting off the burdens of the past, the drive for a lasting peace that ends the conflict and resolves all claims is more urgent than ever."

That doesn't mean resolution is anywhere in sight.

Ahead of his trip to Washington, Netanyahu delivered a speech to his parliament in which he made clear his opposition to talks with a newly constituted Palestinian government that shares power between the mainstream Palestinian Fatah faction led by Abbas and the radical Hamas movement that rules Gaza. He also made a series of demands that the Palestinians -- and especially Hamas -- are not likely to meet. Among them were dropping their claim to east Jerusalem, their would-be capital, and recognizing Israel as the Jewish homeland.

Palestinians, for their part, refuse to negotiate while Israel continues to expand Jewish enclaves in the West Bank and east Jerusalem, which the Palestinians want to be part of an eventual state. Israel refuses to freeze settlement construction, saying the matter should be resolved through negotiations.

But Obama had no solution to the question of Hamas, and no blueprint for how to solve enormous conflicts over the status of Jerusalem and the fate of Palestinian refugees. The border issue, he conceded, was just a start.