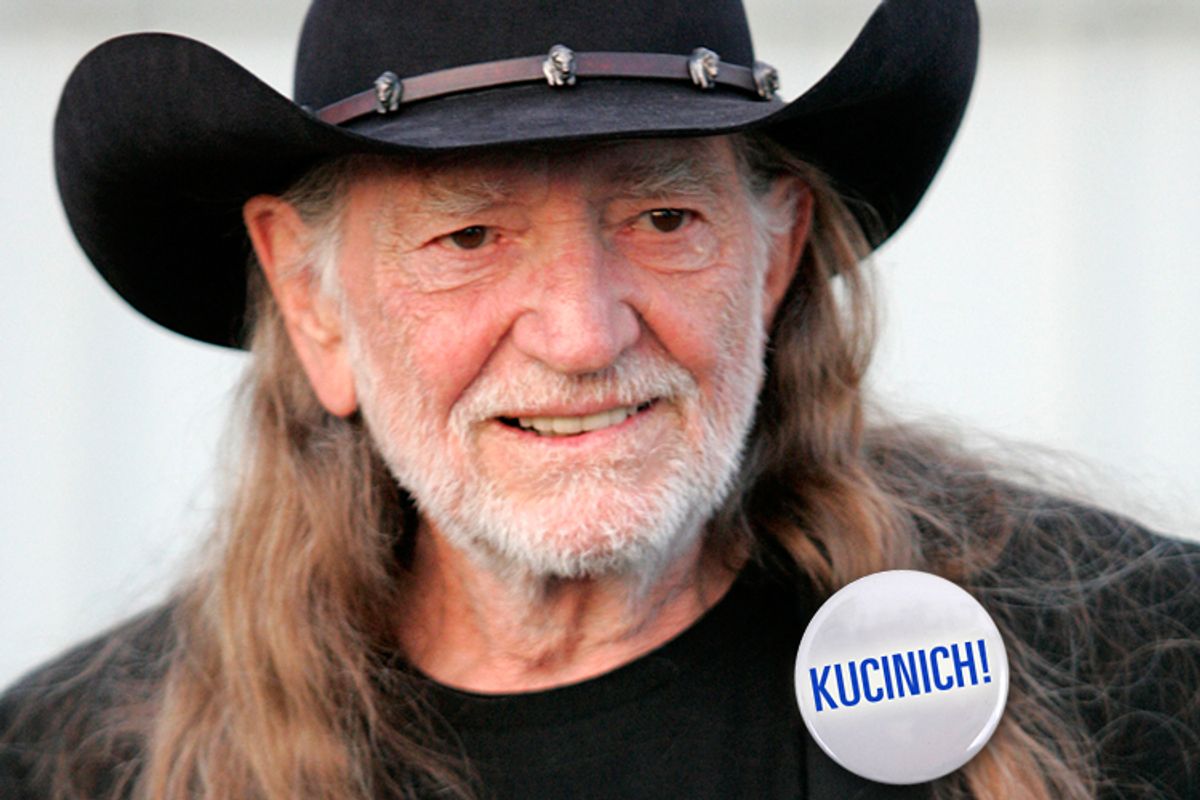 Gary Johnson, the obscure libertarian seeking the Republican presidential nomination, seemed primed for a high-profile breakthrough when he secured Willie Nelson’s endorsement earlier this week. But then Nelson recanted -- or forgot, or just decided to back off for a bit in case Dennis Kucinich, the candidate he backed last time, happens to run again.

This may actually be a blessing for Johnson -- when it comes to presidential politics, Willie has a long history of casting his lot with the losers. Here’s a recap of the redheaded stranger’s political endorsements:

Jimmy Carter, 1980: Evidently, Carter viewed Nelson's support as a key selling point. Two months before Election Day, the embattled president, who was running slightly behind Ronald Reagan in polls, left a speaking engagement by helicopter so that he could attend a Nelson concert at the Merriwether Post Pavilion in Columbia, Md. Carter joined Nelson onstage for a rendition of "Amazing Grace." When Carter's mother broke her hip a few weeks later, the president publicly thanked Willie for sending a bouquet of flowers to her hospital room. He then asked that no more flowers be sent so that she'd have "room to breathe."

Walter Mondale, 1984: Nelson appeared at a Memorial Day telethon in support of Mondale, who was then on his way to capturing the Democratic nomination to oppose Ronald Reagan. This prompted Republican National Committee Chairman Frank Fahrenkopf Jr. to warn Republicans of a "savage and self-serving Democrat attack" by "Hollywood left-wingers" and to suggest jamming the lines "to let the Democrats know you support President Reagan."

Ross Perot, 1992: Nelson was eager to pitch in when Perot's fledgling independent candidacy took off like a rocket in the spring of 1992. But as Ed Rollins, who was one of Perot's campaign chiefs, later reported in his book "Bare Knuckles and Back Rooms," the candidate hardly approved. When told Nelson would take part in one big campaign event, Perot told Rollins: "He’s a dope smoker and doesn’t pay his taxes. I don't want him here."

Bill Clinton, 1996: Despite endorsing the Clinton-Gore team for a second term, Nelson wouldn’t perform at a Nashville birthday party for Tipper Gore, who had alienated the music industry with her crusade for parental advisory labels. Nelson was hardly alone, and the creator of the "Tipper-sticker" had to settle for singer-songwriter Gretchen Peters to entertain her guests.

Ralph Nader, 2000: Late in the campaign, Nader accused Gore of calling Nelson, and some of his other celebrity supporters (Eddie Vedder, Susan Sarandon and Phil Donahue among them), to see if they would be open to shifting their support to his campaign. Nelson -- and the others -- stayed put.

Dennis Kucinich, 2004: This was a busy endorsement season for Nelson, who also threw his weight behind Texas gubernatorial candidate Kinky Friedman, the singer, songwriter and occasional mystery novel writer who had once called ballet "basketball for homosexuals." Friedman actually finished fourth in the race with 12 percent of the vote. Had he won, Friedman said he intended to make Nelson his energy czar.

Dennis Kucinich, 2008: Nelson endorsed the Ohio congressman and then joined him in a lawsuit challenging a loyalty oath the Texas Democratic Party imposes on candidates seeking the party’s nomination -- but the oath was ultimately upheld in court.