Waiting for the end of the world...

...and waiting, and waiting. We're at Harold Camping's home base as the big day arrives 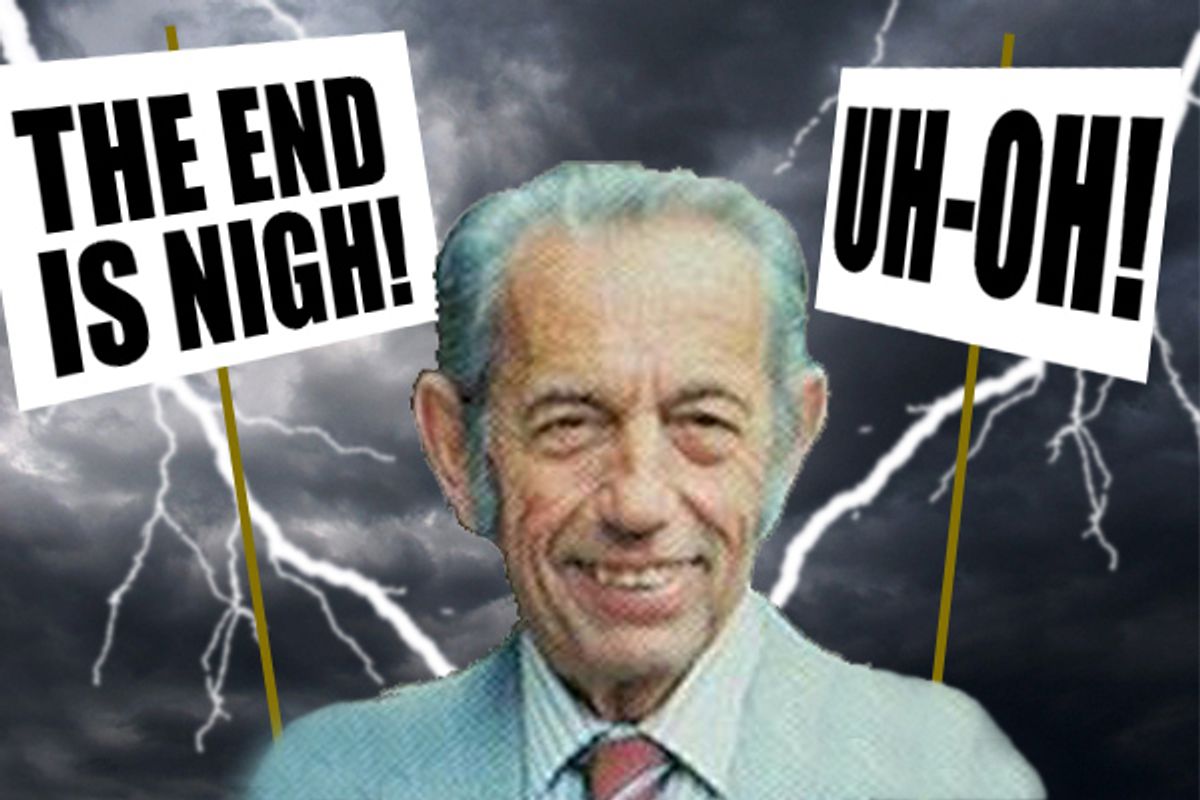 OAKLAND -- The headquarters of Harold Camping's Family Radio, devoted in the last few years to warning that the End will come on 6 p.m., May 21, 2011, is deserted when the time comes.

It's 10 p.m. Pacific Standard Time on Friday night on the industrial strip where Family Radio is based, flanked by a sushi joint and a palm reading place. A few doors down is a prosperous-looking business called weGrow, which describes itself as the first full service hydroponic superstore. Down the street is the Coliseum ballpark, home of the Oakland A's, who are across the bay in San Francisco tonight before a crowd of thousands who decided to spend their final Friday night watching the A's take on the Giants.

Camping -- the octogenarian numerologist whose calculations spawned a worldwide movement (of indeterminate size) devoted to warning non-believers to prepare for the return of Christ, or else -- recently told a reporter that the end of the world would begin at exactly 6 p.m. on May 21 in each time zone around the globe. That means the end should be beginning right about now in the South Pacific archipelago of Tonga, where it's 6 p.m., May 21, 2011.

Here's what's supposed to be happening, according to Camping's website:

"A great earthquake will occur the Bible describes it as 'such as was not since men were upon the earth, so mighty an earthquake, and so great.' This earthquake will be so powerful it will throw open all graves. The remains of the all the believers who have ever lived will be instantly transformed into glorified spiritual bodies to be forever with God."

I check the U.S. Geological Survey's up-to-the-minute tracker of worldwide earthquakes over magnitude 5.0. A few hours ago, a 5.1 quake hit in the south Sandwich Islands region off South America, but there's nothing recent near Tonga.

I'm not sure CNN has a Tonga correspondent, but if something is going down there, the network hasn't picked it up yet. Its lead story is, "Accused ex-IMF chief in home detention."

This appears to be beginning of the unraveling of Camping's prediction -- the second time he's been wrong. Last time, he predicted the world was going to end on Sept. 6, 1994. When that didn't happen, Camping said he had miscalculated.

I'm wondering what the homeless Camping devotee I met earlier this week -- the one who told me he believes he may be the messiah -- is thinking right now. Even the PETA activists who were outside Family Radio earlier offering vegan Last Supper meals are now gone.

Some member of Camping's staff with a sense of understatement put up this sign on Family Radio's front door: If anything the most memorable thing about the night so far has been the unprecedented levels of Twitter snark:

All you people making rapture jokes are gonna feel like real assholes if that shit goes down. Just sayin.

I guess there's nothing to do now but register for the Oakland Atheists' Rapture Day party Saturday ...