Senior officials will try to bypass negotiations with Israel, calling such efforts fruitless 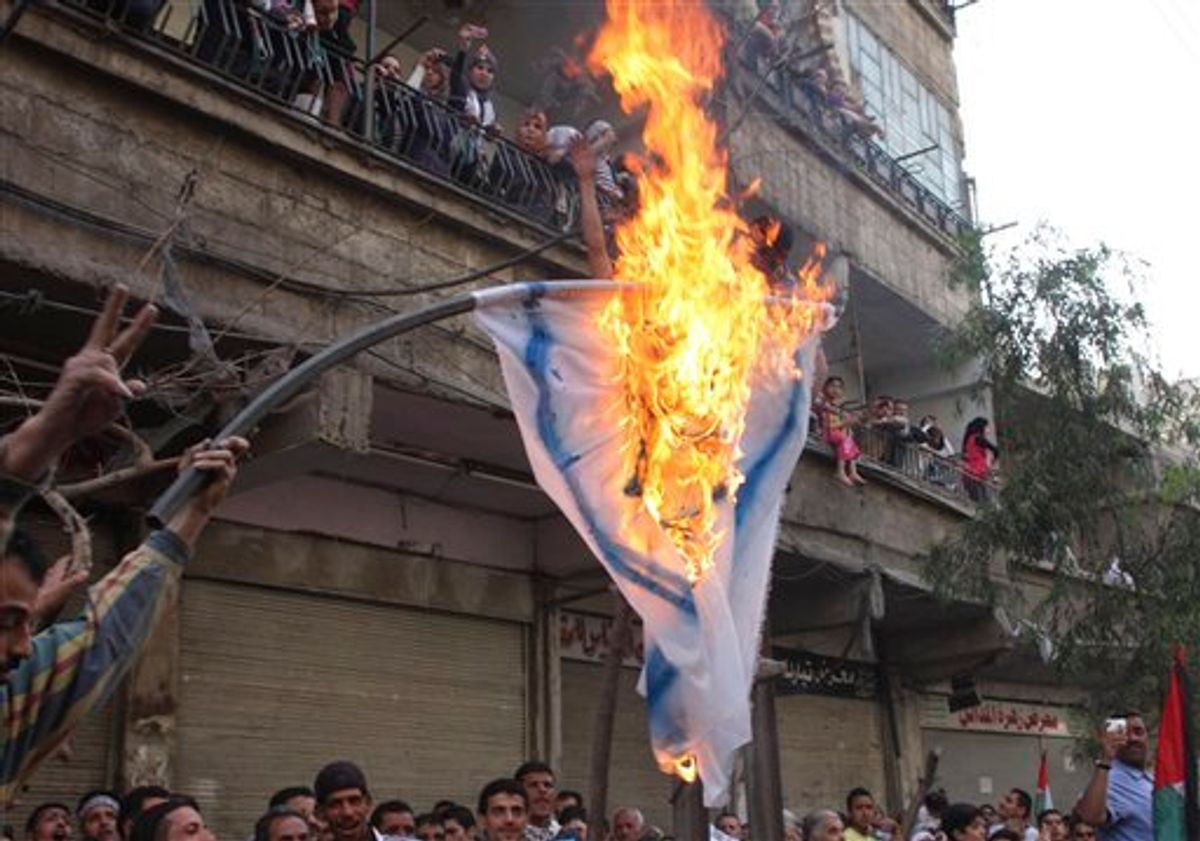 Palestinian mourners burn an Israeli flag during a funerla procession of three Palestinians who killed when Israeli soldiers opened fire on Sunday at protesters who approached the village of Majdal Shams at Syria's border with the Israeli-controlled Golan Heights, at Yarmouk Palestinian refugee camp in Damascus, Syria, on Monday May 16 2011. Israeli troops clashed with Arab protesters along three hostile borders on Sunday, leaving people dead and dozens wounded in an unprecedented wave of violence marking the anniversary of the mass displacement of Palestinians surrounding Israel's establishment in 1948. (AP Photo/Bassem Tellawi) (AP)
--

Israeli Prime Minister Netanyahu's stance only strengthened the Palestinian resolve to bypass such talks, largely deadlocked since 2008, and seek recognition of a state at the U.N. instead, said Nabil Shaath, an aide to Palestinian President Mahmoud Abbas.

However, Abbas himself has not given his official response to parameters for a Mideast peace deal that Obama laid out in a speech on Thursday, and it remains unclear whether the Palestinian leader would now consider abandoning the U.N. bid.

Since the speech, Abbas has been consulting by phone with Arab leaders. He plans to meet with Jordan's King Abdullah II on Saturday and then convene the leaders of the PLO and his Fatah movement later in the week before giving a response, Abbas aide Saeb Erekat said.

In his speech, Obama said that border talks must be held on the basis of Israel's frontier in 1967, before it captured the West Bank, Gaza and east Jerusalem.

The Palestinians want to establish their state in the territories Israel has occupied since that war. Recognition of the 1967 line as the starting point, while allowing for mutually agreed land swaps, has been a long-standing Palestinian demand.

A U.S. official, speaking on condition of anonymity, has said endorsing the pre-1967 cease-fire line was done in the hopes of dissuading the Palestinians from going ahead with their U.N. plan.

Obama warned the Palestinians in his speech that their U.N. bid would be pointless and said he expected more explanations from Abbas about his reconciliation with the Islamic militant Hamas, which refuses to recognize Israel.

Netanyahu laid out hardline positions after his meeting with Obama at the White House on Friday. He said the 1967 borders were "indefensible," that the Palestinians could forget about resettling Palestinian refugees in Israel and that Abbas would have to choose between peace with Israel and reconciliation with Hamas.

"The issue of the 1967 borders, which Obama raised, is an issue that did not influence in the past, and will not influence now, the deep friendship and the natural partnership between Israel and the United States," Israeli news site Nana quoted Ayalon as saying Saturday.

Erekat said late Friday that Netanyahu's statements make it clear the Israeli leader is not a partner for peace, suggesting there is no point in returning to negotiations.

"I don't think we can talk about a peace process with a man who says the 1967 lines are an illusion, that Jerusalem will be the capital of Israel, undivided, and he does not want a single (Palestinian) refugee to go back," Erekat said. "What is left to negotiate about?"

Erekat said it was too soon to say whether the Palestinians would continue with their quest for U.N. recognition in September. A bid to become a U.N. member requires approval not just from the General Assembly, where the Palestinians might win the needed majority, but also from the U.N. Security Council, where the U.S. might veto such a step.

However, Shaath said after the Netanyahu-Obama meeting that "we will escalate our diplomatic efforts to get the recognition of the Palestinian state."

Hanan Ashrawi, a member of the PLO Executive Committee, said she believes Abbas will be under public pressure to proceed with the bid for U.N. recognition, especially after Netanyahu's latest comments. The committee is one of the groups Abbas is to consult with.

"I personally predict public opinion is bent on going to the U.N.," Ashrawi said. "Netanyahu managed to undermine every single attempt at launching serious negotiations."

Abbas has refused in the past to negotiate with Netanyahu unless the Israeli leader freezes settlement construction in the territories occupied in 1967. Netanyahu has declined to do so, at most slowing construction in some areas for 10 months last year.

Obama, meanwhile, demanded answers from Abbas about his reconciliation deal with Hamas, which has not softened its hardline stance as part of the reconciliation.

Shaath said reconciliation is an internal Palestinian issue and that the efforts by Hamas and Abbas' Fatah movement to form a joint transition government would continue.

"We will form a technocrat government which we said will not include either Fatah or Hamas, and will have specific duties, which are preparing for elections and rebuilding Gaza," Shaath said.

Abbas has argued that he, not Hamas, would represent Palestinians in negotiations.

Also Saturday, the Israeli military said troops fired on a Gaza man who crawled suspiciously toward the territory's fence with Israel. The military said it was not clear if the man was killed.

Gaza officials said they were waiting for Israeli clearance to approach the border area to search for a body.