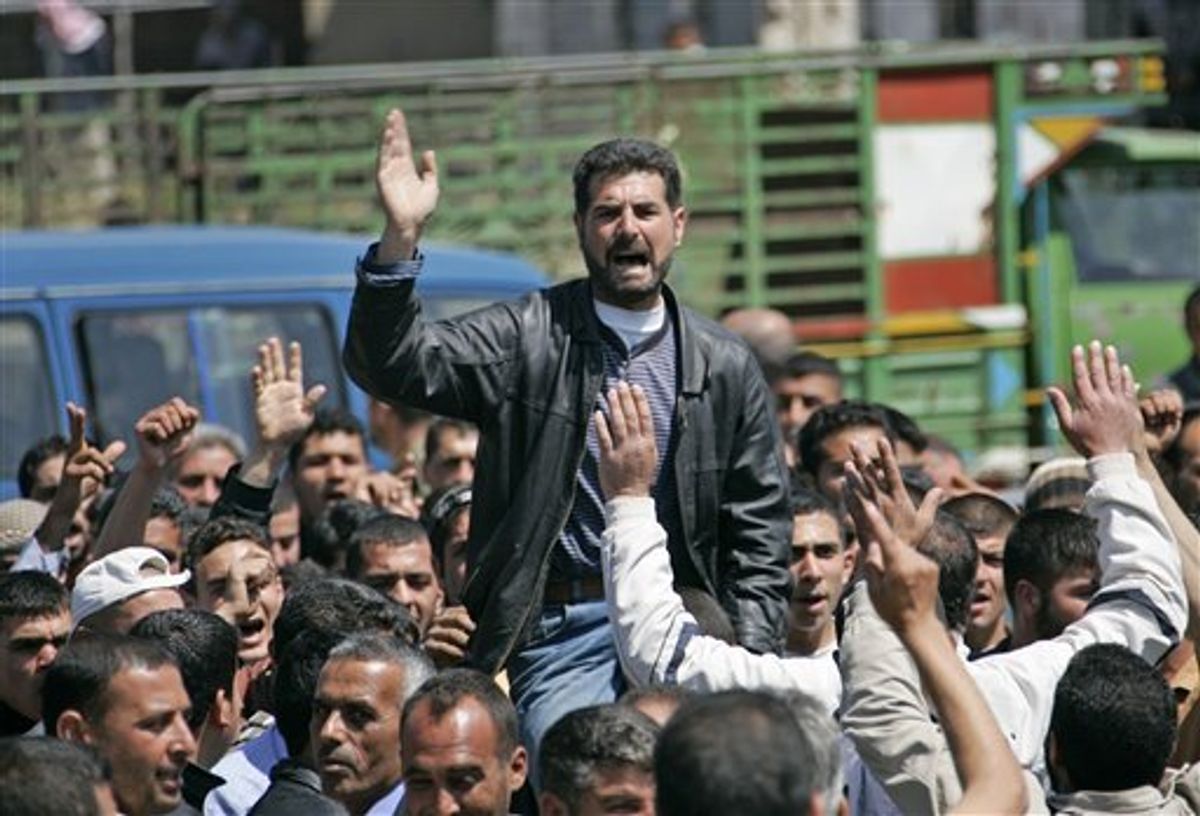 ** CORRECTS SPELLING OF LEBANESE ** Syrian citizens who fled from violence from the western Syrian villages along the Lebanese-Syrian border, protest as they shout slogans against Bashar Assad and his regime, in the Wadi Khaled area, about one kilometer (0.6 miles) from the Lebanon-Syria border, north Lebanon, on Monday May 16, 2011. Carrying mattresses and bags of clothing, Syrians fleeing their homeland described a "catastrophic" scene Monday in a besieged border town that has been largely sealed off as the army tries to crush a two-month uprising. (AP Photo) (AP)
--

The Syrian Security forces crackdown on protesters in different parts of the country left at least 44 people dead on Friday, making it one of the deadliest days since an uprising against President Bashar Assad's regime began two months ago, a rights group said Saturday.

Syria, meanwhile, blamed "armed groups" for the casualties and put the toll at 17.

The National Organization for Human Rights in Syria, whose leader Ammar Qurabi is currently in Turkey, said most of the deaths occurred in the northern province of Idlib and the central region of Homs.

On Friday, thousands of Syrians defied an unrelenting government crackdown and flooded the streets across the country to buttress their two-month uprising against the country's authoritarian regime. Authorities responded with live ammunition, causing the large number of casualties, right groups say.

The latest deaths bring to at least 900 the number of civilians killed since the uprising began, according to human rights group tallies.

SANA said Saturday that "armed groups who took advantage of peaceful gatherings" shot dead 17 civilians, policemen and members of the military on Friday in Idlib and Homs.

The government repeatedly has blamed the unrest on armed gangs -- not true reform-seekers.

Meanwhile in Lebanon, a security official said thousands of Syrian troops deployed on Lebanon's northern border preventing the flow of Syrian refugees into the country. The official said that after the army's deployment, Syrians can only cross through official border points rather than enter Lebanon illegally.

The official, who spoke on condition of anonymity in line with regulations, said some 10,000 Syrians have fled to Lebanon since the Syrian army began an operation in the western town of Talkalakh, near Lebanon's border, last week.

The turnout for Friday's demonstrations -- and the now-familiar, deadly response by the regime -- was the latest sign the conflict could be moving toward a dangerous stalemate with neither side able to tip the scales. Assad's forces have unleashed tanks and snipers and made thousands of arrests to break the revolt, but protesters continue to face down security forces.

Friday's death toll reported by the NOHR said 13 people were killed in Homs, 26 in Idlib, one in Latakia, two in the northeastern town of Deir el-Zour, one each in the central city of Hama and the Damascus suburb of Daraya.

Mustafa Osso, who heads the Kurdish Organization for the Defense of Human Rights and the General Liberties in Syria, said security forces detained 12 officials of the Christian Democratic Assyrian Organization in the northeastern town of Qamishli late Friday. The reason of the arrests was not known, he said.

Assad has shrugged off U.S. calls to step aside as well as a new round of sanctions targeting him and top aides, suggesting mounting international pressure will not force an end to a crackdown.

Friday's crushing security response came despite calls a day earlier from U.S. President Barack Obama that Assad should lead his country to democracy or "get out of the way." Syria's official news agency said Obama's admonition amounted to "incitement."

The revolt has posed the most serious challenge to the Assad family's 40-year ruling dynasty.

Bassem Mroue can be reached at http://twitter.com/bmroue.