After little debate, a bipartisan deal is set to extend some of the post-9/11 law's most controversial provisions 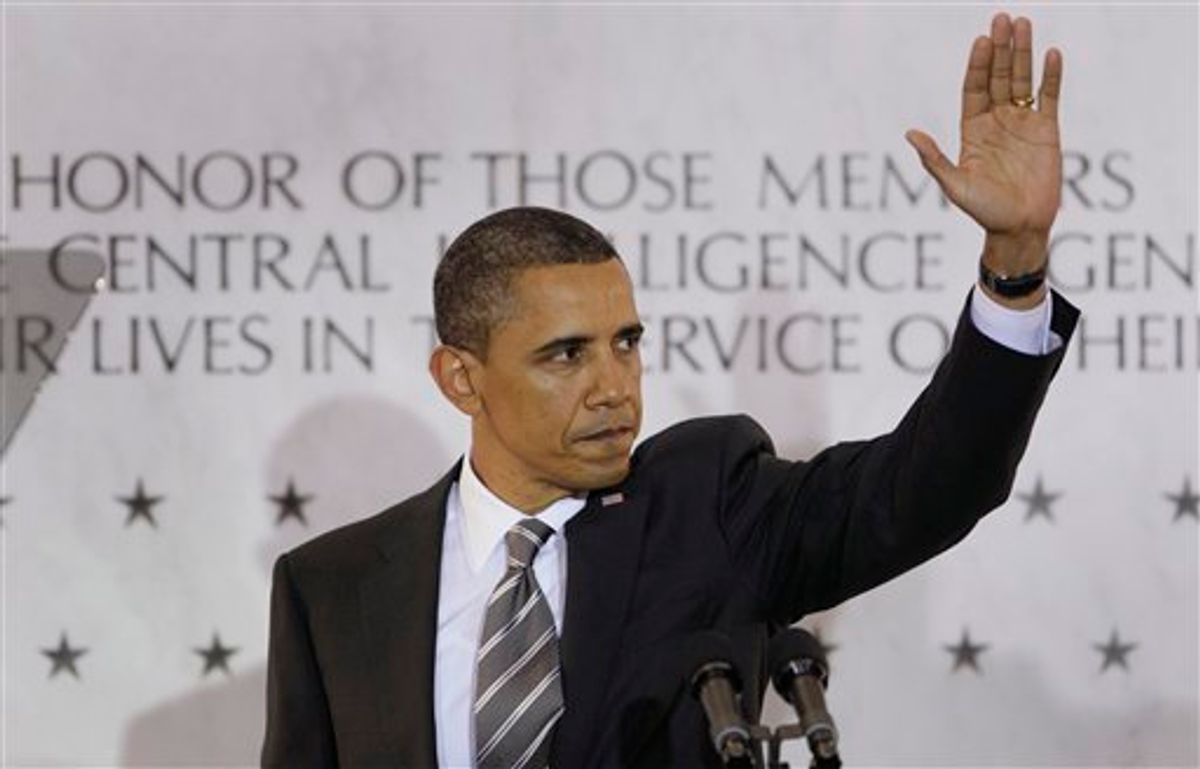 President Barack Obama waves to CIA employees after speaking at CIA headquarters in Langley, Va., Friday, May 20, 2011. Obama congratulated the country's intelligence workers for the years of effort that led to the discovery and killing of terrorist Osama bin Laden. (AP Photo/Carolyn Kaster) (AP)
--

On Thursday, Democratic and Republican congressional leaders agreed to a deal to extend key provisions of the Patriot Act for four years, a significant decision that generated little press attention or sustained political debate.

Certain sections of the Patriot Act, which originally passed Congress a month after the Sept. 11, 2001, attacks with near-unanimous support, have long been criticized by civil libertarians in both political parties.

But the Obama administration and its allies on Capitol Hill have been eager to renew about-to-expire provisions that expanded domestic intelligence collection and wiretapping powers. As the AP put it, "The idea [of the deal] is to pass the extension with as little debate as possible to avoid a protracted and familiar argument over the expanded power the law gives to the government." A vote is expected within several days.

To find out more about the provisions that are set to be extended, I spoke with Julian Sanchez, a research fellow at the Cato Institute who closely follows technology and civil liberties issues.

What is actually going to be extended for four years?

There are three expiring provisions. First, there's the "lone wolf" provision, which was actually part of a different law. That's a change to the definition of an agent of a foreign power under the Foreign Intelligence Surveillance Act (FISA). FISA is a special framework for gathering foreign intelligence in the United States, which is much broader than the electronic surveillance powers that apply to criminal investigations. It has traditionally always been limited to agents of foreign powers -- meaning someone who had a link to a foreign government or a foreign intelligence agency. The lone wolf provision allowed that framework to be applied to people who do not have a tie to any foreign group.

Then there's the roving wiretaps provision. This is for situations like on "The Wire" where the drug dealers would swap cell phones every few weeks to try to frustrate surveillance. In the criminal context, there's been this ability to get what are called roving wiretaps since the 1980s On the criminal side, the authorities are allowed to get these when there's evidence a target is trying to frustrate surveillance. So whenever the target is using a payphone or a different cell phone, that's all covered by the warrant. They don't have to go back to a judge to show probable cause all over again. On the FISA side, the Patriot Act added the ability to do roving wiretaps without the requirement that a target be identified by name.

The third is known as Section 215, the business records or "tangible things" provision. It allows investigators to get an order from the FISA court permitting them to compel the production of any tangible thing that is relevant to an investigation. It's pretty unlimited in scope. Any record or other thing that pertains to a suspected agent of a foreign power or someone in contact with them is under the law considered to be "presumptively relevant." That means the judge has no discretion to deny such requests. The records don't have to belong to anyone who is thought to be guilty of anything.

Why is the roving wiretaps provision potentially problematic?

The situation civil libertarians are worried about is what they dub the "John Doe warrant." The authorities can, in cases when the identity of a target isn't known, specifically describe the target instead. They can get a warrant that doesn't specify a facility, or a phone number or an account. It doesn't actually name the target. It might describe the target as a username on the Web.

Now, the Fourth Amendment has the requirement of particularity. A warrant has to specifically describe the place to be searched or the person to be seized. You have to very specifically say where you're going to search and what you're looking for. If the warrant says you're looking for a stolen car, you probably shouldn't be looking through my underwear drawer. But under the Patriot Act, too much discretion is ceded to the investigator. They might say, there's probable cause to think KSM9@yahoo should be under surveillance. But without even knowing who that person is, the investigator gets to decide what other accounts and online identities to wiretap without going back to the court and explaining why there's probable cause that these other accounts are terror-related. Given the volume of this stuff, not having that anchor of knowing who is behind the account opens up the possibility of over-collection. This probably involves a relatively small number of cases every year, but it has the troubling potential to sweep up too many innocent people's communications.

Obviously the Patriot Act is largely being used in secret. But have cases emerged that show how these expanded powers have been used in potentially troubling ways?

Part of the problem is that we don't know a whole lot about how any of these provisions have been used. Russ Feingold said back in 2009 during the previous reauthorization debate that he believed there had been abuses of Section 215 in connection with a sensitive collection program. We don't know what that collection program is. We don't know the nature of whatever Sen. Feingold regarded as an abuse. We know that he was on the intelligence committee and that he thinks there have been abuses, but that's as far is it goes.

It now looks like these provisions will be reauthorized without changes. But what reforms did critics of the Patriot Act want to see?

What a lot of civil libertarians wanted to see was a real soup-to-nuts overhaul. It would have tightened up Section 215 -- making it only apply to people with a nontenuous connection to someone who is an agent of a foreign power. Most people would have preferred to let the lone wolf provision expire entirely. And they wanted that John Doe loophole closed in the roving wiretaps provision.

Is it fair to say the Obama administration has been anti-reform on this? Is that pretty clearly their position?

If you go back to the 2009-2010 reauthorization debate, the formal position was, we want this to pass, but we're open to modification or amendments. But throughout the whole thing the Justice Department repeatedly refused to come out officially for or against particular reforms. What actually happened is that amendments stripping away civil liberties reforms were written by the Justice Department and laundered through Republicans. So the administration has been officially quiet and ambivalent, but it's clear that their real position is to undermine any serious attempt at reform. At the hearings, the administration has said there's no problem with these provisions, they're all fine.