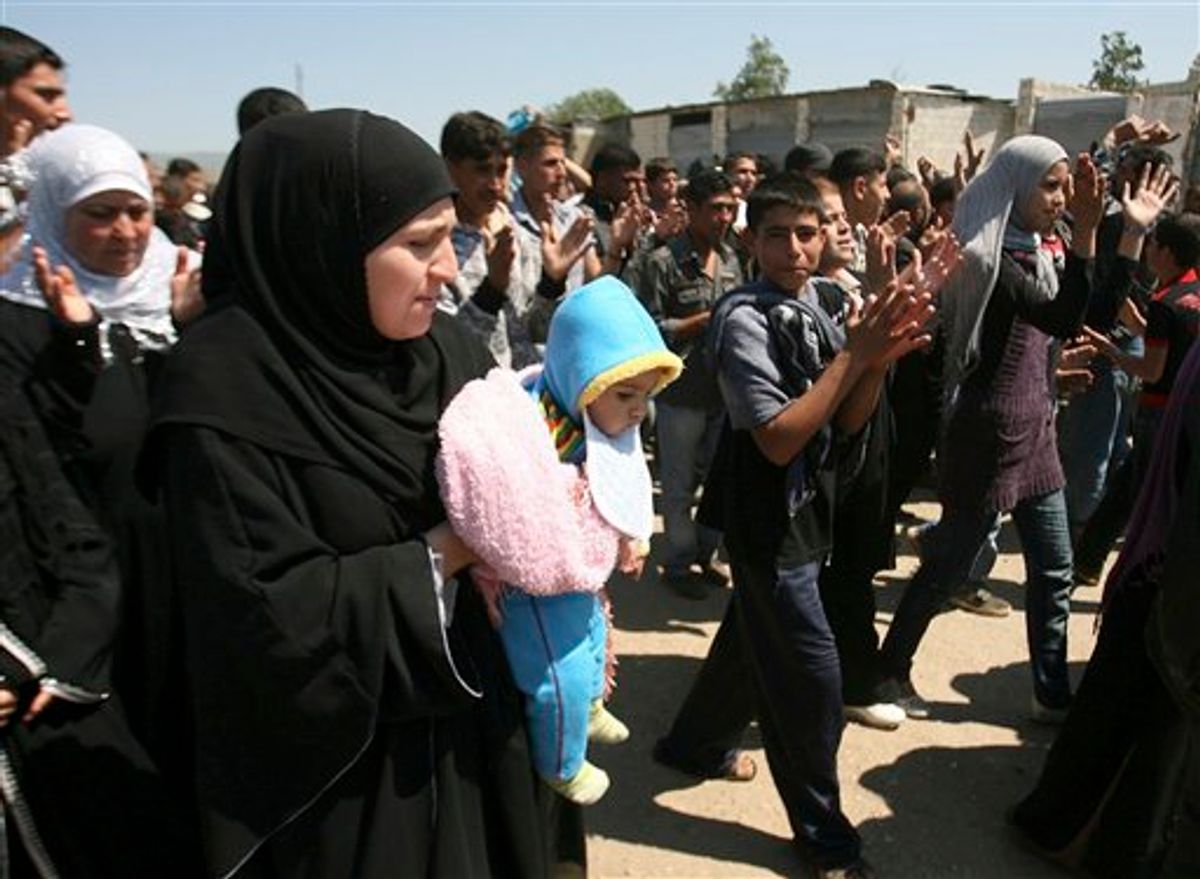 Syrian citizens who fled from violence from the western Syrian villages along the Lebanese-Syrian border, protest as they shout slogans against Bashar Assad and his regime, in the Wadi Khaled area, about one kilometer (0.6 miles) from the Lebanon-Syria border, north Lebanon, on Monday May 16, 2011. Carrying mattresses and bags of clothing, Syrians fleeing their homeland described a "catastrophic" scene Monday in a besieged border town that has been largely sealed off as the army tries to crush a two-month uprising. (AP Photo) (AP)
--

Syrian security forces opened fire on a funeral procession for slain anti-government protesters Saturday, pushing the number of people reported killed in a two-month uprising to more than 900 and making it one of the deadliest of the Arab Spring.

The latest bloodshed suggests that crackdowns by President Bashar Assad's regime show no signs of easing despite international sanctions and condemnations from the U.S. and its allies.

Excluding Libya -- where battles between Moammar Gadhafi's forces and his opponents have left possibly thousands dead since February -- Syria's death toll is now higher than any country that has been gripped by uprisings.

During Egypt's 18-day revolt that toppled long-serving President Hosni Mubarak on Feb. 11, at least 846 Egyptians died. In Tunisia -- which sparked the region's upheavals -- an estimated 219 people were killed before President Zine El Abidine Ben Ali stepped down in January.

A crackdown by authorities in Yemen, has left more than 150 protesters dead, opposition groups say. The number killed in Bahrain, Oman and other places shaken by unrest is far lower.

Syria's bloodshed also stands out because of its relative small population: about 22 million people compared with 80 million in Egypt. Tunisia has about 10.5 million people.

The Syrian toll is based on tallies by rights activists and other sources opposing Assad's government. Syrian officials have often reported deaths of security forces and others -- blaming them on armed thugs -- but have not given an overall figure. Syria has banned most foreign journalists so death counts cannot be independently verified.

Gadhafi, too, has placed strict limits on media in government-held territory, making independent casualty checks impossible. Rebels have claims thousands have been killed since protests began in February.

Most of Syria's deaths have occurred on Fridays when tens of thousands of people march to the streets from mosques following traditional noon prayers. The National Organization for Human Rights in Syria raised the latest Friday death toll to 44, making it one of the deadliest days since the uprising against Assad's regime began in mid-March.

Assad has also shrugged off U.S. calls to step aside as well as a new rounds of sanctions targeting him and top aides. On Thursday, U.S. President Barack Obama said Assad should lead his country to democracy or "get out of the way." Syria's official news agency said Obama's admonition amounted to "incitement."

"International pressure is still weak," said Hilal Khashan, a political science professor at the American University of Beirut. "Despite Obama's speech, the regime knows that staying in power is more important and in order to stay in power the regime is ready to do anything."

On Saturday, tens of thousands of people took part in the funeral for eight of those killed a day earlier in the central city of Homs, local activists said. The funeral procession came under fire as the people marched from a cemetery, leaving at least three dead and dozens wounded, they said.

The government repeatedly has blamed the unrest on armed gangs rather than anti-government protesters.

In an unexpected development, activists said the Interior Ministry gave permission for a candlelight vigil in a Damascus public garden Monday for those who died since the uprising began. The opposition Syrian Mobilization Committees urged for a major turnout, vowing that the sit-in would continue "until the downfall of the regime."

The Interior Ministry did not immediately confirm the report, but the private Sham FM radio station also said the activists were given a license to hold a vigil for two hours.

The activists spoke on condition of anonymity for fear of government reprisal.

In Lebanon, a security official said thousands of Syrian troops have massed to prevent the flow of Syrian refugees into the country. The official said Syrian authorities are trying to choke off illegal routes into Lebanon and force people through official border points.

The official, who declined to be identified in line with regulations, said some 10,000 Syrians have fled to Lebanon in the past week to escape violence.