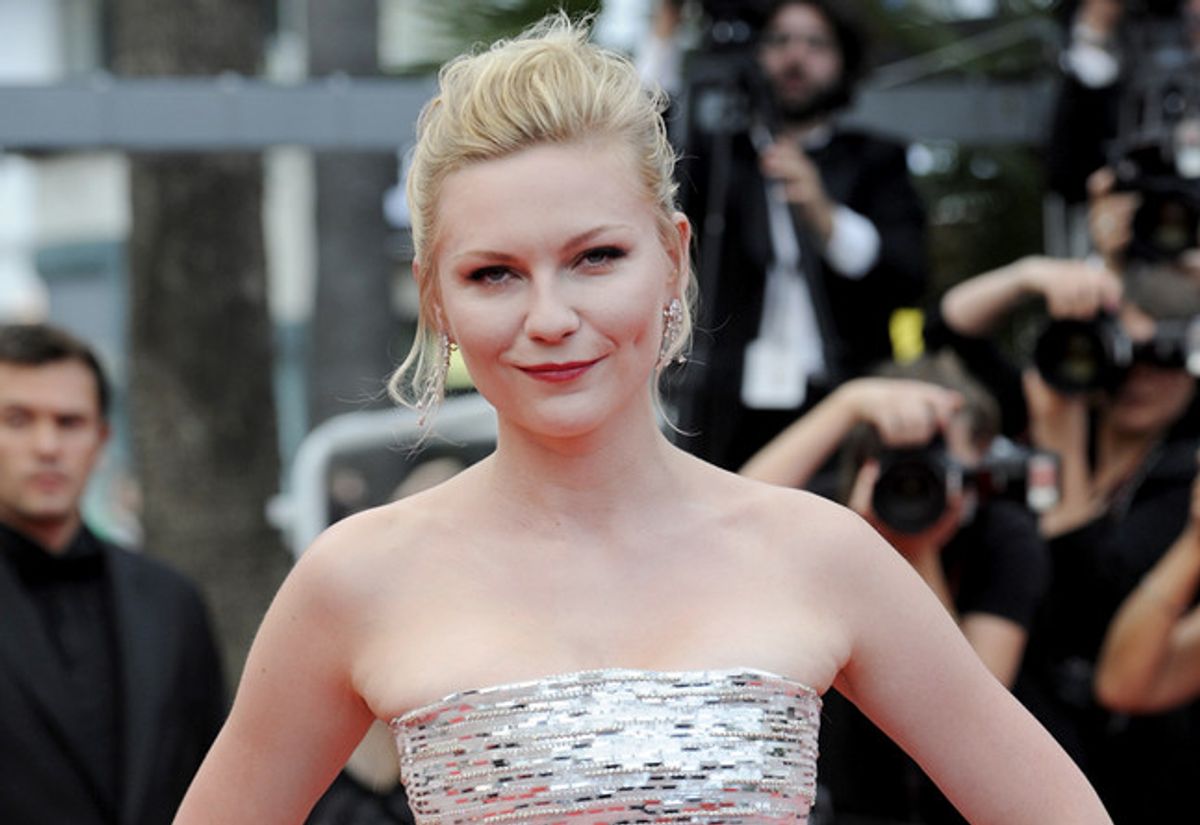 Kirsten Dunst, winner of the best actress award at the Cannes Film Festival for her performance in "Melancholia."
--

CANNES, France -- In a strong and wide-ranging year for world cinema at its biggest annual trade show, the Cannes Film Festival concluded with a major American triumph. Terrence Malick's "The Tree of Life," a long-gestating epic starring Brad Pitt as a 1950s Texas dad, which sought to summarize its auteur's view of not just movies but human life and the universe, won the Palme d'Or. It's the first American movie to capture the film world's biggest non-Oscar prize since Michael Moore's "Fahrenheit 9/11" in 2004.

At least Moore's film was a hit; the last American narrative feature to win the Palme was Gus Van Sant's "Elephant" a year earlier, a minimal and dark Columbine-inspired drama that found very little audience in the United States. Fox Searchlight will release Malick's film in American theaters this week, and couldn't have asked for a bigger or better publicity push. "Tree of Life" will presumably now be discussed as a factor in the Academy Awards race, but no film has won both the Palme d'Or and the best-picture Oscar since Delbert Mann's "Marty" in 1955.

Malick has apparently left Cannes, but even when he was in town he declined to address the press or appear on the red carpet. Journalists here have grumbled all week about the precedent this sets, since filmmakers attending the festival are customarily expected to put in a certain amount of face time with both the press and the public. There's a sense in which this long, long awaited project -- originally scheduled to premiere here last year -- is a special case on many levels. At any rate, I don't think Malick or his production partners are terribly concerned about that tonight.

"Tree of Life" producers Bill Pohlad and Dede Gardner accepted the Palme d'Or in Malick's stead, and Pohlad addressed the subject of the director's absence at the ensuing press conference. "I'm not saying it's an easy question to answer," he said. "But Terry personally is a very humble guy and a very sincere guy. He wants the work to speak for himself and stay in his private life, and not have it be about the ego of it or the celebrity of it." Gardner added that Malick's only words to the press were to express his gratitude to his wife and his parents.

It was left to the Palme d'Or jury's normally taciturn president, Robert De Niro, to expand a bit on the group decision. He did so ambiguously, not even trying to pretend that the final verdict was unanimous. Clearly there was some backstage disagreement, but exactly what its substance was we can only speculate. "Most of us felt very clearly that it was the movie," De Niro said. "It had the size, the importance, the intention -- whatever you want to call it. It seemed to fit the prize. Of course there are other movies that are very good, and it was a very difficult decision. At the end of the day you need to make certain compromises. Most of us thought it was a terrific film."

Speaking broadly, critics' opinions here seemed divided between "The Tree of Life," Lars von Trier's "Melancholia," Nicolas Winding Refn's "Drive" and Michel Hazanavicius' "The Artist" -- and none of those films went home empty-handed. Kirsten Dunst won the jury's best-actress award for her role in the apocalyptic family drama "Melancholia," and on stage she made an indirect reference to the trouble her director got in for his bizarre comments about Hitler and the Nazis.

"What a week it's been!" Dunst exclaimed, before thanking von Trier "for giving me an opportunity to be so brave in this film." Mention of the exiled director's name brought brief applause, perhaps a sign that his festival ban has already provoked the European instinct to root for the underdog. Dunst, however, declined to appear at the post-awards press conference, no doubt eager to put the whole thing behind her.

One reporter at the press conference asked French filmmaker Olivier Assayas, a jury member known to admire von Trier's work, how much the group had discussed "Melancholia" and the worldwide media furor surrounding the Danish director. "As far as I'm concerned, it's one of his best films," Assayas responded. "I think it's a great film. I think we all join in condemning the press conference of Lars von Trier, but if you ask me about the film I think it's beautifully acted and it's a great work of art."

Refn, who at first seemed to be the other Danish director at this festival, took home the best-director prize for his exciting heist film with Ryan Gosling, "Drive" -- and richly deserved it. Big international box office is expected for this Euro-American art-action hybrid, and Refn and Gosling told the press conference that they've already begun kicking around possibilities for a sequel. Arguably the young Dane was a little too impeccably cool on stage in the Lumière, pretending to tweet on his iPhone -- or really doing it -- and thanking the jury for its "good taste."

Jean Dujardin, the bluff and handsome French comedian who anchors Hazanavicius' joyous neo-silent "The Artist," playing a 1920s Hollywood star in the Douglas Fairbanks mode, captured the best-actor award. He's a hilarious charmer who has called himself "the poor man's Sean Connery," and at this point only his limited English is holding him back from massive international stardom.

The festival's second-place award, the Grand Prix, was split between two highly deserving films with limited commercial prospects, Jean-Pierre and Luc Dardenne's "The Kid With a Bike" and Turkish director Nuri Bilge Ceylan's "Once Upon a Time in Anatolia." The Dardenne brothers have never brought a film to Cannes without winning an award, and have captured the Palme d'Or twice (for "Rosetta" and "The Child"). So this isn't a huge surprise, but "The Kid With a Bike" is a terrific, intimate film about a ferocious, fatherless teenage boy and his accidental relationship with the stranger who takes him in.

As for "Once Upon a Time in Anatolia," it's a slow and demanding film that was poorly served by being screened at the tail end of the Cannes competition, and was judged unfairly by many in the press. It might almost be described as an episode of "CSI" written by Chekhov and filmed on the desolate steppes of rural central Turkey, which takes two and a half hours to reach its ambiguous destination. It's just as good, and just as challenging, as that sounds, and it's gratifying to see that the jury had the patience for it. I can only hope some American distributor with modest means and modest aims will follow suit.

The third-place Prix du Jury went to "Polisse," a Parisian ensemble cop drama by one-named French actress and director Maïwenn, which I did not see (but should eventually get niche-market American release). Best screenplay was awarded to Israeli director Joseph Cedar's ingenious academic-world tragicomedy "Footnote," which feels more and more like a sneaky international hit waiting to happen.

Two longtime Cannes bridesmaids and European art-house favorites, Pedro Almodóvar and Aki Kaurismäki, were spurned once again. In the case of Kaurismäki's winsome and delightful French immigration fable, "Le Havre," that's something of a surprise. Almodóvar tried to blend elements of science fiction and thriller with the gender-studies melodrama in his dark Frankenstein parable, "The Skin I Live In," and I guess the jury shared the view that the results are mixed. Lynne Ramsay's explosive "We Need to Talk About Kevin," also shut out, will be a much-debated film later this year, and Tilda Swinton's amazing performance certainly could have won an acting award. But Kirsten Dunst may have benefited from the jury's apparent desire to reward "Melancholia" without directly mentioning Lars von Trier.

With that, another year closes at Cannes -- but this was no ordinary year, and no ordinary Cannes. It says something about the breadth and quality of the 2011 lineup that those three films, each a rich, strange and distinctive viewing experience, had almost become afterthoughts by festival's end. Cannes becomes exhausting long before it's over, and I'm grateful to be going home, along with all the other journalists, executives, publicity flacks, filmmakers and dealmakers, so this overgrown beach village can settle into its summer stupor. But amid all the customary dumb hype and decadent glamour -- not to mention the Cirque von Trier -- the film industry threw itself an extraordinary 10-day party to celebrate a remarkable artistic resurgence.