Taliban denies leader has been killed in Pakistan 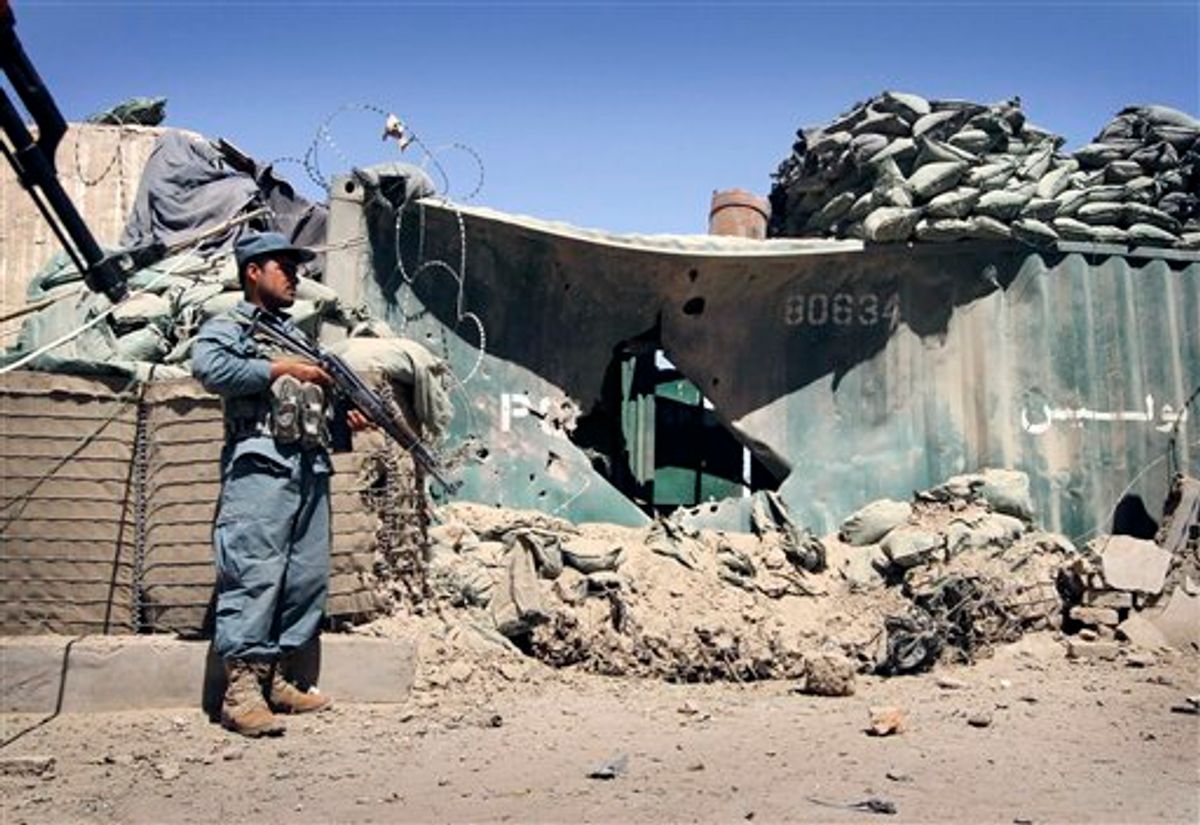 An Afghan policeman stands guard at the scene of an explosion in Kandahar south of Kabul, Afghanistan on Sunday, May 22, 2011. In Kandahar, two police officers suffered injuries Sunday when a motorcycle laden with explosives detonated as they tried to disarm it, the ministry said. (AP Photo/Allauddin Khan) (AP)
--

The Taliban denied a report in the Afghan press that the insurgent group's leader had been killed in neighboring Pakistan, saying Monday that Mullah Mohammad Omar is alive and in Afghanistan.

"This is absolutely wrong. It's only propaganda and we completely deny these rumors," Taliban spokesman Zabiullah Mujahid told The Associated Press in a phone call. "He is inside Afghanistan and he is busy directing military operations with his commanders."

There has been much speculation that the U.S. might ramp up efforts to kill or capture the reclusive, one-eyed Taliban leader after the successful strike against Osama bin Laden. President Barack Obama has said he would order another covert military raid if it was necessary to stop terrorist attacks.

Attacks have increased in Afghanistan since bin Laden's death and since the start of the Taliban's yearly spring offensive. On Monday, four NATO service members were killed in an explosion in the east, NATO said in a statement. The military alliance did not provide details on the attack or the nationalities of the dead.

Most of those with knowledge of the Taliban organization say Omar is hiding in southern Pakistan, around Quetta or Karachi.

Afghan news channel Tolo quoted an anonymous Afghan intelligence official as saying Omar had been shot dead in Pakistan while being moved from Quetta to North Waziristan with the help of former Pakistani intelligence chief Gen. Hamid Gul.

North Waziristan is a tribal area home to militants whose primary focus is attacking U.S. and NATO troops across the border in Afghanistan.

A Pakistani intelligence official said that there was no information to suggest the report of Omar's death was true. He spoke anonymously because of the sensitivity of the subject. U.S. and NATO officials said they had heard the report from Tolo but had no information to confirm or deny it.

Gul told the AP that the story was false.

"This is propaganda, sheer deception, disinformation," Gul said. "I have never met him. I've never seen him. No contact whatsoever."

Afghanistan's leaders accuse Pakistan's intelligence services of aiding Taliban and other insurgents fighting international and Afghan troops in the country, even as Islamabad battles the allied Pakistani Taliban at home.

Similar suspicions of collusion were raised after the raid on bin Laden, whose hiding place in a military town near the Pakistani capital led some to believe at least some Pakistani authorities must have known where he was. Pakistan denies that.

Latifullah Mashal, a spokesman for the Afghan intelligence agency, said Omar and some Taliban commanders had disappeared four or five days ago while moving from Quetta to North Waziristan. Mashal suggested that "maybe an incident has happened along the way," but emphasized that officials had no further information about the fate of the Taliban leader.

"We can confirm he's been disappeared from his hide-out," Mashal told reporters in Kabul.

Mashal said that Afghan's intelligence agency had shared information about Omar's whereabouts "more than 30 times" with neighboring countries, especially Pakistan. He said he didn't know how that information had been used during Omar's more than a decade in hiding.

"Most of the allies are honest, some are not," the spokesman said.

Pakistan's foreign minister, meanwhile, arrived in Kabul to meet with Afghan President Hamid Karzai. His discussions with Afghan and U.S. officials were expected to focus on how the three countries could work together to fight terrorism, improve economic ties and forge peace in Afghanistan.

Obama told the BBC in an interview broadcast Sunday that he could not allow "active plans to come to fruition without us taking some action," and would send troops again if a senior Taliban leader were found in Pakistan.

But there are also parallel efforts to get the Taliban leadership into negotiations with the Afghan government, making it unclear if such a strike would be in the interest of the American or Afghan governments.

The Taliban have stepped up attacks as part of their yearly offensive against NATO, Afghan government installations and officials. Insurgents also have promised revenge attacks after the killing of bin Laden.

The Taliban claimed they were behind an attack Saturday on the main military hospital in Kabul that killed at least six Afghan medical students.

Associated Press writers Jon Gambrell in Kabul and Nahal Toosi in Islamabad contributed to this report.