The Pentagon's attempt to greenwash the military

The army's clean energy measures ignore the real problem: Our permanent wars are wrecking the environment 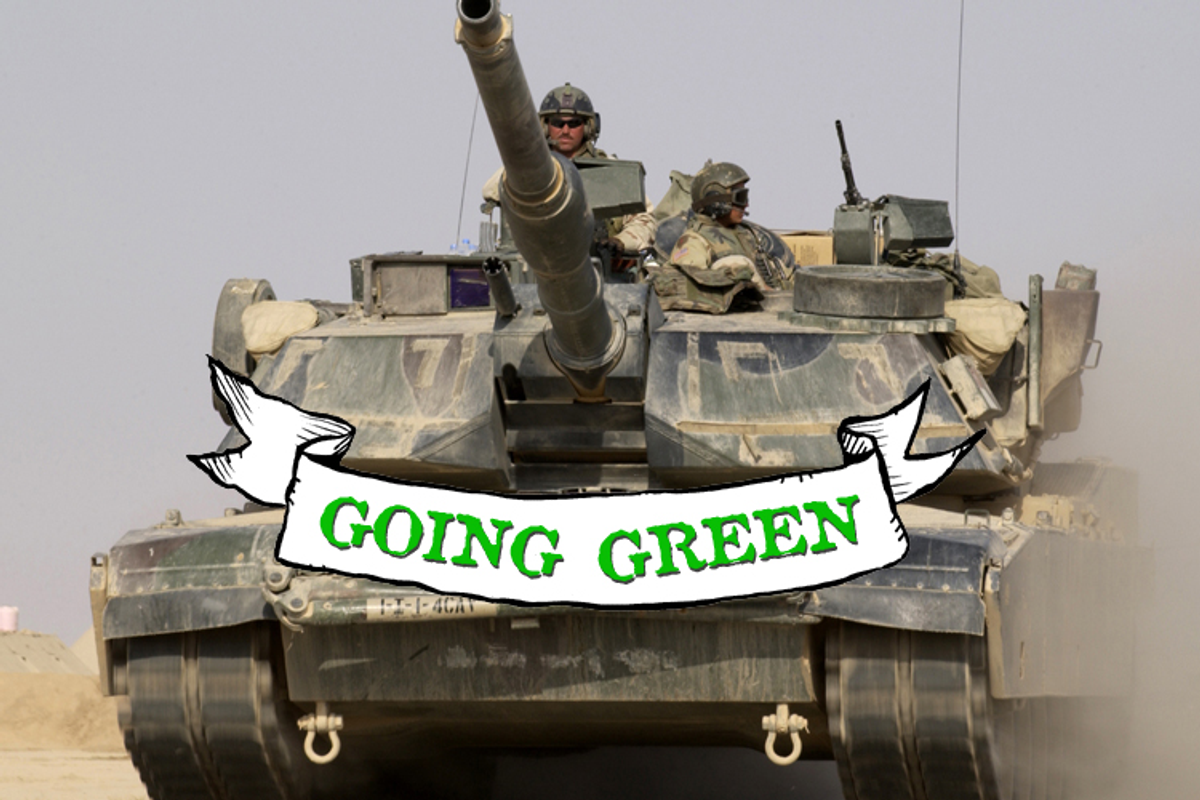 Back in 2003, soon-to-be Gov. Arnold Schwarzenegger faced the age-old political label of "hypocrite" for his stance on the environment. While Schwarzenegger presented himself as a green-ish moderate who would press his Republican Party to acknowledge problems like global climate change and pollution, enviros noted that he proudly drove around a fleet of seven gas-guzzling Hummers. His response? Instead of trading in the gas guzzlers for hybrids or even just standard sedans, he promised to retrofit one of his Hummers to run on hydrogen.

The defiant move exemplified that mix of stubborn hubris that has come to define our society. Rather than modify behavior or tastes, we often do what Arnold did: we come up with ultra-expensive, impractical but seemingly bold ways to pretend we don't have to ever change. Because hey, that's America -- fuck yeah.

Eight years after Schwarzenegger's Hummer spectacle, this very same ethos is now being publicly championed yet again -- only this time, on the Pentagon's much bigger stage.

Yes, military brass led by U.S. Navy Secretary Ray Mabus have lately been mounting a PR campaign to convince America that the gas-guzzling armed forces are now helping solve burgeoning environmental crises by "going green." Officials are specifically touting their success reducing energy and water consumption at bases, and they are promoting an initiative to make sure "half of all energy that the navy and marines use afloat, ashore and in the air will come from non-fossil fuel sources." For this effort, they have been landing periodic -- and fawning -- coverage in the New York Times, USA Today and National Public Radio, among others.

Coming from a Pentagon that is the largest single consumer of energy in America, these modest steps are long overdue and commendable. But absent deeper behavioral change, these initiatives are laudable only in the sense that it's laudable, say, for a wealthy Hollywood star to retrofit one of his seven Hummers or for a growing coal company to donate a drop of its profits to a tree-planting charity.

In other words, it's good in a very limited way, because sans behavioral change, it's still fundamentally an act of greenwashing. In this case, it's a greenwashing that tries to hide the fact that maintaining an empire at the barrel of a gun requires an enormous amount of energy, and will continue requiring an enormous amount of energy -- much of it not so clean -- no matter how many "Military Going Green" stories the Pentagon's spinmeisters land in the media.

To know this is to behold just two data points from the major military occupations of the last decade. In Iraq, the Atlantic Monthly reported in 2005 that the military uses "about 1.7 million gallons of fuel a day" which translates into "each of the 150,000 soldiers on the ground consumes roughly nine gallons of fuel a day." Similarly, in Afghanistan, energy analyst Sohbet Karbuz crunched numbers from the Defense Logistics Agency to find that by 2006, Operation Enduring Freedom had already consumed "more than 2.2 billion gallons of fuel."

While some of that oil would have still been consumed by the military without the Iraq or Afghanistan wars, a lot of it would have been saved. That means if the military was as serious as it claims to be about protecting the environment and using less energy, it would be initiating a much different conversation right now. It would probably be spending a lot less time promoting pie-in-the-sky plans to Prius-ize some of its tanks (a la Schwarzenegger hydrogen-izing his Hummer) and a lot more time talking about how to end what it's own leaders call an "era of persistent conflict". Because, as the numbers imply, the fastest, most immediate and most efficient way for the Pentagon to mitigate the environmental crises that come from energy consumption is to simply move America away from its energy-draining policy of permanent war.

This revelation -- and the fact that few military leaders are talking about it -- shows why this really is greenwashing in the purest sense of that marketing term.

The Pentagon is not really about going green to protect the planet or even to prevent against the national security threats that military leaders say global climate change create. It's mostly about the Pentagon channeling Schwarzenegger in selling the idea that it can continue its same old behavior and posture. Indeed, the military's message is designed to have us believe that the Pentagon can somehow continue the energy-expensive environmentally destructive policy of permanent war while conserving energy. It's as fantastical a notion as an oil company saying it aims to help reduce carbon emissions by producing more oil, but the propaganda has a goal: making war that much more acceptable to a frugal public.

This is not a secret if you pay close attention to what military leaders quietly admit about their environmental initiatives. As just one example, Navy Secretary Mabus last week acknowledged to New Scientist magazine last week that the military is primarily "doing this to be better war fighters" -- that is, to be able to wage more, not less, war.

Not surprisingly, Mabus never publicly ponders the fact that protecting the environment, conserving energy and fighting wars are often mutually exclusive missions -- and he doesn't ponder it for a reason. Sitting atop the Pentagon, he is part of a military leadership preemptively fortifying its case for permanent war against all future arguments -- including those posed by an inherently finite environment.