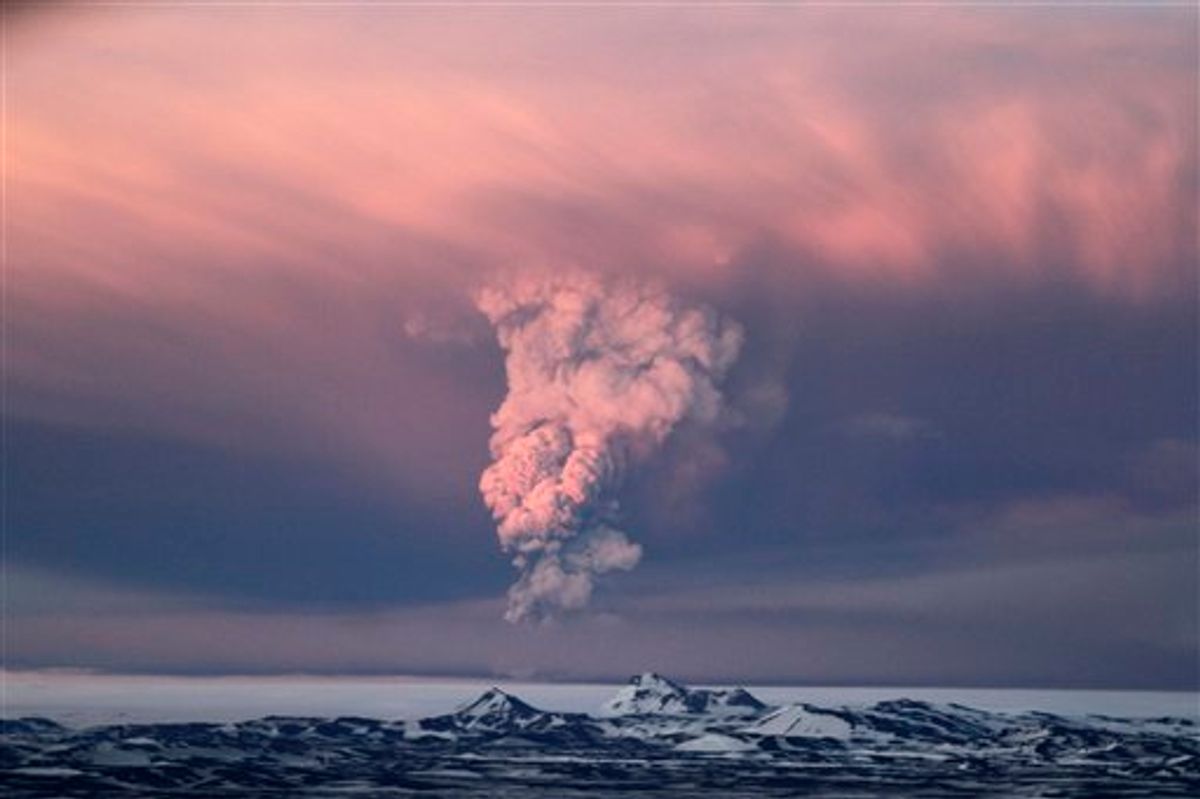 In this photo taken on Saturday, May 21, 2011, smoke plumes from the Grimsvotn volcano, which lies under the Vatnajokull glacier, about 120 miles, (200 kilometers) east of the capital, Rejkjavik, which began erupting Saturday for the first time since 2004. Iceland closed its main international airport and canceled domestic flights Sunday as a powerful volcanic eruption sent a plume of ash, smoke and steam 12 miles (20 kilometers) into the air. (AP Photo/Jon Gustafsson) ICELAND OUT (AP)
--

A plume of dense ash from an Icelandic volcano was bearing down on Scotland and set to disrupt flights there as early as Monday night, Britain's Met Office said.

Spokesman David Britton said an ash cloud classified as high-density was expected to cover parts of Scotland by 6 a.m. local time (midnight EDT) Tuesday. It was not immediately clear how many flights would be disrupted.

The April 2010 eruption of another Icelandic volcano prompted aviation officials to close Europe's airspace for five days out of fear that the ash could harm jet engines. Thousands of flights were grounded, airlines lost millions of dollars and millions of travelers were stranded, many sleeping on airport floors across northern Europe.

On Monday, the coasts of Scotland and Ireland were set to be hit by the smaller of two plumes from the Grimsvotn volcano. The main cloud of ash was causing minor disruptions around Scandinavia.

Britain's Civil Aviation Authority said that aircraft cannot fly through high-density ash clouds, though they may be able to fly through lower-density clouds.

Officials said the ash plume was unlikely to affect President Barack Obama, who arrived in Ireland on Monday. Most flight paths in and out of Ireland run far south of the ash cloud's projected path.

In addition to flights directly affected by heavy ash, some long-distance flights could be delayed if airlines have to divert their routes away from Iceland, U.K. Transport Secretary Phillip Hammond said.

An Icelandic meteorological official said the eruption already appeared to be getting smaller, but Thierry Mariani, France's transport minister, said it was too early to tell whether air travel over Europe would be affected by the eruption.

Mariani told Europe 1 radio that the composition of the cloud will be examined in the coming days and if the ash is found to be harmful to airplanes, countries may take a joint decision to close part of Europe's airspace.

"The priority must always remain to ensure security," he said.

Iceland shut its main airport after Grimsvotn, about 120 miles (200 kilometers) east of Reykjavik, erupted Saturday. The airport remained closed Monday morning, but officials hoped to reopen it later in the day.

Danish air traffic officials said the main ash plume had reached eastern Greenland and Air Greenland said its Monday flight between the island's main airport and Copenhagen was canceled as a result.

Aviation officials in Norway said the cloud might also affect flights to and from the Arctic islands of Svalbard on Monday.

Hammond told the BBC that Britain had equipment in Iceland analyzing the ash as it comes out of the volcano, and equipment in the UK that analyses the density of the ash.

He said that this year airlines are able to seek permission to fly through low and medium densities of ash if their aircraft are designed to do so.

"We won't see a blanket closing of airspace," he said.

The European air traffic control agency's models showed the main plume of ash gradually extending northward from Iceland over the next two days. The cloud was predicted to arch its way north of Scandinavia and possibly touch the islands off the northern Russian coastline within the next two days.

Eurocontrol said the smaller ash plume was not expected to move further east than the western coast of Scotland.

Some airline chiefs complained that regulators had overreacted by shutting much of Europe's airspace last year. But a study last month in the Proceedings of the National Academy of Sciences concluded the shutdown had been justified. It said the hard, sharp particles of volcanic ash blasted high into the air could have caused jet engines to fail and sandblasted airplane windows.

Jan M. Olsen in Copenhagen, Denmark and Slobodan Lekic, Gabriele Steinhauser and Raf Casert in Brussels contributed to this report.