A month after Kobe Bryant gets fined for using an offensive word, Joakim Noah hurls it at a fan. What's going on? 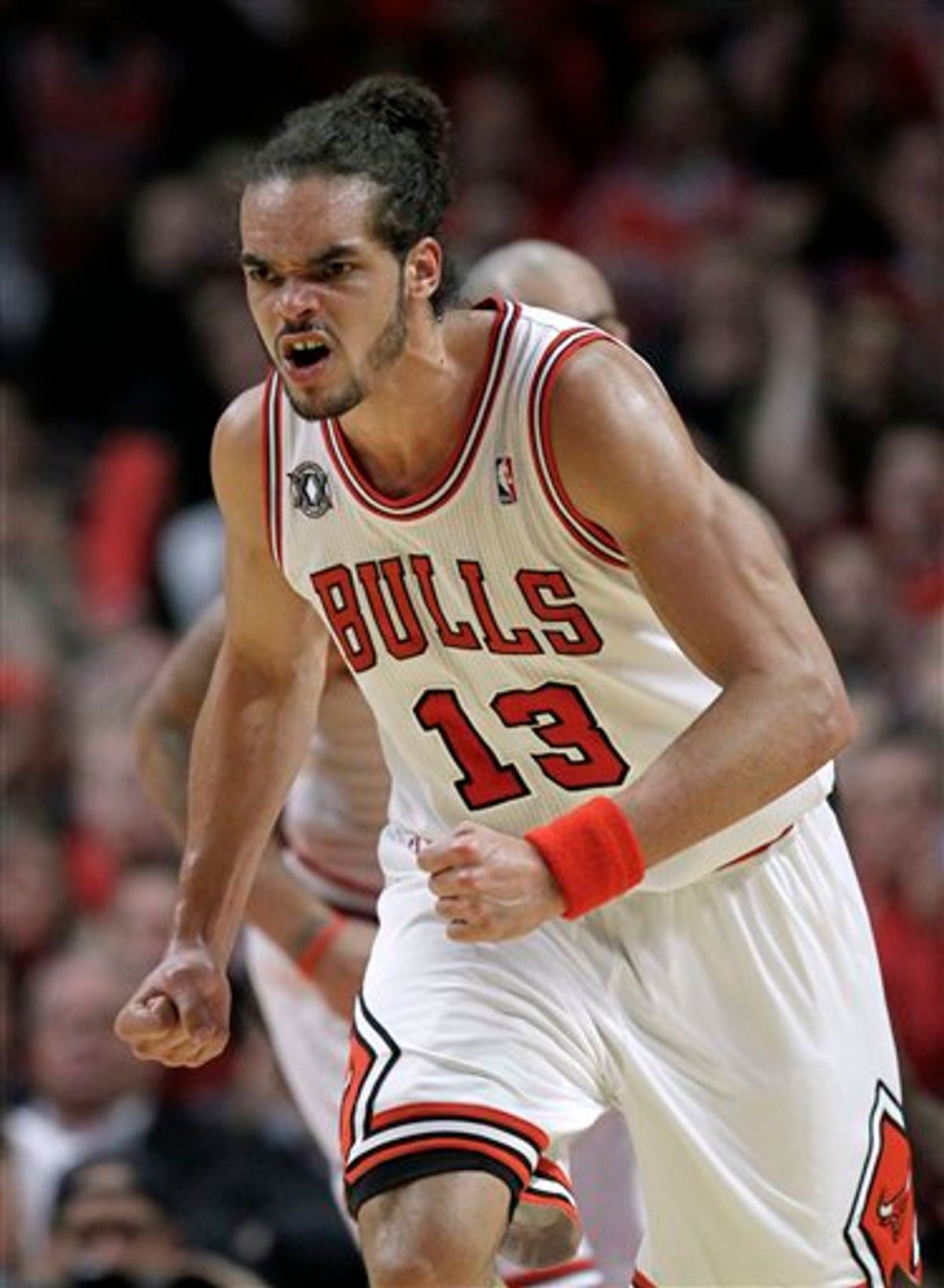 Chicago Bulls' Joakim Noah reacts after scoring a basket during the second quarter in Game 2 of a first-round NBA playoff basketball series against the Indiana Pacers, in Chicago on Monday, April 18, 2011. (AP Photo/Nam Y. Huh) (AP)
--

You'd think Chicago Bulls center Joakim Noah would have known better. During Sunday's tense Eastern Conference finals, he was caught on camera shouting a "Fuck you, faggot" from the bench to a fan in the stands -- a slur remarkably similar to the "fucking faggot"  that cost Kobe Bryant a cool $100,000 last month.

After the game, Noah issued a statement that "A fan said something, and I said something back. I apologized ... I got caught up. I didn't mean any disrespect to anybody." Noah didn't elaborate on what he said or his personal feelings on the "something" phrase in question, and he admitted, "I don’t know what’s going to happen," regarding the possible consequences he may face for his outburst.

Noah surely knows the potential cost to his bank account as well as his reputation. When Kobe Bryant hurled the alliterative insult at a referee after earning a technical foul during an April game, NBA Commissioner David Stern promptly called his remark "offensive and inexcusable." But he didn't stop there. He added, "While I’m fully aware that basketball is an emotional game, such a distasteful term should never be tolerated. Accordingly, I have fined Kobe $100,000. Kobe and everyone associated with the NBA know that insensitive or derogatory comments are not acceptable and have no place in our game or society."

Is it excessive that a few short words, spewed in the heat of a game, could cost an NBA player considerably more than most of us will make this year? What's the price tag on a word, and how is that measured? And had Bryant or Noah used a different slur -- take your pick from any of the racial, religious or sexual epithets that spring to mind -- would the repercussions have been the same?

Language, and the way we use it, is rarely an all occasion thing. "That's so gay" can sound like a joke to a movie writer's ear and a crass insult to an audience's. "Retarded" can be meant as a flippant response to a tired question and received as a hurtful reminder of a cruel taunt. And let's not even get started again on the endless debate over why some words are so durable within certain groups and in certain contexts, but remain utterly verboten in others. (A good rule of thumb does, however, remain: If it's a hot-button word and your name is Mel Gibson, just don't.)

What makes Bryant and Noah's use of "faggot" depressing is that the incidents serve once again to show the mindless machismo and homophobia so prevalent on and off the court. You play like a girl.  You're a fag. It's so protective of the speaker's masculinity, such a clear put-down of the victim's alleged lack thereof.

Put-downs are a regular part of the heat of competition, whether you're a fan in the stands or a player in the game. But the choice of words has resonance long after the game has ended. Bryant's quasi apology in April didn't acknowledge that. Instead he said, "What I said last night should not be taken literally. My actions were out of frustration during the heat of the game, period. The words expressed do NOT reflect my feelings towards the gay and lesbian communities and were NOT meant to offend anyone." It was echoed, though not as strongly, in Noah's "I didn't mean any disrespect to anybody." In other words, I'm sorry you feel that way, gay and lesbian communities. There's no empathy, no suggestion that maybe while that ref or that fan may indeed have been a total tool, the vocabulary missile lobbed at them hit the wrong target.

In a country that put freedom of speech in its original playbook, fining people for using hurtful words doesn't seem so much like an incentive to change their minds as it is simply to watch their mouths. Will professional athletes -- or anybody else, for that matter -- adjust their attitudes just because they've had their knuckles rapped? That's hardly a teachable moment. It only indicates that you can't put a price tag on being a big enough man to say the right thing.