Is Obama really getting tough on Israel? 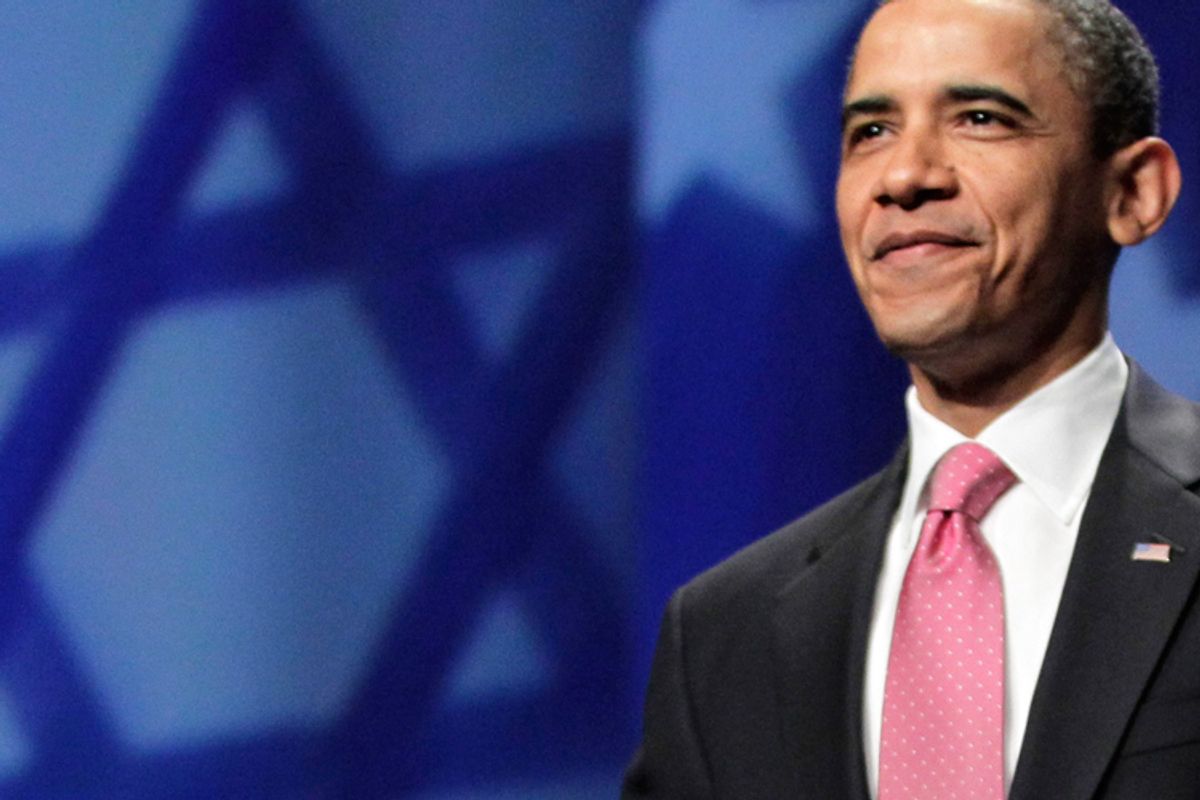 President Obama's big Middle East speech on Thursday set off a flurry of developments in the world of Israel-Palestine politics.

First there was the bitter response by some pro-Israel members of Congress to Obama's call for the 1967 borders of Israel, with adjustments, to form the basis for negotiations. Then there was Israeli Prime Minister Netanyahu's chilly visit to the White House on Friday, followed by another Obama speech over the weekend at the annual conference of the biggest pro-Israel group, AIPAC.

To get perspective on all that's happened, I sent some questions to University of Chicago professor John Mearsheimer, whose 2007 book is a close study of "the Israel Lobby."

There's been an awful lot made of President Obama's statement last week that "the borders of Israel and Palestine should be based on the 1967 lines with mutually agreed swaps." Is this actually a new policy, and is it significant that Obama used this formulation?

Obama said nothing new when he stated that the two-state solution would require Israel to return to the 1967 borders with minor modifications. Anyone who has followed the negotiations over a two-state solution knows that this was the formula on borders that negotiators have been working with since the Oslo peace process began in 1993. In recent years, however, American presidents have not often referred specifically to the 1967 borders, although it has been widely understood that it was impossible to create a viable Palestinian state without going back to those borders and then making a few minor adjustments to allow Israel to keep some of its large settlement blocks.

The Netanyahu government, of course, is adamantly opposed to a two-state solution and instead intends to colonize large portions of the West Bank. My sense is that Obama struck fear in the hearts of hard-line Israelis and their American supporters by specifically talking about returning to the 1967 borders, because that particular language makes it crystal clear that the solution the United States has in mind to the Israeli-Palestinian conflict will require Israel to give up almost all of the West Bank, which it very much wants to keep.

The backlash to Obama's '67 borders line -- not only from Prime Minister Netanyahu but also from pro-Israel Republicans and Democrats in Congress and media voices like the Washington Post editorial page  -- was quite swift. What does this reaction say about the tactics used by, and the current thinking within, the group you call "the Israel Lobby" in your 2007 book?

Anytime there is a clash of interests between an Israeli prime minister and an American president, the lobby almost always sides with Israel against the United States. Since taking office in January 2009, Obama has clashed with Netanyahu three times over settlement building in East Jerusalem and the West Bank. Netanyahu decisively won all three fights and he was able to do so because of the power of the lobby. It is a rare occasion when an American president can take on the lobby and win. Alan Dershowitz was not exaggerating when he said that the lobby "is perhaps the most effective lobbying and fund-raising effort in the history of democracy." Thus, it is hardly surprising that once it was clear that the Netanyahu government was unhappy with Obama’s comments about the 1967 borders, various individuals and groups in the lobby immediately started criticizing the president and siding with the Israeli prime minister. This is business as usual for the lobby, but it is quite disturbing to see Americans almost always siding with Israel against their own country.

What did you think of Obama's speech at AIPAC this weekend?

Given that Obama has limited maneuver room when it comes to dealing with Israel, I thought it was a good speech. I was impressed that he stuck to his guns about the need to go back to the 1967 borders with minor modifications. I was equally impressed that he made the argument that if there is no two-state solution and Israel transforms itself into Greater Israel by absorbing the West Bank and Gaza, it will not be a democracy for long because there will soon be more Palestinians than Jews between the Jordan River and the Mediterranean Sea. In effect, Obama was saying that in the absence of a two-state solution, Israel would become an apartheid state like white-ruled South Africa. In fact, he should have used just those words and noted that two former prime ministers -- Ehud Barack and Ehud Olmert -- have used that same language. Obama needs to keep reminding Israelis and their American supporters that Israel is turning itself into an apartheid state and that this is going to have disastrous consequences for Israel. That is probably the best way for him to win support for a two-state solution among Israelis and American Jews.

The Palestinian leadership is saying it will seek recognition of statehood by the United Nations in September. Do you think this is a shrewd move on the Palestinians' part, and is it likely to significantly change the dynamics of the conflict?

I think it is a smart move for the Palestinian to win recognition at the U.N. for a Palestinian state based on the 1967 borders, although I don’t think it will sharply shift the dynamics of the conflict in the short term. The key to success for the Palestinians is to eschew violence and recognize that they are in a war of ideas with a country that is turning itself into an apartheid state. That is not a hard fight to win. It is no accident that Israel finds itself increasingly isolated these days and constantly complains that it is being delegitimized. That situation will only get worse, as Israel comes to look more and more like white-ruled South Africa. U.N. recognition of a Palestinian state this September will further legitimize the Palestinian cause as well as the two-state solution, and it will further delegitimize the Occupation. This is why Israel is so worried about the General Assembly voting to recognize a Palestinian state based on the 1967 borders.

Do you see any reason to hope the Obama administration will make a significant change in policy on Israel-Palestine in this term or beyond?

There is little chance that the Obama administration will change its policy toward Israel and the Palestinians any time soon. The president and his lieutenants will continue to push gently for a two-state solution, but they certainly will not put significant pressure on Israel to stop settlement building and allow for the creation of a viable Palestinian state. Instead, the United States will continue to give Israel unconditional support as it transforms itself into an apartheid state. Obama, of course, would never pursue such a foolish policy if it were not for the fact that the lobby, which is committed to working hand in hand with Netanyahu to create a Greater Israel, hamstrings him.