The GOP's wrongheaded fixation on taxes

Republican presidential candidates are pushing radical tax agendas. But that's not what America wants, or needs 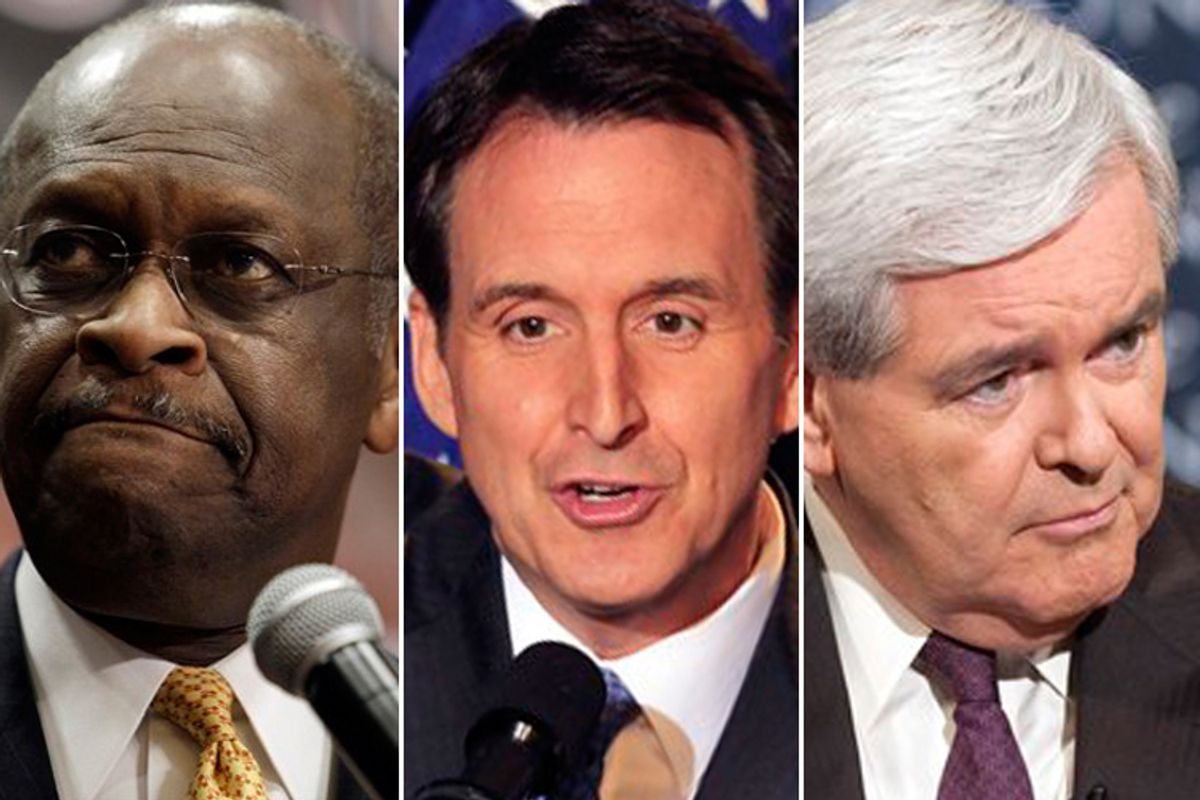 The remaining survivors in the "the incredible shrinking GOP presidential race" are pushing a provocative array of "unorthodox" and radical economic platforms, Politico tells us today.

Ron Paul wants to get rid of the Federal Reserve, Tim Pawlenty has signaled support for a return to the gold standard, and Herman Cain has advocated abolishing the IRS. And just about everybody -- excluding Mitt Romney -- has an exciting new tax plan. Cain is pushing a "Fair Tax" -- a hefty national sales tax that would replace both personal and corporate income taxes. Gingrich is pushing an "optional" 15 percent flat tax and Pawlenty is not far behind. Ron Paul wants to get rid of sales and income taxes, and fund a much smaller government solely via tariffs excise fees and property taxes.

There's much fun to be had exploring the roots of modern Republican economics, though we should probably keep in mind that Mitt Romney's decision to hew to a much more conventional conservative economic line is just one more piece of evidence supporting the case that he could be the GOP's most formidable opponent to Obama in 2012. Radical solutions might work well for winning primaries, but, barring another economic meltdown, their track record in general elections is not so great.

But let's take a little bit of a closer look at how Politico's Byron Tau and Ben Smith frame their story. The third paragraph attempts to give some context for why Republican presidential contenders are pushing "unorthodox" tax plans.

"Part of it is the very high level of unhappiness about taxation," said longtime tax reform advocate and Americans for Tax Reform president Grover Norquist. "And therefore people are looking for radical changes."

Quoting Grover Norquist high up in a story about taxes should be an automatic foul in the game of journalism. He is the very opposite of an impartial commentator. Not only is he always going to say the exact same thing: taxes are bad and everybody hates them, but the evidence we actually have suggests that he is simply not telling the truth.

A poll conducted by the Associated Press in March found that a "a small majority of Americans believe the taxes they pay are fair." A Reuters poll in early May indicated "more than half of Americans say higher taxes should be part of a fix to tame the $14.3 trillion U.S. debt." A Washington Post poll in April found that a whopping 72 percent supported higher taxes on Americans making more than $250,000 a year.

Every new Republican tax proposal, by the way, would end up lowering the tax burden on the richest Americans.

And to top it off, a Pew poll on American priorities conducted in January did not list taxes in the top ten of American concerns: (in order: Economy, Jobs, Terrorism, Education, Social Security, Budget Deficit, Medicare, Health Care Costs, Health Care Legislation, Poor and Needy.)

One could also throw into this mix the fact that Obama cut taxes on most Americans, and the federal tax burden, as measured in terms of a percentage of total GDP, is at the lowest point in 60 years, but that seems almost like piling on. Grover Norquist is wrong: High taxes are not a huge concern for the majority of Americans, and Republican presidential candidates who center their campaigns on radically remaking the U.S. tax system are profoundly misunderstanding what the country needs right now.

2012 Elections How The World Works Taxes