The Justice League of Wall Street 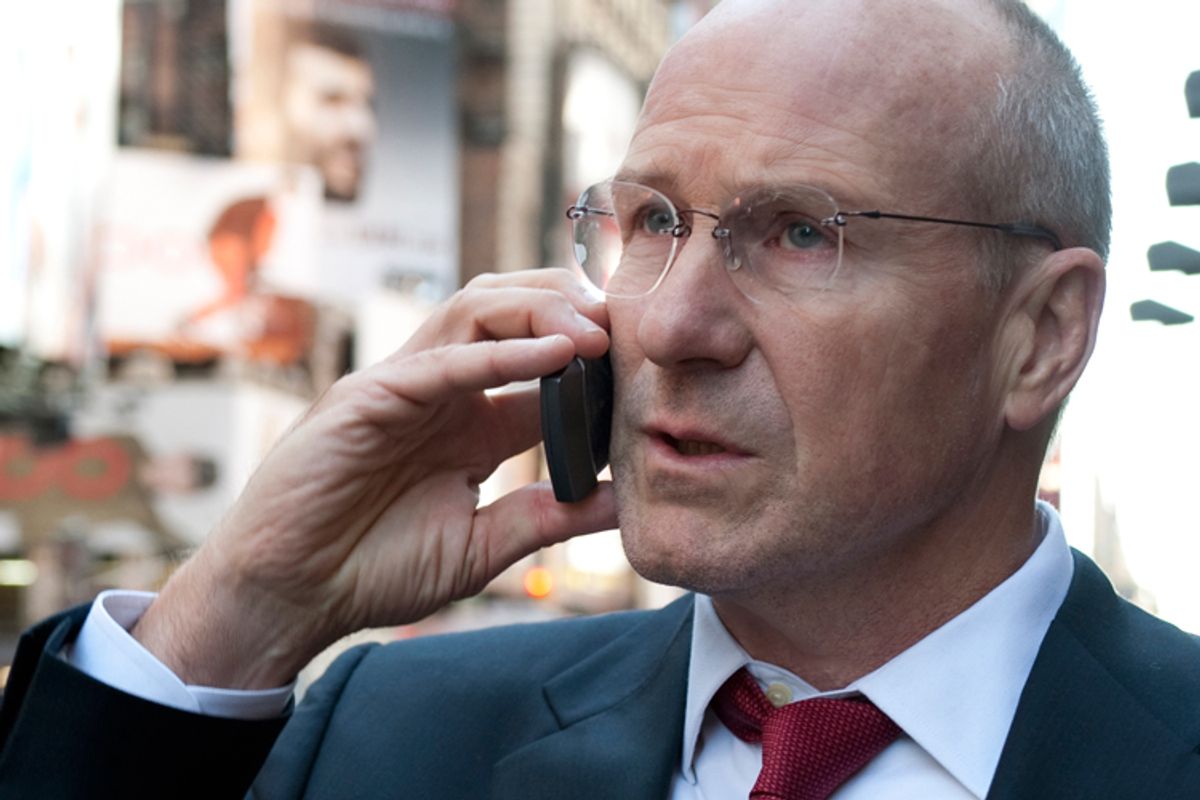 I was going to start this review of "Too Big to Fail" (HBO 9 p.m. Monday/8 Central), a star-studded adaptation of Andrew Ross Sorkin’s book about the 2008 financial meltdown, by suggesting that I might not be the right audience for it, because I went into the story knowing only the general details and big names. But upon reflection, someone like me would seem to be the ideal viewer, because I'm curious about the topic but not versed enough to delve into it without hand-holding.  That dreadful period in fall, 2008 -- when Lehman Brothers imploded and it looked like AIG was about to follow suit and take most of the economy with it -- has been chronicled in books, magazine articles, news specials, even an acclaimed documentary, "Inside Job. " (The latter is especially good -- bouncy and fun yet somehow still edifying and important, like the greatest special that "Frontline" never made.) But this HBO film aims to make the story even more comprehensible (even entertaining!) by summarizing complex events in plain language and hiring name actors to deliver it. An explanation of how lax lending practices undermined the economy might make some viewers drowsy, but not if it's delivered by William Hurt as former Treasury Secretary Henry "Hank" Paulson, or Topher Grace as Paulson's tightly wound but immensely likable chief of staff, Jim Wilkinson.  Or so the thinking goes.

Unfortunately, the film is too inside for outsiders and too outside for insiders. And too much of it feels like one of those instant oral histories you'd read in Vanity Fair -- a lengthy feature delving into the psyches of the titans of industry on the eve of this or that allegedly history-making deal, and showing the awestruck peasants what's it's like to live at the upper echelons of power. How did these bold men pull off such a daring coup/ expansion/ innovation? What kind of car does Federal Reserve Chairman Ben Bernanke (Paul Giamatti) drive, or let himself be driven in? What does Warren Buffett (Ed Asner) eat for breakfast? (Whatever he wants, clearly.)

As adapted by Peter Gould and directed by Curtis Hanson ("L.A. Confidential"), "Too Big" is an impressive work of distillation and compression. It covers a lot of information in less than two hours, and does it in language that simplifies events without oversimplifying them. These executive branch dynamos and Wall Street power brokers mostly talk to each other as if civilians aren't around ("Tim is advocating strongly that we reconsider some kind of fed support"). But every now and then, Gould and Hanson put them in positions where they have to speak plain English to craft a speech or a press release, at which point the film brings the non-CNBC watching, Wall Street Journal-reading audience up to speed. I don't think I really understood why the instability of AIG threatened the world economy until Dan Jester (Joey Slotnick), one of the "mystery men of the financial crisis," laid it out for Hurt's Hank Paulson.

But the urge to illuminate and explain isn't the only driving force behind "Too Big to Fail." The other driving force, judging from what's onscreen, is wealth porn --  the worship of powerful men and their lifestyle. And on that score, "Too Big," for all its attention to detail, is embarrassing. There's a power trip aspect to its glimpse inside the world of superpowerful capitalists -- a striver's awe of entitlement. ("Bill Pullman and Billy Crudup must be flattered that they got to portray Jamie Dimon and Tim Geithner, two of the most talked-about, good-looking guys in finance," Wall Street Journal writer Julie Steinberg asked the film's producer, Paula Weinstein. "Well, our guys are good-looking too," Weinstein replied.)

These are the kinds of guys who suss out a situation, decide that somebody has to make a possibly game-changing phone call to Barclays or Lehman Brothers or Bank of America, then find the nearest qualified underling and order him to make the call -- and when the underling balks, they get up in his grill and hiss, "Make the call!"  They're nonviolent male fantasy figures -- the guys that the 21st century Willy Lomans fantasize about being when they're stuck on hold with the folks in accounting. "The government is not in a position to step in," Paulson says, convening a September 2008 emergency weekend meeting of investment bankers, in hopes of shaking loose enough cash to buy Lehman's bad real estate debts and make it an attractive takeover prospect. "We did the last one. You're gonna do this one." Later, Paulson -- the former chairman and CEO of Goldman Sachs -- warns the group, "We will remember anyone who's not helpful." It's very "Godfather."

But this crew is ultimately presented as benevolent, and at least somewhat interested in the welfare of people who don't make seven figures a year. Jamie Dimon (Bill Pullman), a board member of the New York Federal Reserve Bank and the CEO of J.P. Morgan, seems like the most awesomely charming fellow in the bunch. He's got a sportsman's twinkle in his eye when he announces that he's willing to kick in a billion dollars to make the Lehman bailout happen. He practically shames his colleagues into doing what's right for the country. There are moments where this super-secret band of rich guys seems like the Justice League of Wall Street. There's even a wide shot of Paulson walking down a hallway flanked by several of his former colleagues that evokes the Mercury astronauts' triumphant strut in "The Right Stuff."

The whole cast is strong. Hurt is terrific. James Woods is even better as Lehman Brothers' CEO Dick Fuld, who has the anxious edge of a man who's about to be toppled from his lofty perch and knows it. I can't say a word against the film's photography, editing or pacing. And yes, as a teaching tool, "Too Big to Fail" has value.

Still, I was continually suspicious of what it was showing me and how it was presenting it. The tone is too credulous, even worshipful at times. Without perhaps meaning to, the filmmaking insists: These great men with great powers and great responsibilities! Look at how confident they are!  And how calm in the face of crisis! And aren't they dashing? It's enough to make you forget that these same men, or men very much like them, created the crisis in the first place -- a fact that "Too Big to Fail" only occasionally (and somewhat shamefacedly) admits.

I couldn't surrender to this film because I spent a good part of 2009 barely scraping by in the aftermath of the country's financial collapse, hustling whatever work I could get, saving change so that I could buy new clothes for my kids. The astronaut strut down the corridors of the New York Federal Reserve does nothing for me. I guess that makes me biased.

Television Too Big To Fail