There will never be another Oprah

For all her manipulation and self-aggrandizing, she made people believe in miracles. Now she's going out on top 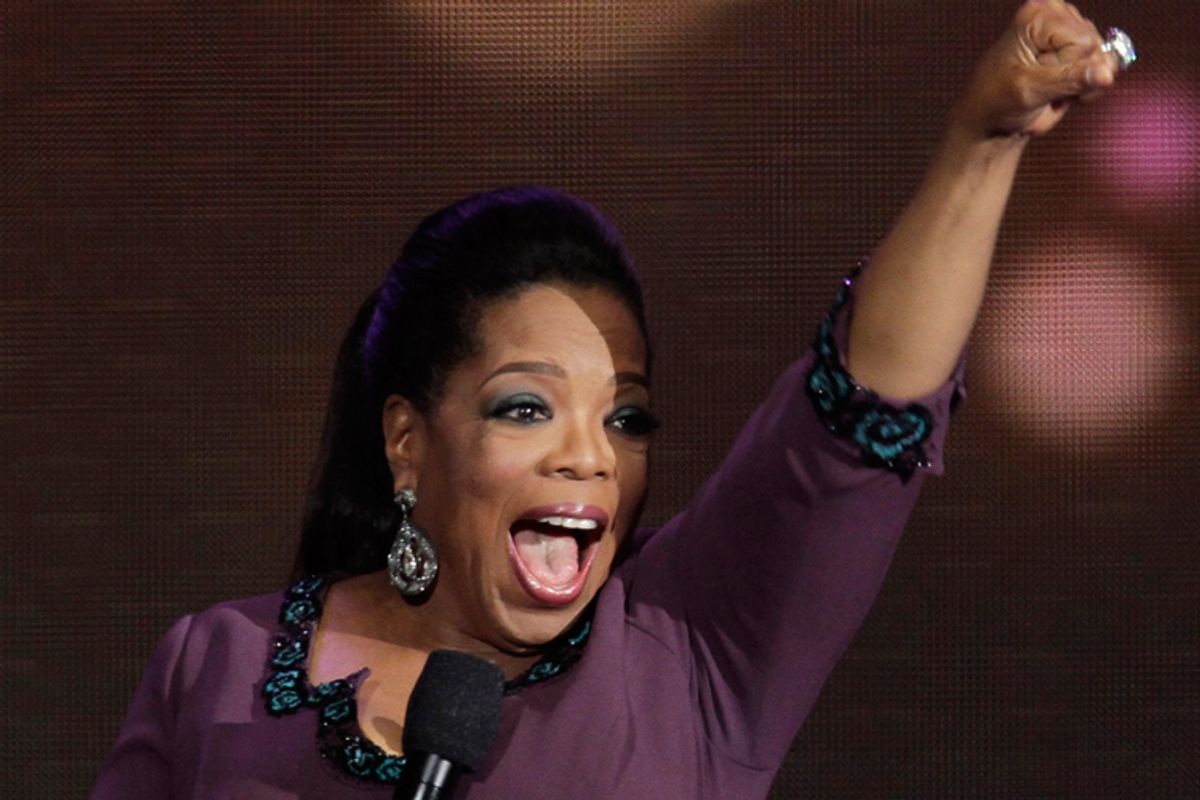 Winfrey's entire empire is built on the idea that miracles -- not just good fortune or persistence or community but honest-to-God miracles -- are within our reach every day. They're in both the amaaaaazing pants that make your butt look smaller and in the sister you never knew you had.  And as her daytime run dwindles down to a final two episodes, let us pause for a moment to praise a woman who has managed to keep viewers believing, right up to the very end.

Much has been written of late about how Oprah is the last of her kind, a relic from an era when daytime television belonged to talk show hosts and that other dying breed, soap operas.  And it's true that a phenomenon exactly like Oprah will not come along again, that the world that created her is long gone. But if you're wondering why the television world has all but ground to a halt in anticipation of her Wednesday finale, why her final few episodes have become a frenzy of celebrity accolades and tear-filled highlight reels, it's not because she's the last space shuttle launching herself gloriously into obsolescence. It's because she still matters.

When Winfrey launched her show in 1986, she was an aspiring Phil Donahue, the host with the microphone and the lineup of dysfunction and shocking revelations. By the end of the '80s -- and right up to the present -- that "My teenage babydaddy is out control!" format had become a daytime TV standard. But Oprah has long since distinguished herself from Maury and Montel and Rikki and Sally Jessy and Jerry. In 1994, she made the bold and public decision to steer her show away from tabloid sensationalism and take it in a more empowerment-oriented direction.

You know the rest. A book club that turned the likes of Wally Lamb, Edwidge Danticat and Barbara Kingsolver into full-blown literary superstars -- and got viewers to pick up Tolstoy, Faulkner and Dickens. An international "angel network" charity "to make a difference in the lives of others." Episodes on everything from how not to look old to how to save your family from carbon monoxide poisoning. And buckets and buckets of tears.

You can roll your eyes at her shameless manipulation. You can call her show formulaic and self-aggrandizing -- in fact, let me do it for you. Oprah is a woman who could make Bono think, "Now there's somebody with a messiah complex." She has given an exasperating amount of airtime to dubious self-help shtick like "The Secret," and crackpot "health" experts like Suzanne Somers and Jenny McCarthy. She has proven, time and again, that to follow all of her advice would be an exhausting, expensive fool's errand.

Here comes the "but."

There's a reason this woman is still such a powerful influencer, one who can leave the cattle industry quaking and whose departure is sending the publishing industry into a getting-drunk-at-lunch level spiral of despair. There's a reason her voice still stands out, even in a media world that's been exponentially diluted by cable and Internet. It's because unlike the Jerrys and the Maurys she began with -- and unlike the reality show divas and intervention-needing hoarders who came after -- Oprah traffics in just one commodity: happiness.

Whether she is waxing rhapsodic on a type of pound cake or offering a redemptive message of hope in the face of unfathomable tragedy, she has remained remarkably, consistently on topic. Seven years ago, when she famously gave away that roomful of "cute little G6's," I wrote that her allure is in her ability to make grown-ups believe that life can offer pleasant surprises. On Monday, with each superstar trotted out to sing and dance her praises, she was still at it. That's Oprah in a nutshell -- Look, America, it's Beyoncé! It's a car! It's Danny Zuko, whisking you off to a land down under!  No one is going to angrily throw a chair on Oprah. Someone might maniacally jump and down on it, but that's not the worst thing that could happen.  Who will give us that, five afternoons a week, now?  When the curtain closes and Winfrey finally shatters into a million little pieces, there will never be another "Oprah." Guy Fieri and Rachael Ray are developing a new series together? Well whoop-di-doo.

Oprah has not just endured but thrived because no matter how much trash talk and backstabbing and mental illness television throws at us, there will always be those of us who long for something better. And with her hugs and tears and confessional, intimate style, it's easy to believe Oprah longs for that too. Life hands us wars and floods and sick children. Oprah hands us car keys and money for schools and stories about people who are trying to do good in the world and not be jerkwads. Those aren't crazy dreams that seemed interesting in 1986; they're what get us the hell out of bed in the morning when we feel like throwing in the towel. We still need to know some things are worth hoping for, that life can offer serendipity instead of shocks, that cynicism is overrated and compassion is underused. And even after 25 long years, we still need Oprah.