Why Herman Cain and the GOP keep misquoting the Constitution

Dirty secret: The document Republicans keep accidentally reading from is the one that holds up better 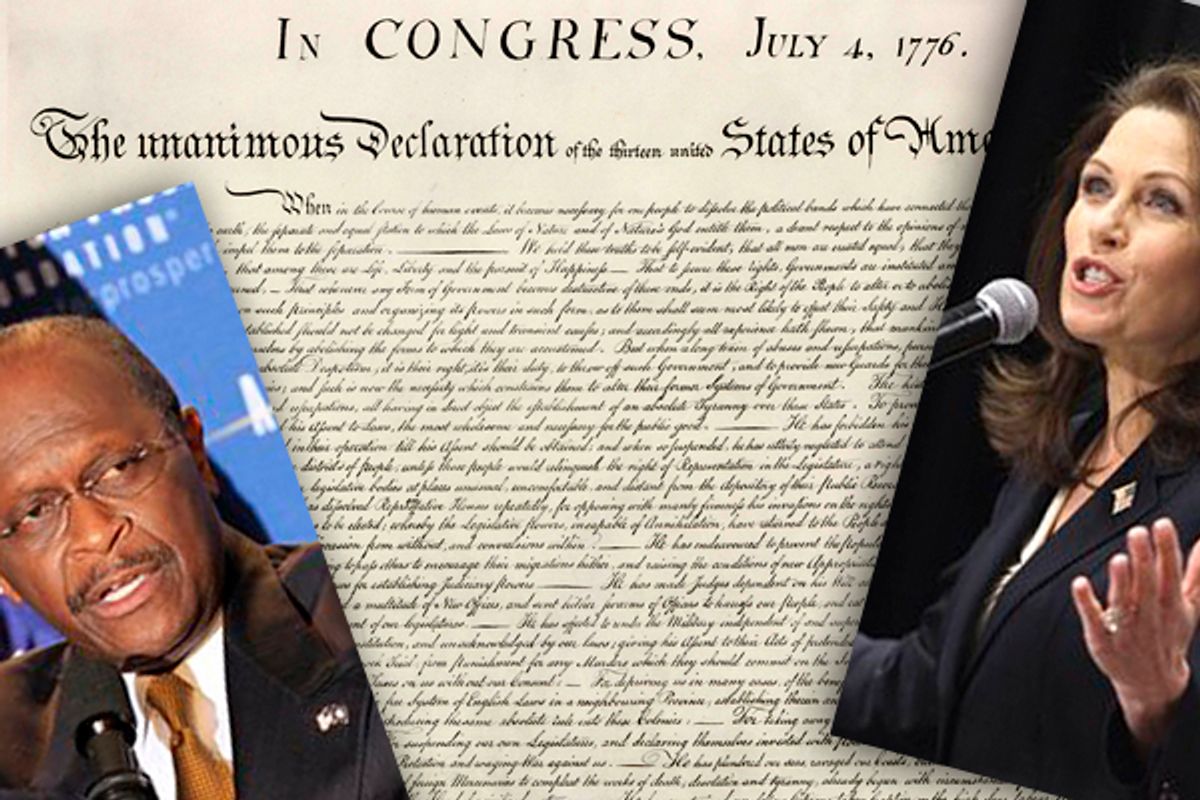 And I know that there are some people that are not going to do that, so for the benefit of those who are not going to read it because they don’t want us to go by the Constitution, there’s a little section in there that talks about "life, liberty and the pursuit of happiness."

That, of course, is not from the Constitution. It's from the Declaration of Independence. The Declaration is the inspiring one with the stirring rhetoric. The Constitution is basically a very dry series of instructions for organizing a government. You can understand why speechwriters would gravitate toward the non-legally binding one. ("Each House shall keep a Journal of its Proceedings, and from time to time publish the same," has never been a great applause line.) As Republicans learned when they read the thing out loud, the Constitution is archaic and boring and lots of it no longer applies anymore. The Declaration, though, can't be superseded or amended. It's an idealistic statement of principles, not the result of painful deliberation between competing interests. It's the nation America's founders aspired to be, not the messy one those guys actually created. The Declaration is "all men are created equal," the Constitution is the three-fifths compromise. And that's why Republicans sometimes like to "mistake" the Declaration for the other one, the one they recently all started carrying pocket copies of.

John Boehner himself made this same mistake last year:

Michele Bachmann is the most egregious proponent of the "the Constitution prohibits what I don't like and says what I wish it said" school of analysis. If you believe the Constitution to be a divinely inspired statement of of America's perfection, you basically have to also believe that "founders" (like John Quincy Adams) "worked tirelessly" to end slavery, instead of specifically writing the document to accommodate it.

Herman Cain may wish, as he said, that "we don't need to rewrite the Constitution of the United States of America," but we did, and we rewrote it more than two dozen times so far. Even those mostly very nice amendments, designed to fix flaws that were baked into the government by our wise founders, aren't particularly poetic. But the Constitution is a work in progress, despite the wishes of the conservative movement that it specifically prescribes a perfect, right-wing America, unchanging and timeless. It contains essential (and oft-ignored) checks on legitimate tyranny -- the tyranny of a police state, not the tyranny of "a welfare program I dislike" -- and the First Amendment is one of the craziest, best ideas a government ever came up with, but if you go to it searching for "the ideals ... your parents believed in," you'll come back disappointed. Unless your parents had a lot of opinions on who has jurisdiction over criminal cases involving ambassadors.

Of course, even the Declaration drags a bit, when it lists King George's many crimes. But you form a more perfect Union with the rhetoric you have.