She's being urged to run for Scott Brown's Senate seat next year. Here's why it would be a bad move 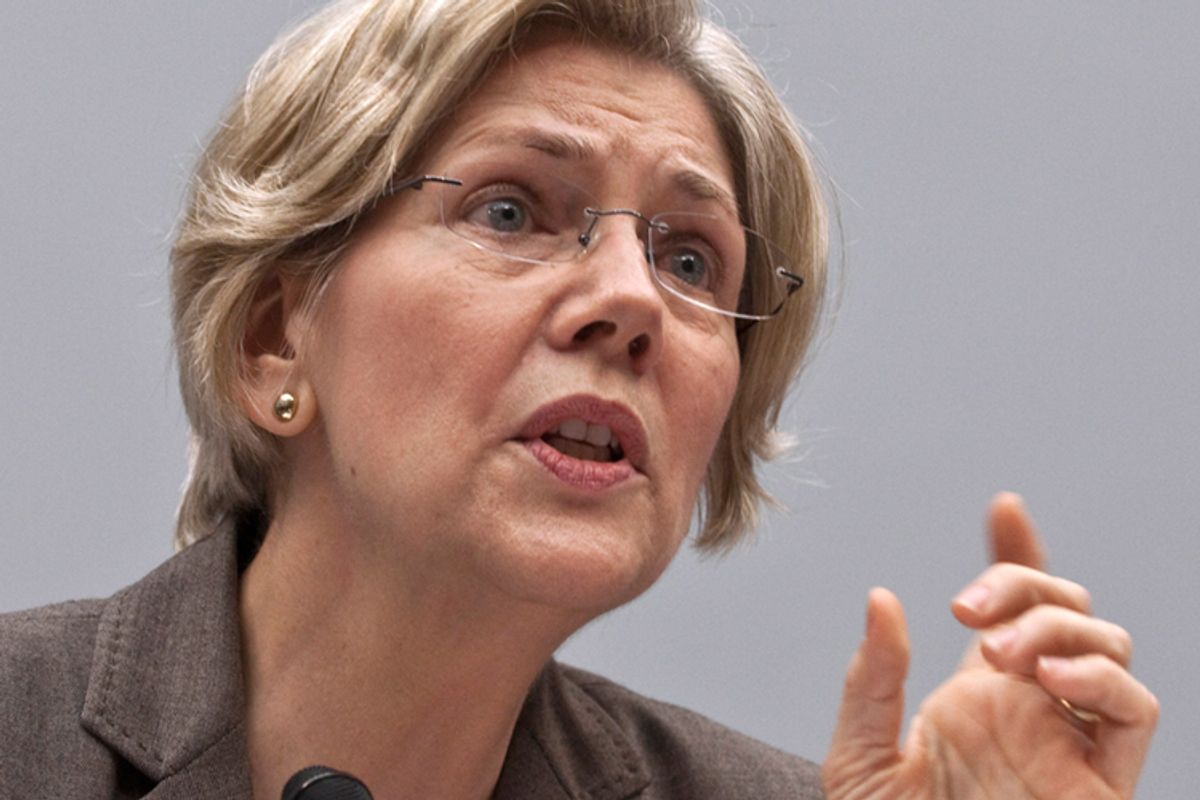 Apparently, Democrats are now urging Elizabeth Warren to give up her effort to win confirmation as the head of the new Consumer Financial Protection Bureau and instead to run for the U.S. Senate in Massachusetts, where Scott Brown will stand for reelection next year.

The 61-year-old Warren, according to the New York Times, is "intrigued but far from decided." If she's flattered by the suggestion, it's certainly understandable, but her answer should be a quick and firm "no."

Yes, in theory, Warren, thanks to her role as one of the financial industry's chief critics, would make a fine candidate -- someone who could make a case against Brown and his fellow Republicans with unusual moral clarity. That she is something of a rock star among national progressive activists would also help her raise significant money.

But it's a trap: Like it or not, Brown is very, very likely to win a full term next year. His personal popularity is startlingly high -- he is far better liked than Massachusetts' two top Democrats, Gov. Deval Patrick and Sen. John Kerry. He runs well over 50 percent and crushes all of his potential challengers in head-to-head polls. (This is evident even in polls conducted by Democrats.)

Democrats enjoy giving Brown grief over his efforts to satisfy the GOP's base (lest he receive a serious primary challenge next year) while also breaking with his party enough that Tea Party-phobic swing voters in the Bay State see him as an "independent" legislator. Viewed up-close, this can be a messy balancing act (as we're seeing now with Brown's flip-flopping on Rep. Paul Ryan's Medicare plan). But most voters don't watch this stuff too closely. What they know is that they really like Brown personally and that they've heard more than once in the last year about how he's bucked his party (on a jobs bill, on Wall Street reform, on the START treaty, and now even on Medicare) and angered conservative activists.  This is the same formula that Republican Bill Weld used when he scored a record-shattering landslide (42 points) in his 1994 gubernatorial reelection campaign.

Granted, Senate campaigns are different than gubernatorial races, and 2012 will be a presidential election year, which should boost Democrats up and down the Massachusetts ballot. But even then, there's every reason to believe Brown will survive. It won't be a 42-point margin, but it should still be reasonably comfortable.

Would Warren's presence as the Democratic candidate change this? Probably not. While she is well-known to many Democratic activists, she is not exactly a household name among swing voters. Her name probably has the most resonance in the state's most liberal areas -- Cambridge, Brookline, Newton, Northampton and so on. But these are the only areas where Democrat Martha Coakley did not have a problem in her 2010 race against Brown. (She claimed 85 percent of the vote in Cambridge, for instance.) So exciting voters in the liberal/academic pockets of Massachusetts won't do much for Democrats against Brown; they already squeezed all they could out of these areas in '10 -- and it wasn't enough. To beat Brown, Democrats would need to make inroads in the small and midsize cities (like Fitchburg, Lowell and Quincy) where Brown did so well in '10, and in middle-class bedroom communities. (It's a complicated subject, but it's also worth noting that the track record of female candidates seeking high-profile office in Massachusetts is ... not good.)

It's also an open question whether Warren would even be able to survive a Democratic primary. Right now, four other Democrats are in the race of actively exploring it: Alan Khazei, who finished third (with 13 percent of the vote) in the Democratic primary to oppose Brown in last year's special election; Setti Warren, the first-term mayor of Newton; Robert Massie, an activist who was the party's 1994 nominee for lieutenant governor (part of the ticket that lost to Weld by 42 points); and Warren Tolman, a former state legislator who was the party's 1998 candidate for lieutenant governor (on a ticket that lost to Paul Cellucci by 4 points). It's unclear how many -- if any -- of these men would defer to Warren.

So: Victory in the Democratic primary would not at all be a given for Warren. She might just be the next Robert Reich -- the academic and former labor secretary who mustered 25 percent (a distant second) in the 2002 Democratic gubernatorial primary.  And even if she were to win the nomination, she'd be very unlikely to unseat Brown. No wonder, according to CNN, that Warren would much prefer it if Obama offered her a recess appointment -- meaning she could bypass Senate confirmation -- to head the CFPB. It's hard to see a Senate race being anything but frustrating for her.