Volcanic ash will cancel up to 500 flights 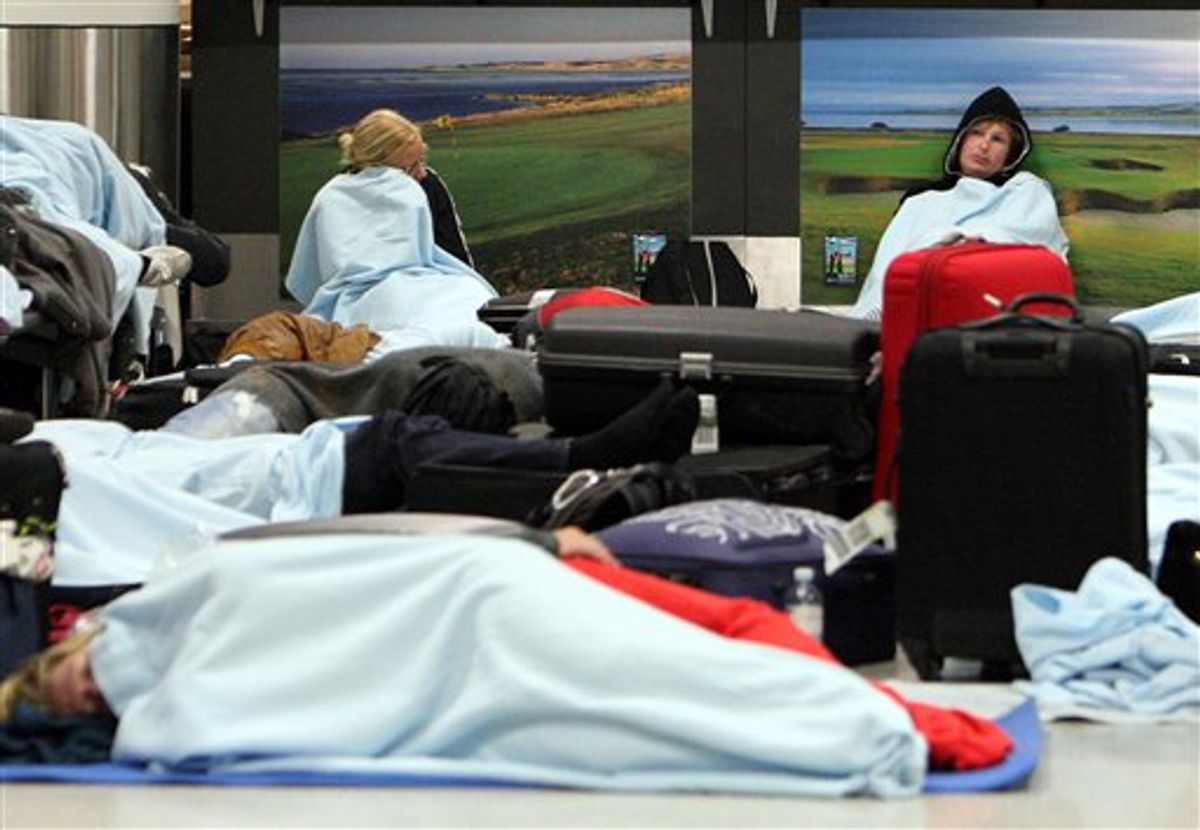 Passengers rest on the floor as their flights have been canceled at Edinburgh Airport in Edinburgh, Scotland Tuesday, May 24, 2011. A dense ash cloud from an Icelandic volcano blew toward Scotland, causing airlines to cancel Tuesday flights and raising fears of a repeat of last year's huge travel disruptions in Europe that stranded millions of passengers. (AP Photo/Scott Heppell) (AP)
--

The spread of dense ash from the erupting Iceland volcano could force the cancellation of up to 500 commercial flights in Northern Ireland, Scotland and parts of Scandinavia, the European air traffic agency said Tuesday.

Between 200 and 250 flights had already been canceled, said Brian Flynn, head of network operations at Eurocontrol. There are just over 30,000 flights within Europe on average every day at this time of the year.

Ash from the Grimsvotn volcano already forced President Barack Obama to shorten a visit to Ireland, and has raised fears of a repeat of huge travel disruptions in Europe last year when ash from the Eyjafjalljokull volcano stranded millions of passengers.

Flynn said he did not expect Obama's European tour to be further affected and authorities have said they don't expect the kind of massive grounding of flights that followed last year's eruption. They say procedures have been improved since then and the cloud is currently not expected to move over continental Europe.

The British Civil Aviation Authority said strong winds over Scotland was making it hard to predict the direction in which the ash would move, but air traffic controllers said it would reach airports in Scotland, northern England and Northern Ireland on Tuesday afternoon.

British Airways suspended all its flights for Tuesday morning between London and Scotland, while Dutch carrier KLM and Easyjet canceled flights to and from Scotland and northern England at the same time. Three domestic airlines also announced flight disruptions.

National Air Traffic Services, the agency that controls air traffic over Britain and the eastern Atlantic, said airports will remain open but flights will be affected between 1:00 p.m. (1200GMT) and 7 p.m. (1800GMT) local time.

NATS said in a statement that the ash will affect airports in Londonderry in Northern Ireland, Glasgow, Edinburgh and Prestwick in Scotland, and Newcastle, Carlisle, Durham Tees Valley and Cumbernauld in northern England. It advised passengers to check with their airlines before travelling.

Budget airline Ryanair said it did not believe there was a need to cancel all flights between Ireland and Scotland, and said it would meet with regulators Tuesday morning to discuss the issue.

Norwegian airport operator Avinor said the ash cloud that swept over southwestern Norway earlier Tuesday has now moved away from the coast and no longer affects the airports in Stavanger and Karmoey. However, it said the ash is expected to return to southern Norway in the afternoon.