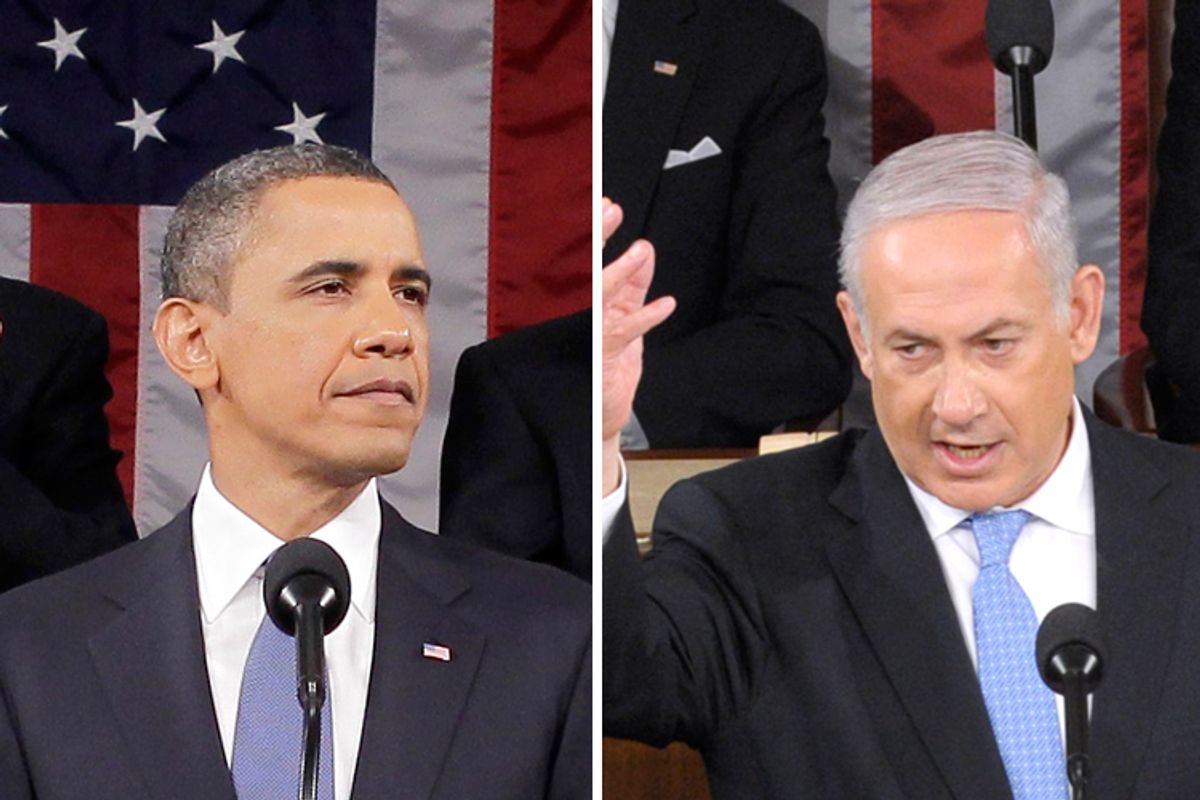 This morning, Israeli Prime Minister Benjamin Netanyahu addressed a joint session of the U.S. Congress, just as the U.S. President does each year.  Here is how the American Congress -- especially the super-patriots of the American Right -- reacted to their own President the last two times he addressed them (with frosty coolness and even passive-aggressive hostility):

And here is how the super-patriots of the American Right -- largely joined by their Democratic colleagues -- reacted to the speech given today by this foreign leader: with multiple standing ovations, including for ludicrous and absurd proclamations such as equating Hamas with Al Qaeda and claiming that Israel is "not a foreign occupier" in the West Bank:

Indeed, according to ABC News, Netanyahu received more standing ovations from the U.S. Congress (29) than the U.S. President did the last time he spoke (25); all of the ones Netanyahu received were from the super-patriots of the GOP caucus (and most from the Democratic caucus as well), whereas those right-wing patriots joined in only a small fraction of the ones received by their own country's President.

What makes this more remarkable still is that this foreign leader whom they were cheering so boisterously and continuously just completed a public, ugly conflict with the American leader and has a long record of demonstrated indifference to American interests; yet the super-patriots of the American Right sided so brazenly and publicly with this foreign leader over their own country's President.  Meanwhile, both political parties in Congress are in a frantic competition to see which one can lavish Netanyahu with more obsequious praise; this statement sent out in the name of Democratic Sen. Robert Menendez of New Jersey is typical of the entries.  For his part, Senate Majority Leader Harry Reid ran to AIPAC to undercut (and rebuke) his own President and the leader of his own party on Israel, something that -- as Andrew Sullivan correctly observed --  would be inconceivable on any foreign policy issue other than Israel.

In sum, the same faction that spent the last decade demanding fealty to the Commander-in-Chief in a Time of War upon pain of being accused of a lack of patriotism (or worse) now openly sides with a foreign leader over their own President.  The U.S. Congress humiliates itself by expressing greater admiration for and loyalty to this foreign leader than their own country's.  And because this is all about Israel, few will find this spectacle strange, or at least will be willing to say so.

UPDATE [Wed.]:  Siding with this foreign country over one's own is, as I indicated, by no means confined to the GOP.  Here is today's headline on the front page of The Washington Post:

The article notes that "top Democrats have joined a number of Republicans in challenging President Obama’s policy toward Israel," leaving Obama "largely isolated politically."  In one sense, the pro-Netanyahu reaction of the GOP is worse, since they spent the last decade accusing anyone who sided with foreign countries over their Commander-in-Chief of being subversive, but in another sense the Democratic reaction is worse, since the President's own party -- especially its leadership -- would never, ever publicly criticize him this way on any foreign policy issue other than Israel.  In any event, please remember that you must not speak of the immense power of the Israel Lobby lest you reveal yourself to be a conspiratorial hatemonger.  I hope that's clear.