Are we done with Rush Limbaugh yet?

His ratings are falling, along with most of the rest of the right-wing talkers. Is his era finally over? 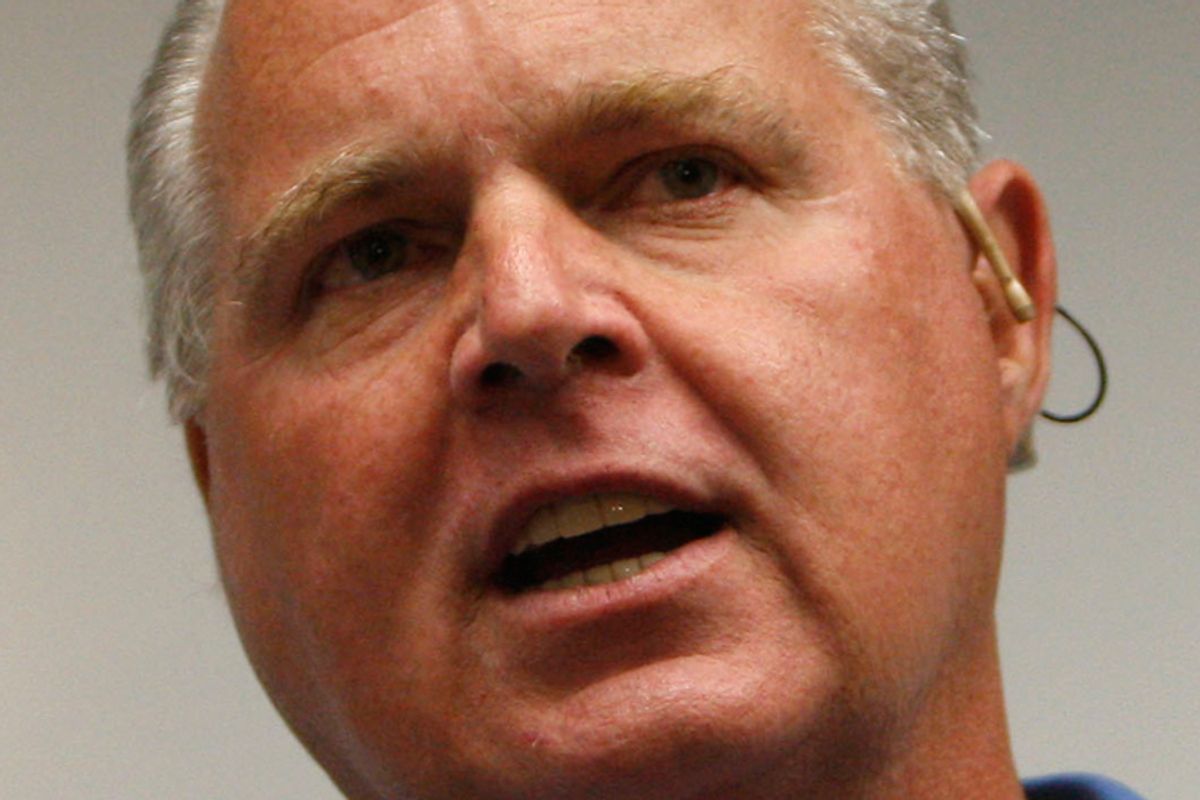 Are we sick of Rush Limbaugh yet? We might be! Crains reported yesterday that the April Arbitron report showed the conservative movement's most powerful mouthpiece -- and Sean Hannity, his much-dumber distant rival -- slumping in the ratings after the midterms:

Top-rated Mr. Limbaugh has taken the biggest fall. He had a 3.0 share of listeners for his WABC-AM midday slot -- a 33% slide from October and from last April. Mr. Hannity’s afternoon show was down 28% from its fall peak, as was fellow conservative Mark Levin's evening program.

Rush isn't the only right-wing radio shouter with a declining audience. Glenn Beck was dropped by stations in New York, by a chain of stations in Connecticut, and by a station in Madison, Wis.; Hannity and Beck were both dropped in Philadelphia.

The News Beast's John Avlon suggested in March that right-wing talk radio's worst enemy may be the Portable People Meter, which measures audiences and demographic numbers much more accurately than the old surveys. It turned out that a shrinking number of old white people listen to conservative talk radio -- which is such a coincidence, because the Republican Party has a very similar problem!

But Rush's big, national audience is not literally dying off that quickly, so why the decline? Rush should be required listening for conservatives curious about the Republican Party's 2012 candidates. Unless, of course, conservatives are again burned out on politics and demoralized about the largely unlikable characters running for the nomination.

Or maybe people are just tired of Rush's shtick? We're still suffering from mass unemployment after decades of wage stagnation, and while it seems like no one in the press particularly cares anymore (they've all moved on to THE DEFFY-CIT), it also seems like the multimillionaire jerk-off radio shouter aggressively doesn't care, as Digby pointed out with a recent Rush transcript. "Sorry, I don't participate in recessions," he said. Would you really want to listen to that for much longer if, say, you did participate in recessions, unwillingly?

While an increasingly resentful and pissed-off populace should be good news for America's loudest, smartest right-wing emcee, he doesn't seem to be winning new converts to his cause. I'm richer than you because I'm morally superior to you is not a very compelling argument, these days (but on the other hand, people voted for Rand Paul).

Rush has been in the wilderness before. The Bush years were sort of fallow for him -- who cared what he had to say without a Clinton to attack? -- though he had some fun in 2004. He had no fun in 2008, when no one seemed to care about him anymore. He was secretly praying for Hillary Clinton to win and openly trashing John McCain and it really seemed like his era had passed.

Unfortunately, having the Democrats back in charge and a black man in the White House made Limbaugh's constant, giddy stoking of racial resentments "newsworthy" and his willingness to "go there" made him an irresistible sound-bite source. Most annoyingly, Democrats decided that Rush was good for them. Because he was and is one of the least liked people in America. He polls about as bad as Michael Lohan. And his numbers are now reflecting the fact that most of America really does not like this guy.

He won't truly go away any time soon, of course. Rush will still be on the air daily in most of the nation until he finally retires to his giant, tacky home with his lovely new wife (or to a bigger, tackier home, with a lovelier, newer wife). Lots of small- and mid-market stations are given his show for free, making it a very cost-effective way to fill three hours of airtime. He still beats everyone else in the field. We won't know how much sway he has until the primaries start in earnest, but I hope very much for a campaign season where I don't have to care about whatever latest awful thing he said.