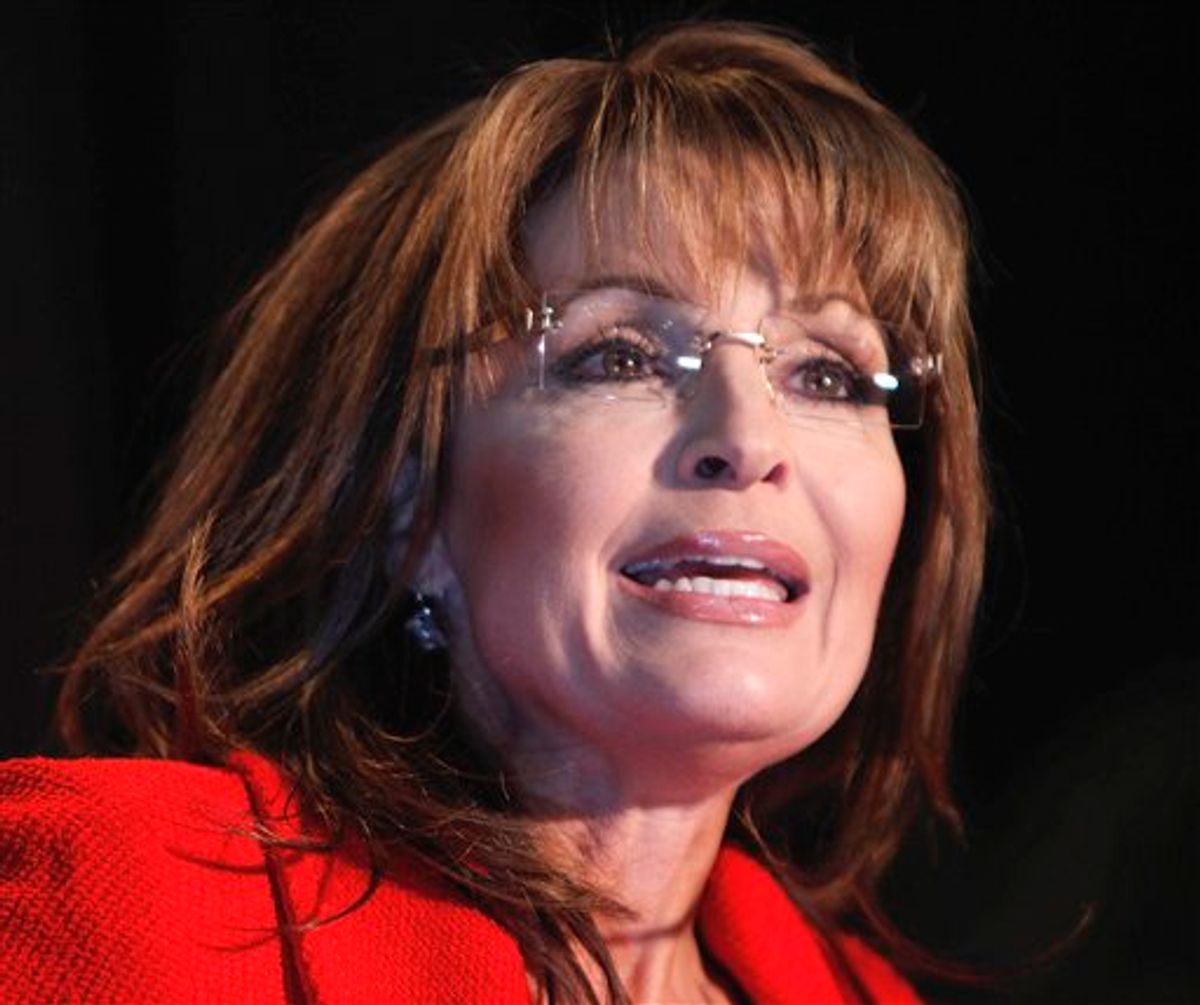 FILE - In this May 2, 2011 file photo, former Alaska Gov. Sarah Palin speaks in Lakewood, Colo. The more Republicans get to know their potential presidential candidates, the less happy they are with their choices. Some 45 percent in an AP-GfK poll say they're dissatisfied with the GOP candidates who have declared or are thought to be serious about running, up from 33 percent just two months ago. (AP Photo/Ed Andrieski, File) (AP)
--

Tucker Carlson's Internet Tendency has published a series of private Twitter messages sent by Rebecca Mansour, Sarah Palin's closest advisor, to an unknown "online-only acquaintance." The direct messages forwarded to the Daily Caller were sent in the summer of 2010, and they contain a number of unflattering descriptions of various figures in the Republican party and the conservative press. The Caller does provide the (partially redacted) original messages, in case you don't want to rely solely on their interpretation of the material.

The DMs are not that outrageous or shocking, because we already all know that Palin and her inner-circle are paranoid and petty. It's news that they hate Mitt Romney? The fact that Palin's operation is an unprofessional cult of personality is public knowledge. But they're still entertaining for anyone fascinated by Palin and her camp.

Mansour calls Palin "BigBoss" and Mitt Romney "Mittens." She says "Evangelicals 4 Mitt" is a "fake org." She calls blogger and CNN personality Erick Erickson "a total douchebag" and a "greasy dumb ass with a talent for self-promotion." There is some outrage about Joe McGinniss, and an attempt to leak some semi-damaging stuff about Alaska radio host Shannyn Moore. [Update: Moore writes to say Mansour's claims are "not true, so not semi-damaging."]

And there are messages from when Bristol Palin and Levi Johnston were (briefly) back together, about how "heartbreaking" Bristol's decision was to Sarah and Todd. ("Two words: Patti Davis. Okay three more: Ron Reagan Junior. Two more: Billy Carter. Doesn’t your family have one?") That is the most embarrassing material, but even these messages are mostly harmless:

20:05:28: She’ll never publicly disown her daughter. She doesn’t have it in her. My mother would’ve never been able to do that either. Privately…

20:06:42: she will hold her at arm’s length. Even Thatcher was never able to disown her screw up son Mark. It’s a Mom thing.

I am not going to tut-tut about the journalistic ethics of this, because I read the story with great interest, and Sarah Palin's closest advisor's uncensored opinions about politics certainly seem newsworthy to me. Politico's Ben Smith says he was offered this material last November, for a price, but Tucker Carlson says the Caller doesn't pay for stories. The leaker seems to have done it for the lulz:

" I wasn't serious back then. I was just ... trolling you for fun. The Internet can be a boring place sometimes. :\," the correspondent wrote.

I kind of can't wait to see how Palin responds to this. She will probably call Tucker Carlson a child-molester on Facebook, for starters.