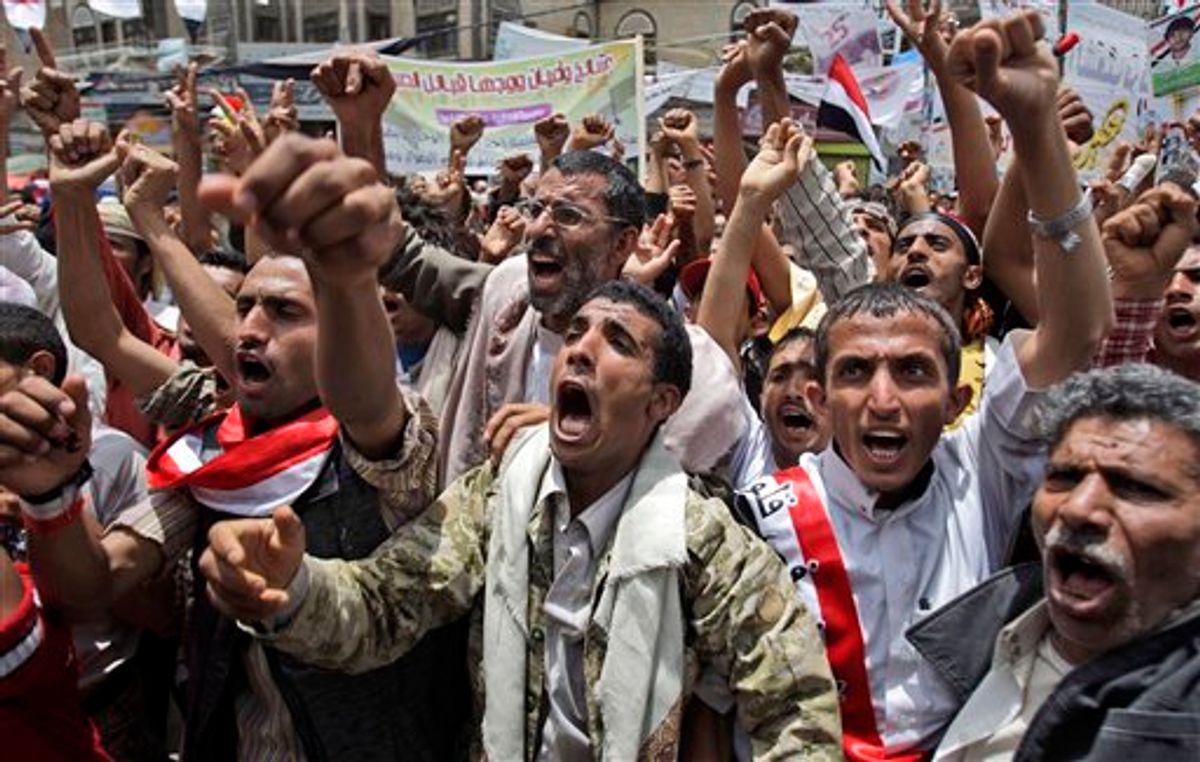 Fighters for a powerful Yemeni tribe sealed off key government buildings -- including headquarters of the ruling party -- as the revolt against President Ali Abdullah Saleh spilled into the heart of the capital Tuesday amid fierce clashes with government forces.

The decision by the leader of the Hashid tribe to unleash its fighters sharply boosts pressure on the embattled president and suggests Yemen could be heading toward a potentially bloody showdown between well-armed tribal militias and pro-Saleh troops. Saleh has refused to step down despite three months of nearly nonstop street protests calling for an end to his 32-year rule.

Some military commanders have already defected to the opposition. But the move to join the battle by the Hashid, Yemen's biggest tribe, could set Yemen on a dangerous path by forcing the other clan leaders around Yemen to pick sides.

Yemen is a patchwork of tribes with strong militias whose support is critical for Saleh. In a bitter snub, the head of Saleh's own Hashid tribe, Sheik Sadeq al-Ahmar, backed the uprising in March but held off sending his militiamen against government forces under an accord to keep the protests unarmed.

That changed Monday after al-Ahmar accused government forces of trying to storm his home -- triggering battles in the central Hassaba district, the site of many key government offices.

The clashes have killed at least six people and injured more than 40, a medical official said.

As the fighting rages, tribesman for the Hashid used locks and chains to seal off several important buildings, including the ruling party headquarters and the ministries for industry, economy and local administrations. Meanwhile, hundreds of lower-level tribal leaders held a meeting in the Hassaba district in a show of solidarity with al-Ahmar.

The escalating clashes came after Saleh refused to sign a U.S.-backed deal, mediated by Gulf Arab neighbors, that offered immunity from prosecution under a timetable to step down within 30 days and transfer power to his vice president.

On Monday, automatic weapons, mortars, and tanks were used to blast some buildings in the battle with the tribal forces, setting government offices ablaze. Government troops took shelter inside the state news agency building while trading fire with tribal fighters holed up in the Ministry of Industry across the street.

By the end of Monday, Hashid militiamen appear to be largely in control of the districts around the ministries. A medical official said that six al-Ahmar militiamen were killed and 37 others injured. The Interior Ministry said Saleh's forces lost one of soldier and five others were wounded.

The medical official spoke on condition of anonymity because he was not authorized to speak to the press.

Saleh's forces -- backed by his son's well-trained and equipped Republican Guards -- are concentrated in the southern part of the capital, where the presidential palace and military camps are located.