From Jamie Foxx to Maria Shriver, the stars turn out to celebrate and honor daytime's favorite talk show host 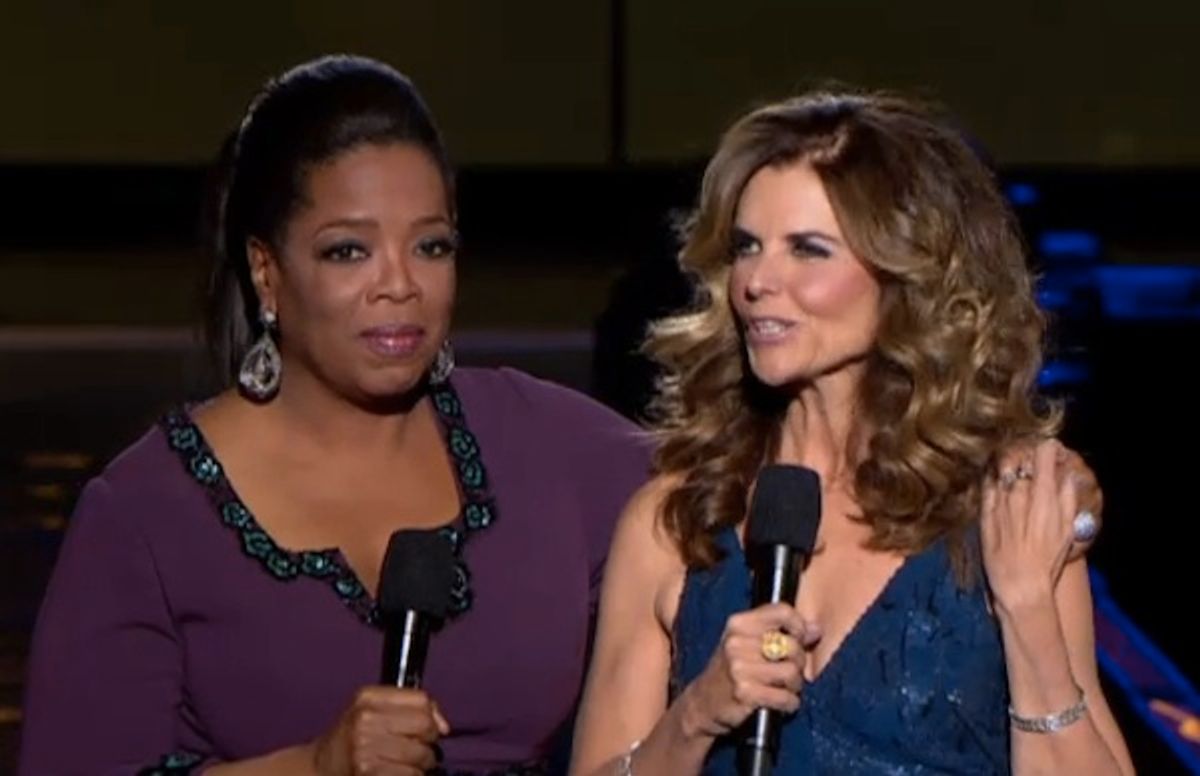 Oprah Winfrey's final show airs tomorrow, and today's second part of her "Farewell Spectacular" saw celebrities turn out in full force, a touching tribute to the woman who has been America's best friend for 25 years.

Oddly enough, Oprah spent most of her show not trending on Twitter, though "surprise" guests like Tom Hanks, Michael Jordan, Maya Angelou, Jerry Seinfeld, Jamie Foxx, Stedman and Gayle all did. I use quotation marks because there are no surprise guests for Oprah ... if Obama himself had taken the stage to wish her well, it would not have been that unexpected.

So perhaps the biggest surprise of today was a heartfelt speech by Oprah's silent partner Stedman Graham. Looking nervous, Stedman said that he didn't know of anyone else who could change so many people's lives and also bring a bagged lunch to work.

Meanwhile, Dr. Maya Angelou's contribution to the ceremony was a new poem, which she read accompanied by Alicia Keyes on the piano:

"Unplanned and unrehearsed, this big-eyed black girl from Mississippi, showed the world how to look at itself ... She listened to the rich and the poor, the famous and the infamous ... For 25 years she listened. ... She said, 'Be strong, be kind, and call me Oprah.' I can. I will. And I shall. Be Oprah. I am. Oprah. Oprah. Oprah."

Of course, not everyone took the same approach to honoring the living legend. Jerry Seinfeld used his five minutes to complain about his marriage, women in general, and how it's Oprah's fault that ladies mock their husbands. Then Jerry took his seat, directly next to Oprah, because they are best friends anyway.

Simon Cowell introduced a musical number where Rosie O'Donnell sang a reworked version of "Fever," with special appearances by Dr. Phil, Nate Berkus and Dr. Oz (the last of which said Oprah's gift to the world was teaching everyone about S-shaped poop). Usher, Kristin Chenoweth and Aretha Franklin filled out the non-ironic singing portion of the show.

The oddest moment of the episode was when Maria Shriver joined Oprah onstage with Gayle King to thank her friend for "giving me  ... the most important gift of all ... telling me the truth." It was a loaded moment, though if Arnold was watching, the camera didn't cut to him. This was Oprah's day, after all.