Undeterred by this Saturday's distinct lack of a Rapture, Harold Camping adjusts his end-of-world forecast 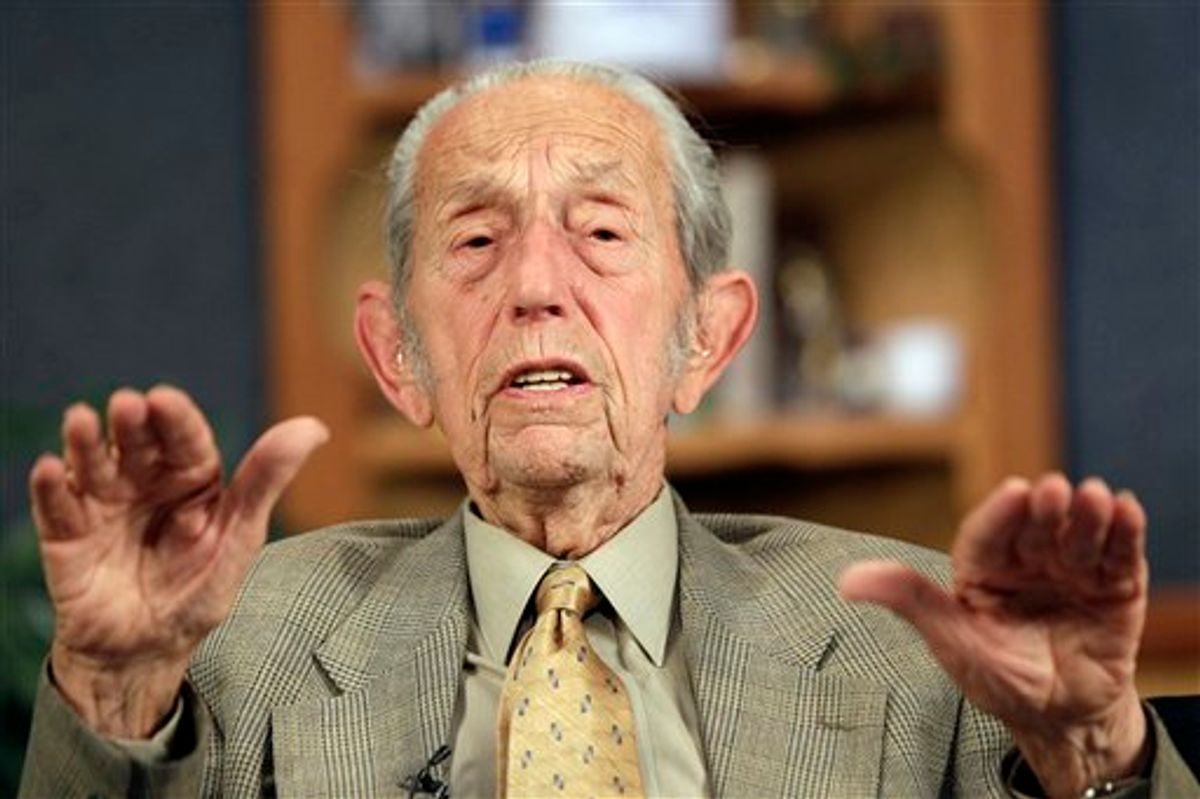 Harold Camping speaks during a taping of his show "Open Forum" in Oakland, Calif., Monday, May 23, 2011. Camping says his prophecy that the world would end was off by five months because Judgment Day actually will come on October 21. (AP Photo/Marcio Jose Sanchez (AP)
--

As crestfallen followers of a California preacher who foresaw the world's end strained to find meaning in their lives, Harold Camping revised his apocalyptic prophecy Monday, saying he was off by five months and the Earth actually will be obliterated on Oct. 21.

Camping, who predicted that 200 million Christians would be taken to heaven Saturday before global cataclysm struck the planet, said he felt so terrible when his doomsday message did not come true that he left home and took refuge in a motel with his wife. His independent ministry, Family Radio International, spent millions -- some of it from donations made by followers -- on more than 5,000 billboards and 20 RVs plastered with the Judgment Day message.

Follower Jeff Hopkins also spent a good deal of his own retirement savings on gas money to power his car so people would see its ominous lighted sign showcasing Camping's May 21 warning. As the appointed day drew nearer, Hopkins started making the 100-mile round trip from Long Island to New York City twice a day, spending at least $15 on gas each trip.

"I've been mocked and scoffed and cursed at and I've been through a lot with this lighted sign on top of my car," said Hopkins, 52, a former television producer who lives in Great River, NY. "I was doing what I've been instructed to do through the Bible, but now I've been stymied. It's like getting slapped in the face."

Camping, who made a special appearance before the press at the Oakland headquarters of the media empire Monday evening, apologized for not having the dates "worked out as accurately as I could have."

Through chatting with a friend over what he acknowledged was a very difficult weekend, it dawned on him that instead of the biblical Rapture in which the faithful would be swept up to the heavens, May 21 had instead been a "spiritual" Judgment Day, which places the entire world under Christ's judgment, he said.

The globe will be completely destroyed in five months, he said, when the apocalypse comes. But because God's judgment and salvation were completed on Saturday, there's no point in continuing to warn people about it, so his network will now just play Christian music and programs until the final end on Oct. 21.

"We've always said May 21 was the day, but we didn't understand altogether the spiritual meaning," he said. "The fact is there is only one kind of people who will ascend into heaven ... if God has saved them they're going to be caught up."

It's not the first time the 89-year-old retired civil engineer has been dismissed by the Christian mainstream and has been forced to explain when his prediction didn't come to pass. Camping also prophesied the Apocalypse would come in 1994, but said later that didn't happen then because of a mathematical error.

Monday, rather than give his normal daily broadcast, Camping took questions as a part of his show, "Open Forum," which transmits his biblical interpretations via the group's radio stations, TV channels, satellite broadcasts and website.

Camping's hands shook slightly as he pinned his microphone to his lapel, and as he clutched a worn Bible he spoke in a quivery monotone about some listeners' earthly concerns after giving away possessions in expectation of the Rapture.

Family Radio would never tell anyone what they should do with their belongings, and those who had fewer would cope, Camping said.

But he also said that he wouldn't give away all his possessions ahead of Oct 21.

"I still have to live in a house, I still have to drive a car," he said. "What would be the value of that? If it is Judgment Day why would I give it away?"

Apocalyptic thinking has always been part of American religious life and popular culture. Teachings about the end of the world vary dramatically -- even within faith traditions -- about how they will occur.

Still, the overwhelming majority of Christians reject the idea that the exact date or time of Jesus' return can be predicted.

Tim LaHaye, co-author of the best-selling "Left Behind" novels about the end times, recently called Camping's prediction "not only bizarre but 100 percent wrong!" He cited the Bible verse Matthew 24:36, "but about that day or hour no one knows" except God.

"While it may be in the near future, many signs of our times certainly indicate so, but anyone who thinks they 'know' the day and the hour is flat out wrong," LaHaye wrote on his website, leftbehind.com.

Signs of disappointment also were evident online, where groups that had confidently predicted the Rapture -- and, in some cases, had spent money to help spread the word through advertisements -- took tentative steps to re-establish Internet presences in the face of widespread mockery.

The Pennsylvania-based group eBible Fellowship still has a website with images of May 21 billboards all over the world, but its Twitter feed has changed over from the increasingly confident predictions before the date to circumspect Bible verses that seem to speak to the confusion and hurt many members likely feel.

Camping offered no clues about Family Radio's finances Monday, saying he could not estimate how much had been spent on getting out his prediction nor how much money the nonprofit had taken in as a result. In 2009, the nonprofit reported in IRS filings that it received $18.3 million in donations, and had assets of more than $104 million, including $34 million in stocks or other publicly traded securities.

Josh Ocasion, who works the teleprompter during Camping's live broadcasts in the group's threadbare studio sandwiched between an auto shop and a palm reader's business, said he enjoyed the production work but he had never fully believed the May 21 prophecy would come true.

"I thought he would show some more human decency in admitting he made a mistake," he said. "We didn't really see that."