But why were two planes set on a collision course to begin with? Brazil's air traffic control system comes up short 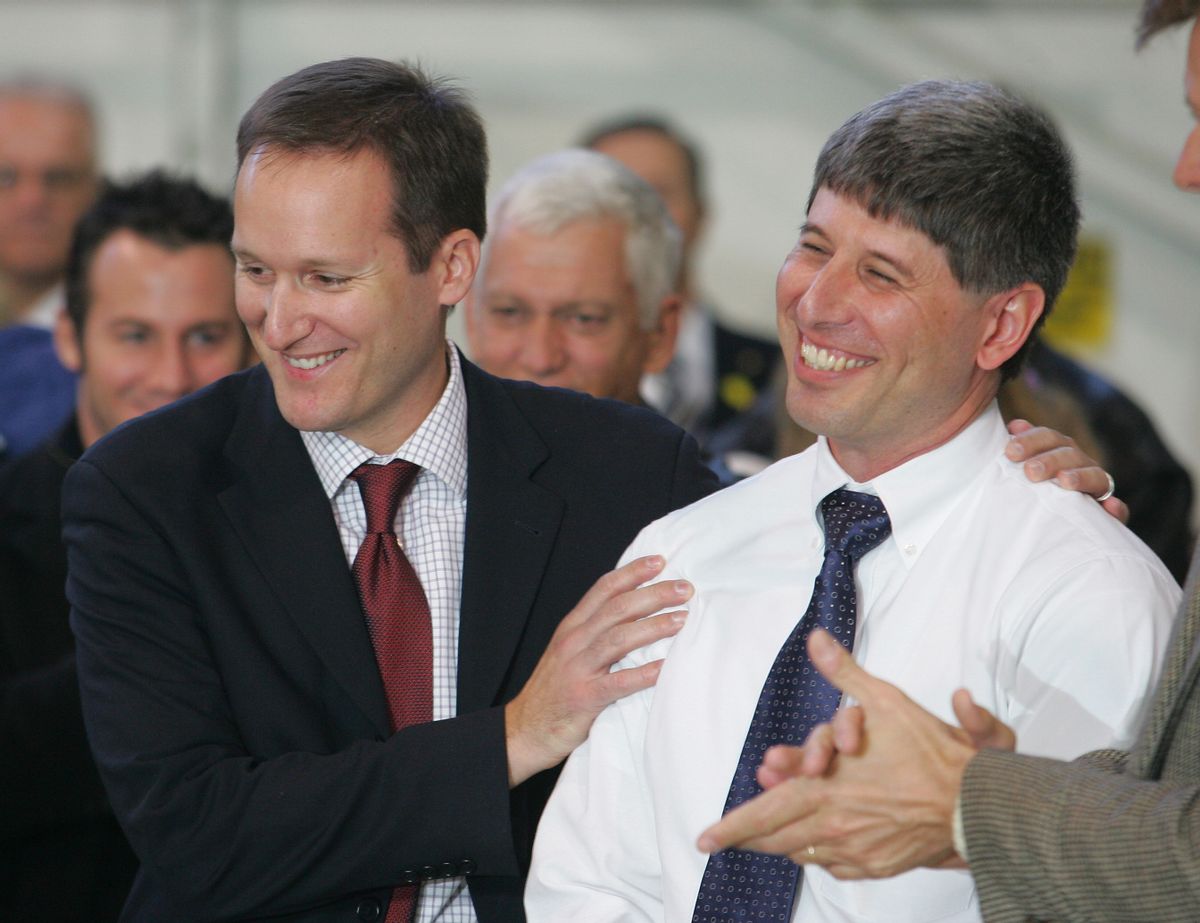 **FILE**Jan Paladino, left, and Joseph Lepore, both U.S. pilots who were detained in Brazil for more than two months following a midair collision that killed 154 people, are greeted by friends and family upon returning to Long Island MacArthur Airport in Ronkonkoma, N.Y, in this Dec. 9, 2006 file photo. Paladino and Lepore, indicted in June, 2007, by a Brazilian judge, are willing to testify in the case, but will not return next week to Brazil to do so, their American lawyer said Thursday, Aug. 23, 2007. (AP Photo/Ed Betz, File) (Ed Betz)
--

In Brazil last week, a judge handed down 52-month jail sentences to Joe Lepore and Jan Paladino, the two U.S. pilots of a Legacy executive jet that collided mid-flight with a Gol Airlines 737 over Brazil five years ago. The Brazilian-built Legacy survived the crash, limping to an emergency landing at a military base. The 737 plummeted into the Amazon jungle killing all 154 people on board. Brazil says the pilots may substitute community service for actual time in prison, but also ruled that the men's Federal Aviation Administration pilot certificates be revoked.

Brazilian authorities maintain that Lepore and Paladino had -- inadvertently or otherwise -- switched off their jet's transponder, in turn rendering an anti-collision alarm, called TCAS, inoperative as well. The two pilots deny this, though pilots of the commercial variant of the Legacy have noted that the location of transponder controls makes accidental shut-offs relatively easy. This could explain why neither crew received a TCAS warning as the planes closed in on each other.

What it does not explain, however, is how and why the flights were put, and left, on a collision course to begin with. Press reports of the ruling have focused almost exclusively on the charges against Lepore and Paladino, neglecting to mention the fact that Brazilian air traffic control was also held accountable. Controller Lucivando Tiburcio de Alencar was sentenced to 40 months in prison for incompetence.

Shortly after the accident, representatives of the Montreal-based International Federation of Air Traffic Controllers' Associations visited the ATC facility in whose airspace the collision occurred. In a prepared statement, IFATCA officials said they were "very much surprised" by what they saw there, describing ATC equipment and protocols as poorly designed and unsafe. An investigation by the U.S. National Transportation Safety Board later cited faulty air traffic control protocols as the primary cause of the catastrophe.

Brazilian ATC, which is administered by the country's air force, has been under intense scrutiny ever since. Have things improved? Not according to a confidential report obtained by the Brazilian newsweekly Epoca, which highlights continued deficiencies in training and procedures. Controllers are undertrained and overworked, the report cites. "There have been improvements in relation to 2006," said Edleuzo Cavalcante, president of the Brazilian Association of Air Traffic Controllers. "But today's air traffic is more complex. We have a stage that is set for the occurrence of new problems."

For what it's worth, I have flown through Brazilian airspace many times. The quality of ATC around big cities like Rio or São Paulo feels little different from what you'll find in Europe or the United States. Over remote areas, however, it's more challenging. Amazonica Control is the agency in charge of most airspace over the immense Amazon basin. Here, radar coverage is sometimes unreliable and controllers can be difficult to reach, often sounding as if they're talking through a tin can and string. Confirming even simple instructions can take multiple attempts.

Generally these problems are more of an inconvenience than a danger. VHF voice communications are always troublesome in remote areas (this is one of the reasons they don't exist when flying over oceans), and I have never felt that conditions over Brazil were unsafe. If they were anything close to unsafe, the many daily flights operated by American, European, Middle Eastern and Latin American airlines wouldn't be going there. Some 10,000 people pass through Brazilian airspace each day aboard U.S.-registered jetliners alone.

At the same time, no, Brazil's ATC system is not as good as it should be. Neither, in many people's opinions, are the country's authorities being honest about the 2006 collision.

Joe Lepore and Jan Paladino were released from Brazilian custody two months after the accident and were tried in absentia. It is doubtful that U.S. authorities will enforce the rulings against them. Many aviation experts have harshly criticized the crash investigation, and few would consider the verdicts fair.

"I was gratified to see that the judge acquitted the pilots on the most egregious of the half-dozen manifestly false charges," says New York Times correspondent Joe Sharkey. Sharkey was a passenger on the Legacy jet when it impacted the 737. "As the judge clearly ruled, Brazilian ATC erred in putting both planes on a collision course at 37,000 feet, and the American pilots were correctly following ATC instructions Otherwise, the verdict reflected the gross travesty of justice and the underlying anti-American hysteria in Brazil that have characterized this horrific case since day one. As the U.S. National Transportation Safety Board said in its investigation, operational and systemic errors in Brazilian air traffic control were the probable cause of this disaster."

Sharkey has been openly critical of the investigation, and at one point faced a sham lawsuit filed by a relative of one of the victims, accusing him of defaming the nation of Brazil.

"It has been a personal nightmare since that awful afternoon 37,000 feet over the Amazon," Sharkey adds. "For the American pilots who stand unjustly convicted of criminal acts, the nightmare has been just unspeakable. It's an axiom in aviation law that you do not rush to criminalize an aviation disaster, and this awful case, which has been a disgrace to Brazil, is the perfect example of why."

For more on this accident, and the growing phenomenon of criminal prosecutions against pilots, see this December 2006 column.