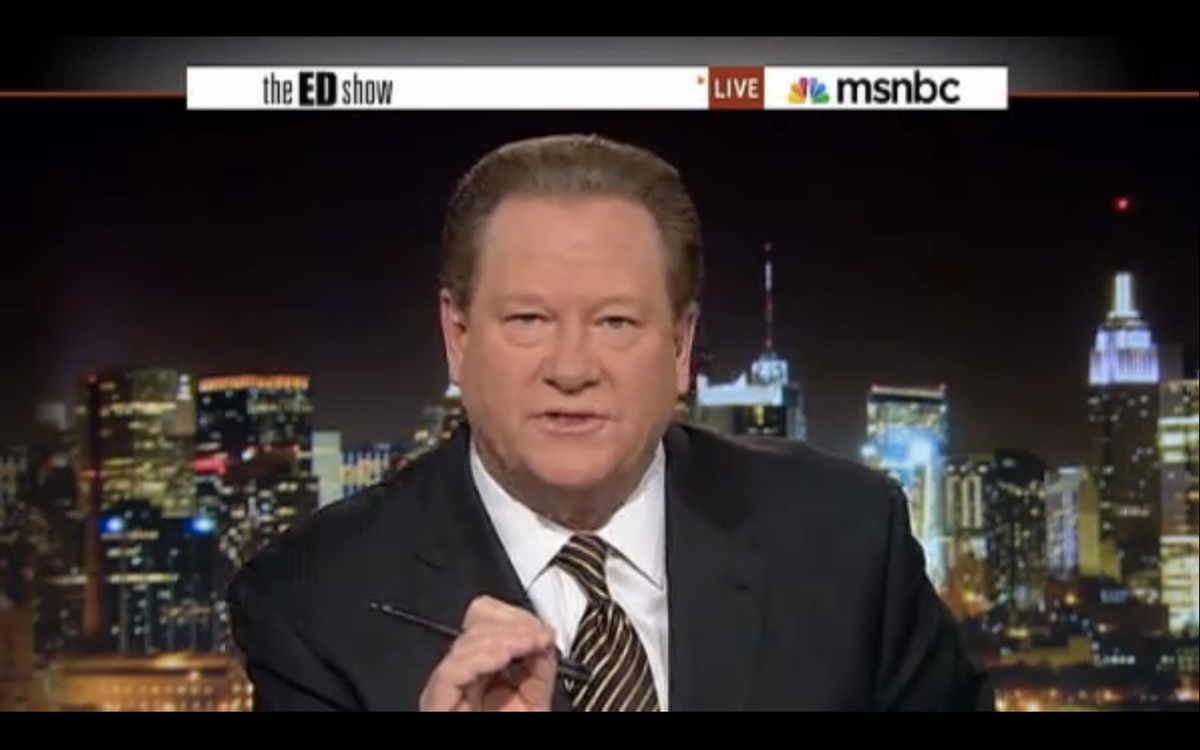 (updated below with details of Schultz's Wednesday night apology)

Launching into an attack on President Obama's conservative critics during his radio show on Tuesday, Schultz thundered:

"President Obama is going to be visiting Joplin, Mo., on Sunday, but you know what they're talking about, like this right-wing slut, what's her name?, Laura Ingraham? Yeah, she's a talk slut. You see, she was, back in the day, praising President Reagan when he was drinking a beer overseas. But now that Obama's doing it, they're working him over."

[via TPM and The Radio Equalizer]

The conservative Daily Caller site first reported the remarks, but Schultz is taking heat from both the left and the right. Alyssa Rosenberg at Think Progress, for instance, quickly condemned the slur and called for an apology:

"Schultz's crass remarks about Ingraham were an ineffective way to make an important point. For a leading progressive commentator, they're unacceptable. Ed Schultz, who has criticized conservatives for their sexism, should apologize to Laura Ingraham on his show tonight."

Ingraham herself told the Caller in an email on Wednesday:

“The crude comments made about me by Ed Schultz on his radio program: First, I was surprised to learn that Ed Schultz actually hosted a radio show. Is it only available online? Second, I have to get back to recording the audio edition of my new book ‘Of Thee I Zing.’ Now I’m tempted to insert one additional zing–about men who preach civility but practice misogyny.”

This is not the first time Schultz has stepped into controversy lately. Last summer, according to the New York Post's Page Six gossip sheet, he erupted in MSNBC's newsroom and threatened "to torch this f------- place" after being informed that he wouldn't be included in some promotional spots for the network.

More recently, he declared in the wake of Osama bin Laden's killing that "the intellectual liberal hand-wringing needs to stop in this country" and that progressives were wrong to raise questions about the circumstances of the terrorist leader's assassination. That earned Schultz a fierce rebuke from his former MSNBC colleague Keith Olbermann. Salon's David Sirota also criticized Schultz for the comment, prompting Schultz to phone in to Sirota's radio show and to tell him to "go to hell."

Salon's Justin Elliott has noted that Schultz, a one-time conservative talk radio host in North Dakota, has a tendency to fall back on his right-wing past.

Jonathan Easley assisted with this story.

MSNBC management met with Ed Schultz this afternoon and accepted his offer to take one week of unpaid leave for the remarks he made yesterday on his radio program. Ed will address these remarks on his show tonight, and immediately following begin his leave. Remarks of this nature are unacceptable and will not be tolerated.

Schultz himself went on the air for about three and a half minutes at the beginning of his normal 10 pm slot to make a formal apology. His statement was rambling and emotional; at several points, the host even appeared to be on the verge of tears. He began:

"On my radio show yesterday, I used vile and inappropriate language when talking about talk show host Laura Ingraham. I am deeply sorry, and I apologize. It was wrong, uncalled for, and I recognise the severity of what I said. I apologize to you, Laura, and ask for your forgiveness.

Clearly upset by the reaction his comments have received, he did not limit the scope of his apology to the immediate situation, reaching more widely to draw in his roles as parent and family man:

"My wife is a wonderful woman, and we have a wonderful family, and with six kids and eight grandkids, I try to set an example. In this moment I have failed. And I want you to know that I talk to my sons especially about character about dignity and about the truth. And I tell you the truth tonight that I am deeply sorry and I tell them every day that they have to live up to standards if they want to be a successful human being in life. And I have let them down."

Acknowledging bombastic outbursts in his past (see above for examples), he added: "I have made a lot of mistakes; this is the lowest of low for me."