Last night's fluffy episode was a love letter to Manhattan, stardom and youth 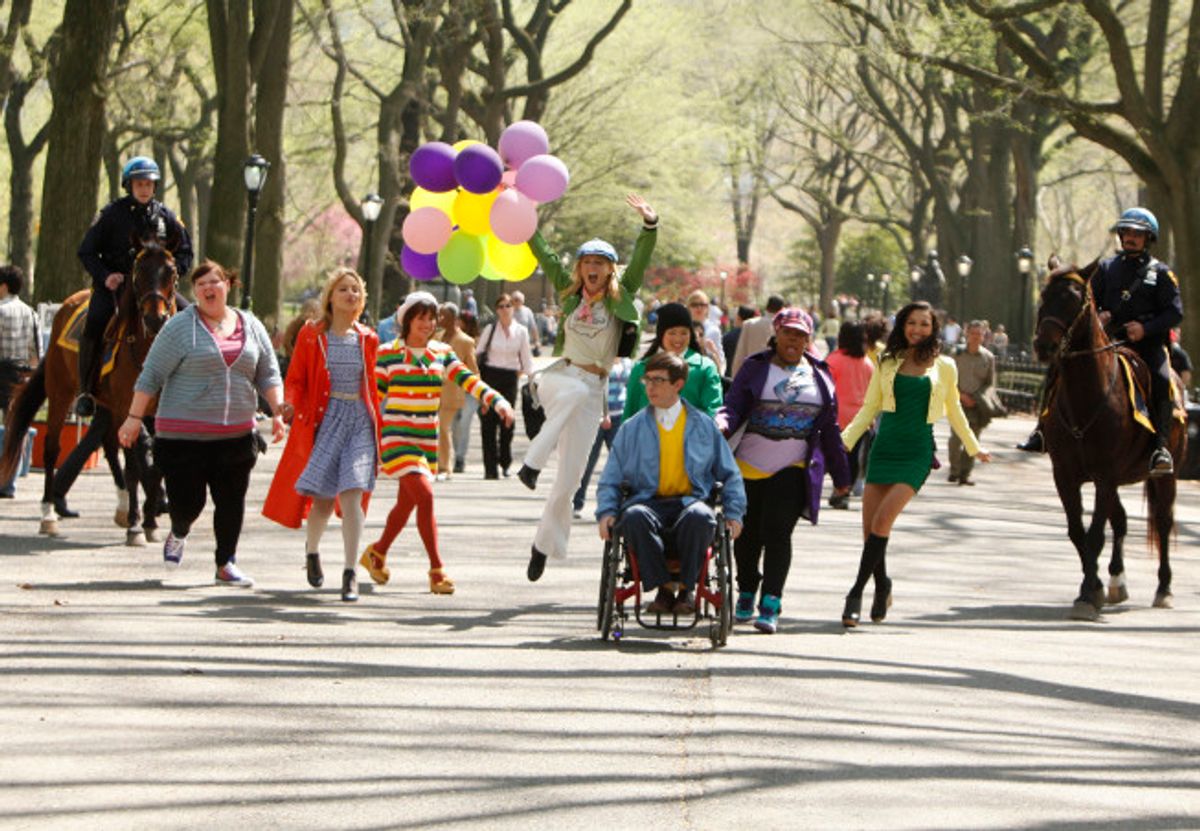 The second season finale of "Glee" was utterly charming even though it was dramatically flabby. Series co-executive producer Brad Falchuk wrote and directed. The plotting was strictly from hunger until that moment when New Directions gathered in the hall to see if they made the top 10, and you instinctively realized that they didn't, because if they had, the scene wouldn't be happening eight minutes from the end of the season's last episode.  Beyond that, the episode was about two things, both only tangentially related to the plot.

One was the unique experience of being a cast member on "Glee," which is probably the closest modern equivalent to Beatlemania. The brain-frazzling uniqueness of that experience  might account for the innocent intensity of the performances. Even when the material stinks, the cast members never seem to be phoning it in -- not even when they're stuck on the margins of a chorus line during someone else's solo. And they perform the romantic scenes with a circa-1955 intensity that would be laughable if it weren't so refreshing. Finn's plea to Rachel, "Take a chance on me," was a genuinely romantic moment, even with three classmates standing behind him crooning "Bella Notte" from "Lady and the Tramp." And Brittany's final speech to Santana by the lockers was sweet, too. That character could never compose such sentences, but Heather Morris' unaffected delivery made me believe them.

The episode's other subject was the adoration that musical theater buffs -- and a good many moviegoers -- feel for New York City. The opening tribute to Woody Allen's "Manhattan" panned slowly around Times Square to George Gershwin's "Rhapsody in Blue," then settled on Rachel staring up at the signage like some 1930s movie hayseed. (She should have been carrying a battered old suitcase with stickers on it.) New Directions romped through Manhattan landmarks (Lincoln Center! Washington Square Park!) in an homage to "On the Town." Kurt and Rachel had their own breakfast at Tiffany's while "Moon River" played softly in the background, then did a "Wicked" number on the show's empty stage. (They're not in Ohio anymore.) Rachel said she was moving to New York after graduation: "This is where I belong." Kurt: "I am so coming, too."

These characters were drunk on the city, and on the cinematic image of the city. The fact that they were in town to compete seemed mostly lost on them -- and on their teacher, Will Schuester, who (sort of) realized his dream of singing on a Broadway stage, yet failed to generate a stash of decent original songs before arriving in New York and had the kids writing stuff on the fly. (Will is the "Glee" of musical theater teachers: mostly a mess, with flashes of brilliance.)

Was the episode's bittersweet conclusion cosmic payback for New Directions' failure to take the contest seriously? It seemed that way. Not that I expect long-term consequences from Will's distracted incompetence or his students' scatterbrained tourist mentality; "Glee" is a Big Moments show that's not too interested in follow-through. Nevertheless, I liked that a bill came due.  This defeat turns New Directions into true underdogs again, and raises the stakes for next season. It also pays off this episode's Rachel subplot, which was about the importance of artists forgiving themselves for loving their work more than anything (or anyone) else.

Rachel was right to walk away from Finn on that West Village street. She was there to do a job. She understood that. Then Finn convinced her to unlearn it, to everyone's detriment. The spontaneous onstage kiss that lost the contest for New Directions was just the most outward manifestation of the students' misplaced priorities, and their teacher's failure of leadership. The plethora of reconciliations (Brittany and Santana), declarations  (Kurt and Blaine) and surprise hookups (Mercedes and Sam) suggests that the main characters have yet to learn their lesson -- and maybe won't, because they're too busy being teenagers. (Mentally, Will is a teenager, too.)

But really, now. There's no point pretending that "Glee" thinks about its characters in terms of real world psychology. They're paper dolls with pulses.  The show's plots and subplots are elaborate (often strained) setups for musical numbers, or hamfisted embellishments of a Big Theme. And yet the show's prankish confidence says, "Keep watching, greatness might be right around the corner" -- and sure enough, sometimes it is. Throughout, the cast's enthusiasm never flags. "Glee" communicates a sense of joy that's rare on TV -- so rare that it makes me inclined to forgive it almost anything.

"There's no orchestra," Rachel tells Kurt, standing on the empty stage of "Wicked."