So this is what GOP overreach produces

Democrats score a special election triumph in a solidly Republican district. What a difference six months can make 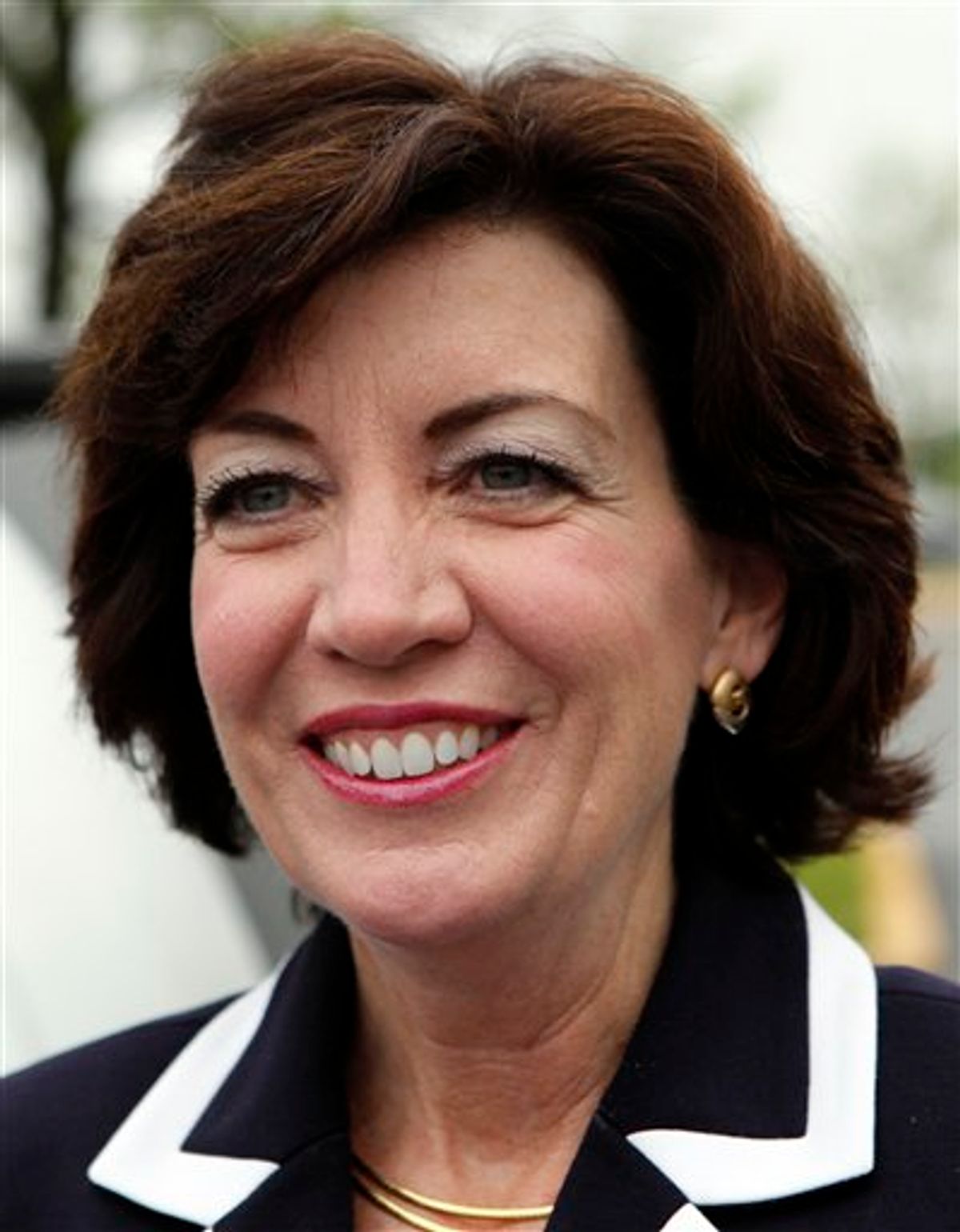 Democratic candidate for the 26th District Congressional seat, Kathy Hochul arrives at a campaign stop at a restaurant in Amherst, N.Y., Tuesday, May 24, 2011. Hochul is running against Republican Jane Corwin and tea party candidate Jack Davis in the race to succeed Republican Chris Lee. Lee resigned in February after shirtless photos surfaced that he'd sent to a woman on Craigslist. (AP Photo/David Duprey) (AP)
--

Let’s start by getting all of the caveats out of the way about misinterpreting the results of the special House election that Democrat Kathy Hochul just won in Western New York.

There were local issues at work that mean nothing outside of the Buffalo area. There was a third candidate in the race -- a one-time Democrat who ran under the Tea Party banner -- whose presence probably hurt the Republican candidate, Jane Corwin, more than it hurt Hochul (although the disparity is probably not nearly as severe as Republicans will claim). And there was probably a basic difference in candidate quality: Hochul was easier to like and seemed to run a better campaign than Corwin.

All of these things are true, but none of them erase the single most significant message of Hochul’s victory: The backlash against Tea Party governance is real.

On paper, this race should not have been particularly close. Even in optimal political climates, Democrats have failed to net more than 48 percent of the vote in New York’s 26th District. John McCain still won the district by 6 points in 2008, even with the GOP label in disrepute across New York state. Given that the political climate now is far from optimal for Democrats, Corwin should have won this race by 10 points – and probably more. And rest assured, if the election had been held last November, she would have.

But something important has changed in the last six months. When they retook the House in their midterm landslide, Republicans ceased to be the default protest vehicle for voters. This was the role they played for all of 2009 and 2010, and it was easy. With Democrats running the White House and Congress and with economic anxiety soaring, all Republicans had to do was shake their heads and ask voters, "Is this the kind of change you can believe in?" They didn’t need a platform, they didn’t need strong candidates, and they didn’t need much money. In the climate of 2010, any generic Republican could win just about any competitive race.

But as the majority party in the House, Republicans need to present a platform. And because their base is so inflamed with anti-Obama hysteria and so insistent on absolute ideological purity, the Republicans running the House are constricted in the agenda they can pursue. In several high-profile GOP primaries in 2010, insufficiently pure Republican candidates were rejected by the base. Keeping this base from revolting again in 2012, Speaker John Boehner and his fellow Republicans realized when they took over, would be one of their main challenges -- something they’d have to do even if it meant taking some positions that aren’t popular with non-GOP voters.

This is where the plan to turn Medicare into a voucher program came from. Boehner brought it up for a vote last month and nearly every Republican in the House voted for it, while every Democrat opposed it. The idea, it seemed, was to get it out of the way early -- to take massive grief from Democrats and senior groups early in the congressional term in an effort to demonstrate purity to the GOP base, then to hope that it would all be a distant memory to swing voters by November 2012.

The least we can after Tuesday’s result, though, is that it’s not a distant memory to swing voters now. Hochul made the Medicare plan (which Corwin initially said she’d support) the heart of her campaign message. And the race played out as polls showed that the Tea Party itself was becoming severely unpopular with swing voters. The deeply unpopular Medicare plan was one of the reasons for this. In 2009 and 2010, most swing voters mainly saw the Tea Party as a movement opposed to Barack Obama’s policies. But now, with Republicans running the House (and numerous statehouses across the country) and pushing the Tea Party’s agenda, swing voters have come to see it as an extreme ideological movement. And there’s no better representation of that extremism than the Medicare plan.

Democrats will need 24 more victories like the one they achieved Tuesday night to take back the House next year. It’s a tall order. Even in their landslide reelection years, Richard Nixon and Ronald Reagan had very small coattails -- and no one thinks Obama is on course for a Nixon/Reagan-like landslide in 2012. Still, the fact that they could win in a solidly Republican district just a few months after their worst defeats in decades has got to be an enormous boost for Democrats.

And it’s a reminder to everyone that, just like it changed dramatically after Obama’s win in 2008, the political climate has again shifted in the wake of the GOP’s 2010 landslide. Suddenly, swing voters have something else to vote against besides President Obama.