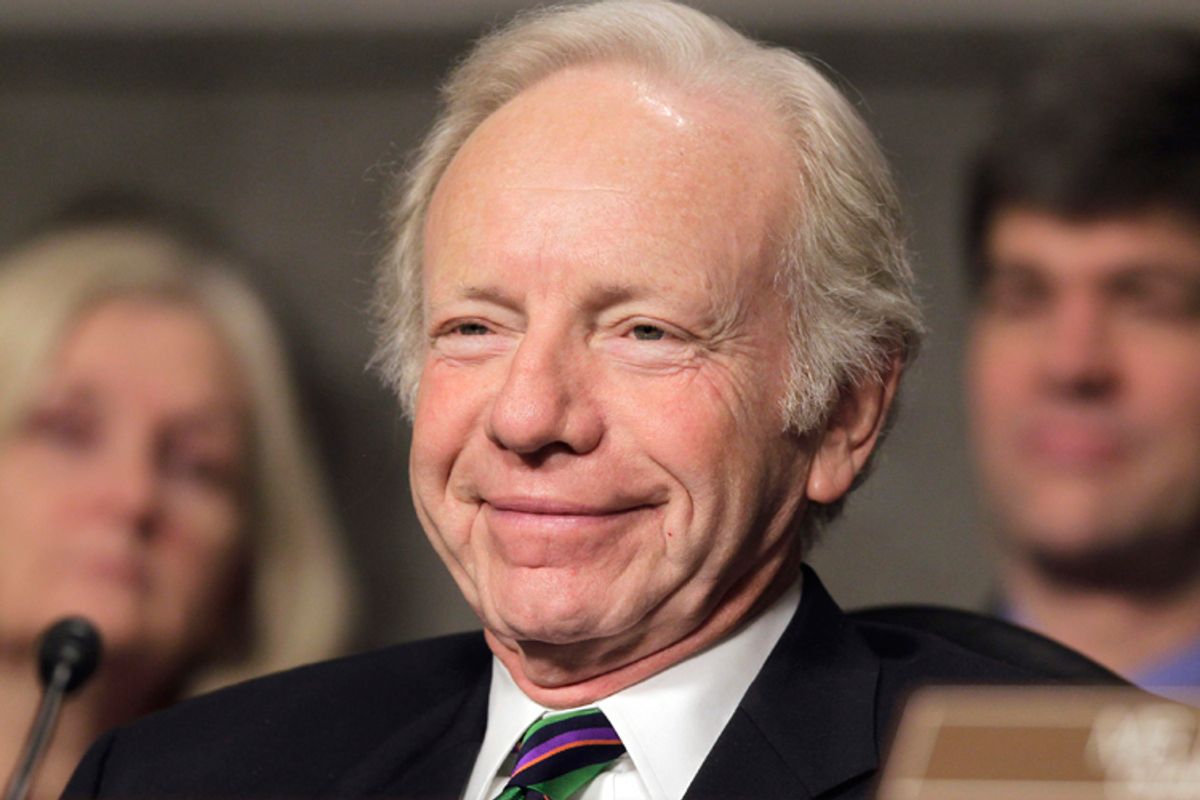 In a cringe-inducing Politico story about how outgoing Senator Joe Liberman is working on this "legacy" by befriending freshmen Republican senators, we learn a lot about the Washington establishment classifies reckless and irresponsible foreign policy ideas. (Hint: They do not use the words "reckless and irresponsible," except when talking about liberals who don't want to bomb people.)

Lieberman's actual political beliefs are best described as "incoherent" or "pure pettiness incarnate," but his foreign policy ideas are actually pretty easy to summarize: Constant war everywhere. This is how he describes that philosophy:

“There’s no question that, for me, it’s very reassuring to see people coming in who are in tune with the kind of foreign policy that’s based on human rights, democracy promotion, muscular foreign policy and being willing to use our military strength when we’ve had to protect our security and our freedom,” Lieberman, a Connecticut independent, told POLITICO.

Muscular! Strength! Security! Freedom! (And "human rights," unless you are a Guantanamo detainee.)

“Presidents, congressmen and senators all worry about their legacy, and he’s thinking of his place in history as a person who was willing to reach out to both sides. He wants his legacy to be a strong, serious, realistic foreign policy,” said Robert Guttman, founder and director of Johns Hopkins University’s Center on Politics and Foreign Relations, who hosted Lieberman at his school last year.

Strong! Serious! Realistic! Those words have such fungible meanings, apparently! A completely unsustainable and expensive foreign policy based around open-ended occupations of nations full of people learning new reasons to hate us every day is a "realistic" foreign policy, because it involves bombs and troops and stuff. A vision of American power backed up by belligerent threats to preemptively begin shooting wars is "serious."

At some point, a liberal is quoted, in order to make the argument that supporting the Iraq war was a bad thing, because it led to thousands of people dying for no good reason, but then we are back to marveling at how "bipartisan" Lieberman is, because his new best friend is Republican Senator Kelly Ayotte:

“It’s a testament to who he is,” said Ayotte, who has bonded with Lieberman over their common backgrounds as former state attorneys general. “He’s certainly someone who’s been a strong, independent voice here; and particularly on national security issues, he recognizes those issues go beyond parties.”

Strong again! Bombing Iran is such a strong, independent idea. Thank god Joe Lieberman is passing on his seriousness to a new generation of serious, realistic thinkers.