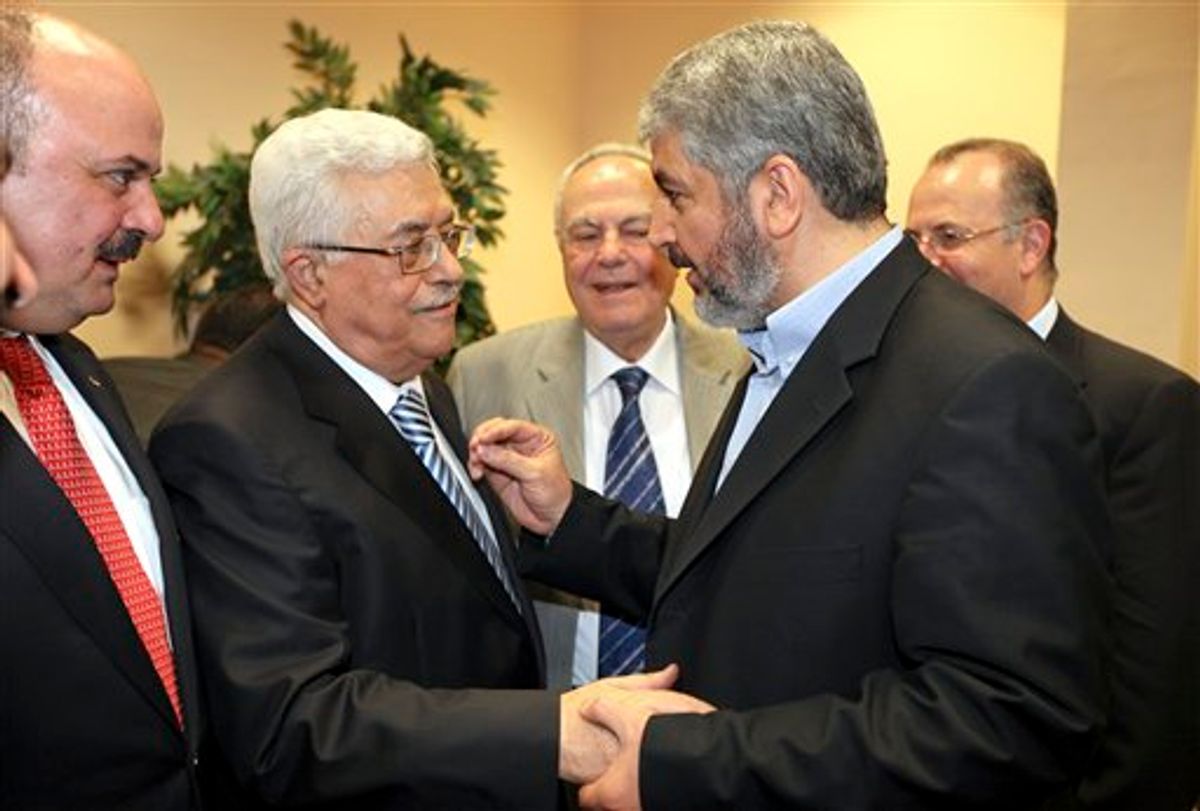 In this photo released by the Hamas Media Office, Palestinian President Mahmoud Abbas, center-left, and Hamas leader Khaled Mashaal, center-right, shake hands at a ceremony in Cairo, Egypt Wednesday, May 4, 2011. Rival Palestinian factions Fatah and Hamas on Wednesday proclaimed a landmark, Egyptian-mediated reconciliation pact aimed at ending their bitter four-year rift, at a declaration ceremony in the Egyptian capital Cairo. (AP Photo/Hamas Media Office) ** EDITORIAL USE ONLY, NO SALES ** (AP)
--

Palestinian President Mahmoud Abbas on Wednesday dismissed Benjamin Netanyahu's outline of a peace deal as a non-starter and said he's now setting his sights on U.N. recognition of a Palestinian state in the fall -- unless the Israeli prime minister softens his stance before then.

Despite strong U.S. objections, the Palestinians are counting on growing international support for bypassing Israel en route to statehood, saying Netanyahu's speech to the U.S. Congress on Tuesday showed he is not a partner for peace.

However, Palestinian leaders also want to avoid being blamed for the failure of U.S. mediation efforts, especially after President Barack Obama met a key Palestinian demand last week when he said border talks should be based on the pre-1967 war lines, with mutually agreed land swaps.

In an apparent attempt to show good faith, Palestinian officials said Wednesday they would ask the U.N. Security Council and the Quartet of Mideast mediators -- the U.S., the U.N., Europe and Russia -- to call for renewed negotiations based on Obama's border proposals with a September deadline for a deal.

But Netanyahu has rejected the 1967 lines as a starting point, and it's unlikely talks would get off the ground.

He told Congress that while he is willing to make "generous" land concessions, Israel must keep east Jerusalem and other key areas it captured in the 1967 Mideast war. The Palestinians insist on a capital in east Jerusalem -- home to key Muslim, Jewish and Christian holy sites.

Netanyahu also said Abbas must tear up his reconciliation deal with the Islamic militant Hamas before any negotiations can begin. Abbas has said that he -- not Hamas, which refuses to recognize Israel -- would determine Palestinian negotiating positions. Hamas wrested Gaza from Abbas in a violent 2007 takeover.

After his return to Israel on Wednesday, Netanyahu said he encountered strong support for his positions in the U.S. and called on the Palestinians "to recognize the justified demands of Israel."

Netanyahu's speech was filled with "falsehoods and distortions," Abbas told leaders of the Palestine Liberation Organization and his Fatah movement. "He did not say anything we can build on positively."

Abbas will meet over the weekend with Arab League representatives in Qatar to discuss the next steps.

Obama has said a Palestinian state should arise from negotiations, not a U.N. vote. The U.S. will likely veto a request to the Security Council to accept the state of Palestine as a full member of the world body.

Abbas said Wednesday that negotiations remain his first choice, but that if that option is closed, "we are going to go to the option of (U.N. recognition in) September."

Currently, Palestine has U.N. observer status as an "entity," and Palestinian officials said they may go for the lesser option, of having Palestine recognized by the U.N. General Assembly as a non-member observer state if a U.S. veto derails the full membership bid.

The General Assembly vote requires support from at least two-thirds of the 192 U.N. member states. Palestinan Foreign Minister Riad Malki said Wednesday he believes the Palestinians are assured of such a majority.

In Israel, reaction to Netanyahu's speech was mixed.

In other developments Wednesday, Egypt announced that it will open its only crossing with the Gaza Strip this weekend, significantly easing a four-year blockade on the Hamas-ruled territory but setting up a potential conflict with Israel.

Hamas officials said they had not been notified of the change, and declined comment.