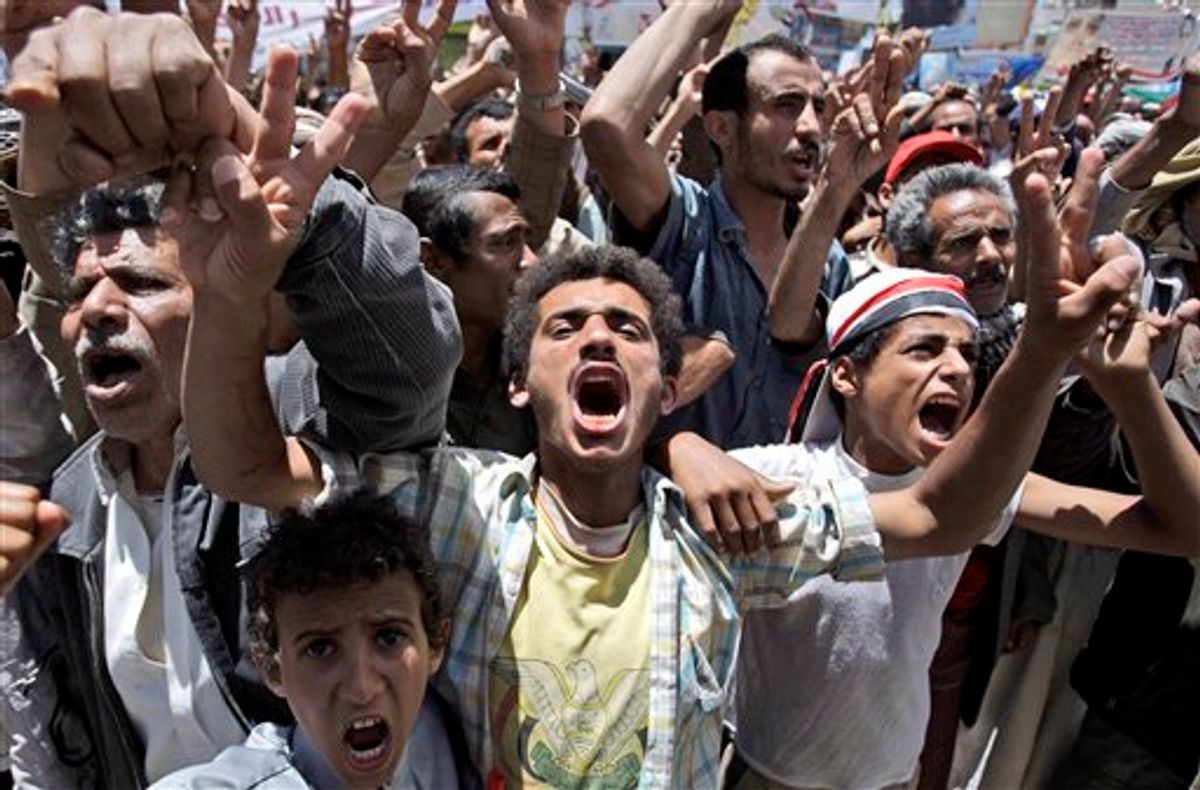 Anti-government protestors react during a demonstration demanding the resignation of Yemeni President Ali Abdullah Saleh, in Sanaa, Yemen, Tuesday, May 24, 2011. Fighters for Yemen's largest tribe sealed off key government buildings and barricaded streets in the heart of the capital Tuesday as the revolt against President Ali Abdullah Saleh sharply escalated after militiamen turned their guns against government forces. (AP Photo/Hani Mohammed) (AP)
--

Yemen's embattled President Ali Abdullah Saleh issued messages of hard-line defiance Wednesday even as intense battles raged in the heart of the capital for a third day, saying he will not step down or allow the country to become a "failed state."

Saleh's sharp response -- read by his spokesman -- suggested he was prepared to escalate the fight against powerful opposition tribes that have been locked in urban combat with government forces since Monday. The clashes have left at least 41 dead and dozens badly injured.

He also took a direct swipe at U.S.-backed efforts to negotiate his exit. "I don't take orders from outside," said the statement read by the spokesman in a meeting with tribal allies.

"Yemen will not be a failed state. It will not turn to al-Qaida refuge," the statement added in another stab at Western fears that chaos in Yemen would open the door for an al-Qaida offshoot to expand its operations. The Yemen-based cell, al-Qaida in the Arabian Peninsula, is linked to the attempted Christmas Day 2009 bombing of an airline over Detroit and explosives found in parcels intercepted last year in Dubai and Britain.

Despite his tough talk, Saleh's statement also promised he would try to keep the latest violence from "dragging the country into a civil war."

The clashes began Monday after Saleh's troops tried to storm the compound of the head of Yemen's largest tribe, the Hashid. Hundreds of tribal fighters then responded with fierce attacks on government forces.

The battles have ravaged the capital's central Hassaba district, which contains government offices and the headquarters of Saleh's ruling party. The tribal fighters have occupied several government buildings while Saleh's forces have used the interior ministry as their front-line base.

Some military units also appear to have broken ranks and joined the opposition. One breakaway unit trucked in stones to block streets in attempts to prevent government troops from moving in heavy weapons. Pro-Saleh forces, meanwhile, set up checkpoints in other areas, witnesses said.

Thousands of protesters also marched into the main square in Sanaa under the protection of militiamen allied with al-Ahmar.

Video on the Al-Jazeera network showed destroyed walls and ceilings in one of al-Ahmar's houses while the injured, many in traditional Yemeni dress and others in military-style uniforms, were rushed to a field clinic.

An Associated Press reporter saw dozens of families packing up and fleeing the Hassaba district for safety outside the capital. Meanwhile, eyewitnesses said that all incoming access to Sanaa was blocked by pro-government Republican Guards, which are under the command of Saleh's son, leaving hundreds of Yemenis trying to enter the capital stranded and forced to spend the night in their cars.

The fighting also appears to be widening into nearby neighborhoods. Volleys of mortars hit an army unit that had defected to the opposition side in the district of al-Nahda, killing three and injuring 10 others, according to a military official.

The official spoke on condition of anonymity because he isn't authorized to talk to the media.