Never mind Medicare. What about the economy?

Unemployment, not Paul Ryan's budget, will decide the 2012 election. And on that front, the latest news isn't good 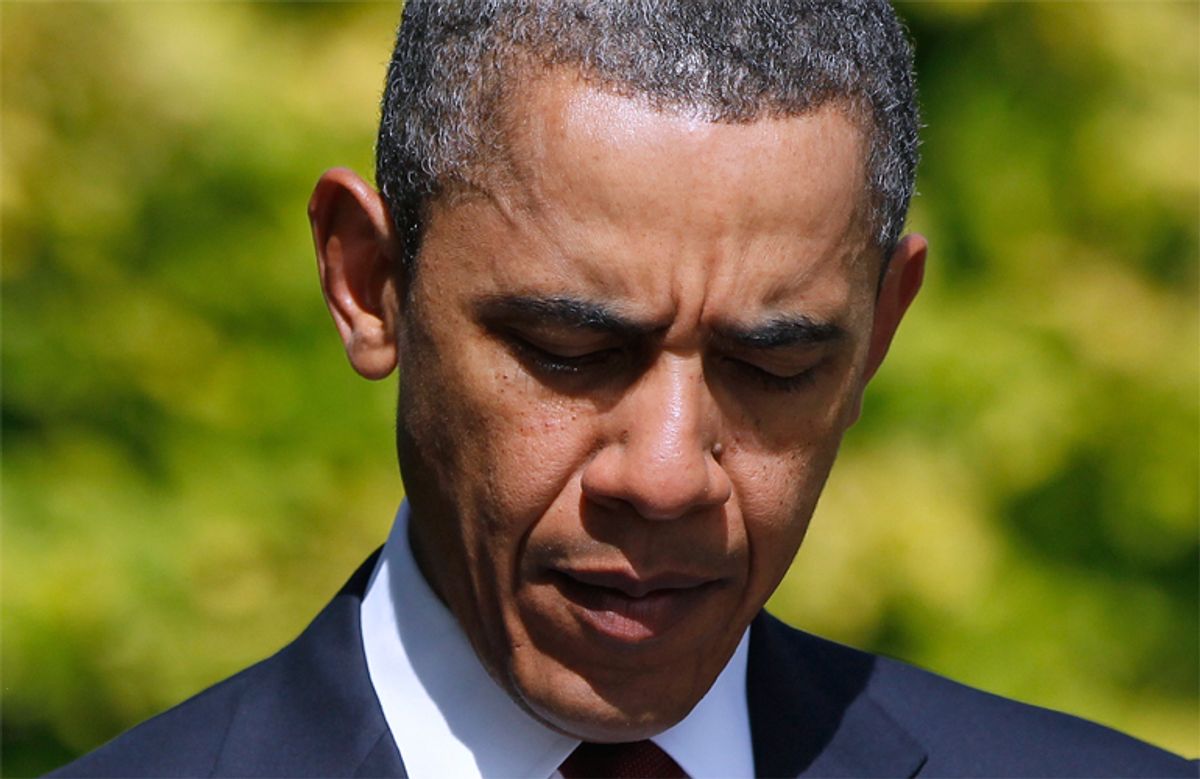 Democrats are feeling chuffed today. The ongoing travails of the bumbling field of Republican presidential candidates have provided much recent amusement, but Kathy Hochul's victory in a special election in a Republican-dominated New York congressional district is a bigger deal: apparent solid proof that Paul Ryan's Medicare plan was a disastrous strategic error for the GOP. We're going to hear a lot more about Medicare in the months ahead, even as Republicans kick and scream about unfair "demagoguery" -- the very same Republicans who spent their 2010 campaign attacking the Affordable Care Act for its cuts to Medicare. It would be funny if wasn't so pathetic.

Also today, fears of a debt ceiling disaster are temporarily subsiding as news trickles out that negotiations between a team led by Vice President Biden and the Republican congressional leadership may be on their way to hammering out $1 trillion worth of spending cuts over the next 10 years in exchange for an agreement to lift the debt ceiling. We'll file that one in the won't-believe-it-until-I-see-it category, but if true, the news will undoubtedly further feed Democratic complacency. If Obama can neutralize the deficit and Medicare as political issues, he's got a big leg up for 2012.

But before we start placing bets on whether Democrats have a chance of retaking the House in 2012, we might want to ask ourselves: Are we forgetting something? Is anyone in Washington paying attention to the economy?

When GDP growth faltered in the first quarter of 2011, the consensus view of economists was that the numbers were an aberration -- growth was already supposed to be picking up in March, and estimates for second quarter GDP growth were rosy. But that's not how things appear to be playing out. Regional surveys released in May unanimously reported a manufacturing slowdown. The housing sector is moribund. The four-week moving average of weekly jobless claims is at a six-month high. On Wednesday, the Department of Commerce reported that new orders for durable goods fell sharply in April. Also on Wednesday, the private economic forecasting firm Macro Advisers downgraded its estimate for second-quarter economic growth.

We're not talking double-dip recession yet, but the warning signs are too numerous to ignore. It's difficult to see how the modest gains in the labor market we've seen over the last six months can continue if jobless claims remain elevated and GDP growth continues to slacken.

But ignoring the problem is exactly what both the White House and Congress appear to be doing. There are absolutely no plans afoot to address unemployment or slowing economic growth. The notion that sharp cuts in spending will spur growth is absurd -- Europe's austerity binge offers the most obvious counter-example.

So let's hold off on the Medicare backslapping. If the economy is slumping when the 2012 campaign heats up, Medicare and the deficit will not be the deciding issues in how anyone votes. Ryan's budget will be long forgotten. And Obama will be a one-termer.