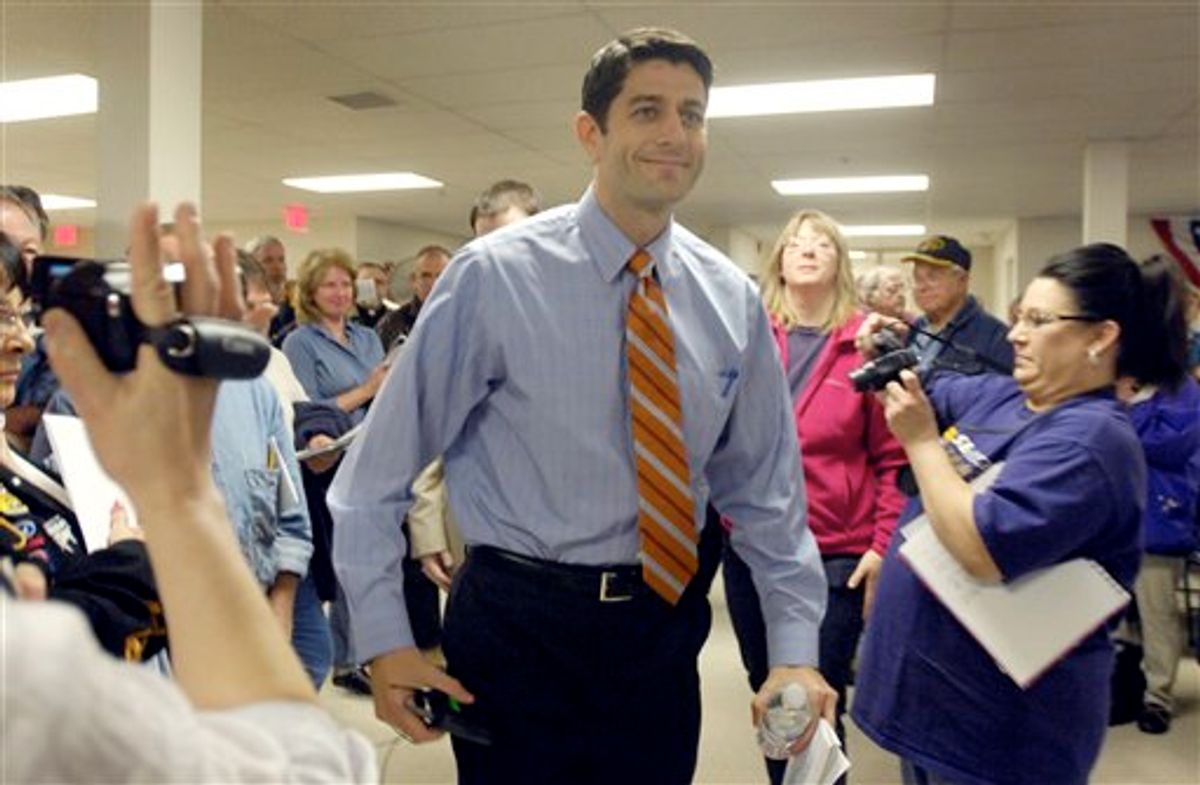 Rep. Paul Ryan, R-Wis., is scrambling to gain ground in the Medicare fray. Tuesday night's special election results in New York state saw Democrat Kathy Hochul defeat GOP candidate Jane Corwin in what is being seen as a referendum on Ryan’s proposal to overhaul the entitlement plan. Today, Ryan is trying to push back in the messaging war over Medicare with a host of talk show appearances and an "explainer" on YouTube.

Time's Kate Pickert aptly called Ryan's task "Sisyphean" -- his Medicare proposal handed Democrats a powerful hot-button campaign issue and alienated members of his own party. Ryan seems to appreciate the political quagmire engulfing him:. First, he donned the uniform of a politician "getting real" for his explainer video: shirtsleeves rolled up, no jacket.

In this YouTube video, "The Path to Prosperity (Episode 2): Saving Medicare," he pronounces "Washington has not been honest with you about Medicare." He then says that the current system is unsustainable and argues that Medicare will collapse without his overhaul in place to "save" it. As Time's Pickert rightly notes, however:

Where he falls short in this video, though, is in his explanation of his own plan. He spends three and a half minutes explaining the health care system and pitfalls of the Affordable Care Act and only one minute explaining his plan, which he’s not specific about. He doesn’t come out and say that the reason it saves money is that the government would spend far less on health care for seniors in the future. Ryan seems to be betting that his lower cost plan won’t sacrifice seniors’ health care because competition and free market principles will automatically make that care cheaper. But that’s simply not true.

Ryan used a similar tack during his appearance on MSNBC's "Morning Joe" early Wednesday. He tried to logically lay out the necessity of his proposal, while criticizing Democrats for "shamelessly distort[ing] and demagogu[ing] Medicare." He is calm and appears to simply be appealing to good sense. It is no doubt this very manner that has led commentators like the Washington Post's right-wing blogger Jennifer Rubin to praise Ryan's "intellectual seriousness" and Joe Scarborough to commend the Wisconsin congressman's "political courage."

But on Wednesday, hours after Hochul's victory, even Scarborough was ready to admit that Ryan's plan amounts to political poison. "If it is about fundamentally changing an entitlement program or a healthcare system, you're going to lose," he said.