How the GOP is budgeting for disaster

What happens when you cut funds for infant healthcare, weather satellites and Wall Street regulation? Nothing good 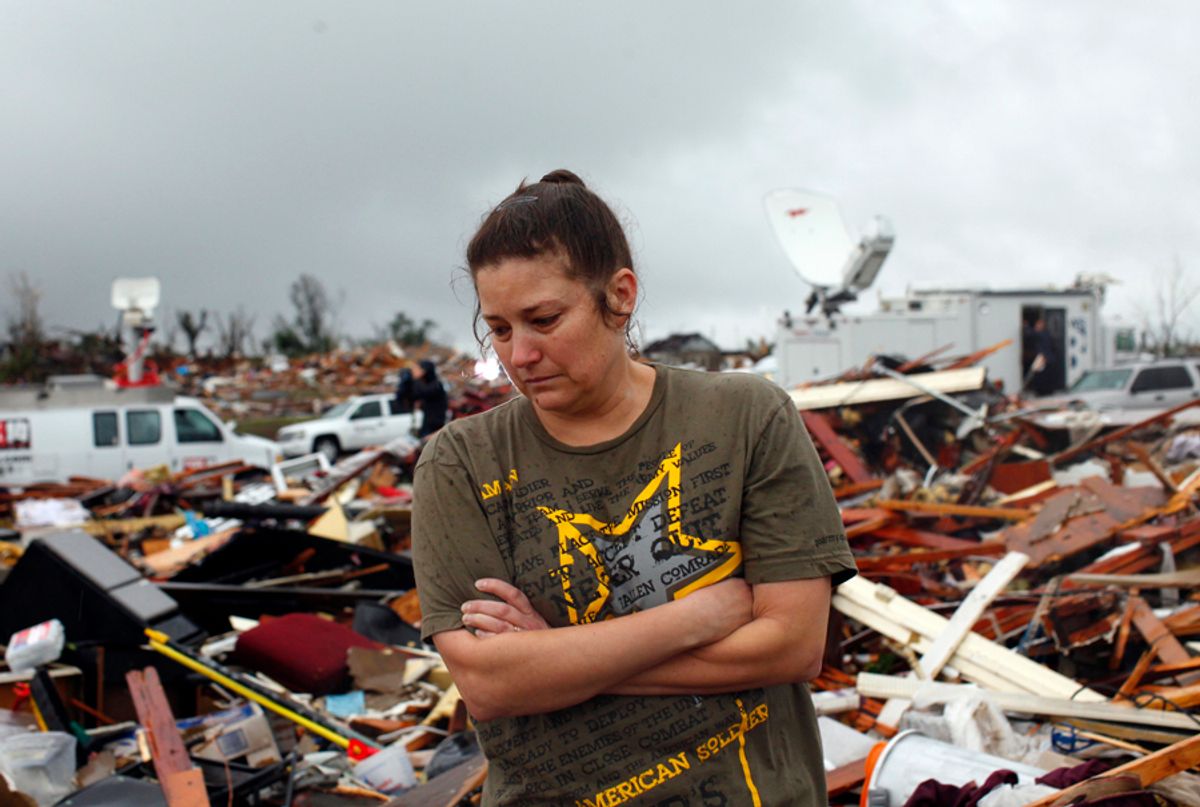 Surveying the wreckage in Joplin, Mo., it seems flat-out nuts to think that cutting financial corners on weather satellites would be a smart move for Congress. But all year long, House Republicans have been doing precisely that, slashing away at the funding requested by the National Ocean and Atmospheric Administration to replace satellites that are rapidly approaching the end of their working lifespan.

The existing satellite program has been a huge success, providing unprecedentedly accurate warnings on severe weather events, as well as data useful for tracking climate change, which may offer us at least one clue why the program is on the GOP chopping block. But success -- or the necessity of preventing future disasters -- rarely seems to enter the GOP budget calculus. Politics rules the cost-cutting math, and if that means institutionalizing a penny-wise, pound-foolish philosophy of fiscal management, so be it.

Consider two other pieces of budget news this week. The House agricultural appropriations subcommittee released proposals to slash $800 million from the Special Supplemental Nutrition Program for Women, Infants, and Children (WIC), and cut 15 percent of the funding for the Commodity Futures Trading Commission (CFTC), the government oversight body that regulates derivatives markets.

According to the Center for Budget and Policy Priorities (CBPP), the WIC program "provides nutritious foods, counseling on healthy eating, and health care referrals to roughly 9 million low-income pregnant and postpartum women, infants, and children under age five who are at nutritional risk." The proposed cuts, says CBPP, would "force WIC to turn away 325,000 to 475,000 eligible low-income women and young children next year."

Never mind the sheer immorality of depriving the most vulnerable members of society access to infant formula. According to the USDA, "every $1 spent on WIC results in a savings of $1.77 to $3.13 in health care costs," primarily by lowering Medicaid outlays. Want to cut WIC funding now? Then be ready to pay more later, to take care of babies born underweight or kids sick because they didn't get their proper immunizations.

The attempt to reduce funding for the CFTC is just as enraging. As Bloomberg acknowledges, "largely unregulated" derivatives transactions "helped fuel the 2008 credit crisis" and caused incalculable economic damage. In his last budget request President Obama sought an annual funding appropriation of $308 million, almost three times the level at the end of Bush's term. The new Republican proposal would cut the current appropriation of $202 million to $172 million.

But even $308 million is a mere pittance for the job of watching over the huge, complex and technologically advanced markets for futures and swaps. As Gary Gensler, current CFTC chairman, observed in testimony before a congressional committee in early May:

To put the CFTC's funding request in perspective, I might note that the CFTC's FY 2010 year-end staff of 682 compares to approximately 800,000 people employed by U.S. brokerage firms, according to the Department of Labor's Bureau of Labor Statistics. That is out of a financial industry that employs 5.6 million people. Furthermore, the CFTC's funding request of $308 million compares to approximately $814 billion in annual revenues of the top 25 bank holding companies according to industry filings with the Federal Reserve. The CFTC's technology budget of approximately $31 million during FY 2010 compares to about $20-25 billion spent by U.S. broker/dealers on technology initiatives per year, according to a presentation recently given to the CFTC's Technology Advisory Committee by the TABB Group....

We recognize that the budget deficit presents significant challenges to Congress and the American public. But we cannot forget that the 2008 financial crisis was very real. Thus Congress responded and said that the swaps market must be regulated and overseen, significantly expanding the scope of the CFTC. It is important that we align the CFTC's funding with its expanded mission.

Priorities, priorities. I'm sure no one is surprised that the same Congress that steadfastly protects tax cuts for the wealthy while voting to maintain subsidies for the oil industry worth about $4 billion, after a quarter in which the world's six largest publicly traded oil companies announced $38 billion in profits, is eager to shaft poor women, gut regulation of the financial sector, and degrade our ability to monitor catastrophic weather events. If your goal is to drown government in the bathtub, there's going to be some collateral damage along the way. But the bad economics of it all are truly crazy-making. Scrimping now so we will inevitably pay more later -- whether for healthcare, or to clean up after tornadoes, or for picking up the pieces after another economic meltdown -- is profoundly irresponsible. Call it disaster economics: a fiscal strategy guaranteed to blow up.