Message to GOP: Blocking every meaningful effort to contain rising medical costs is not helpful 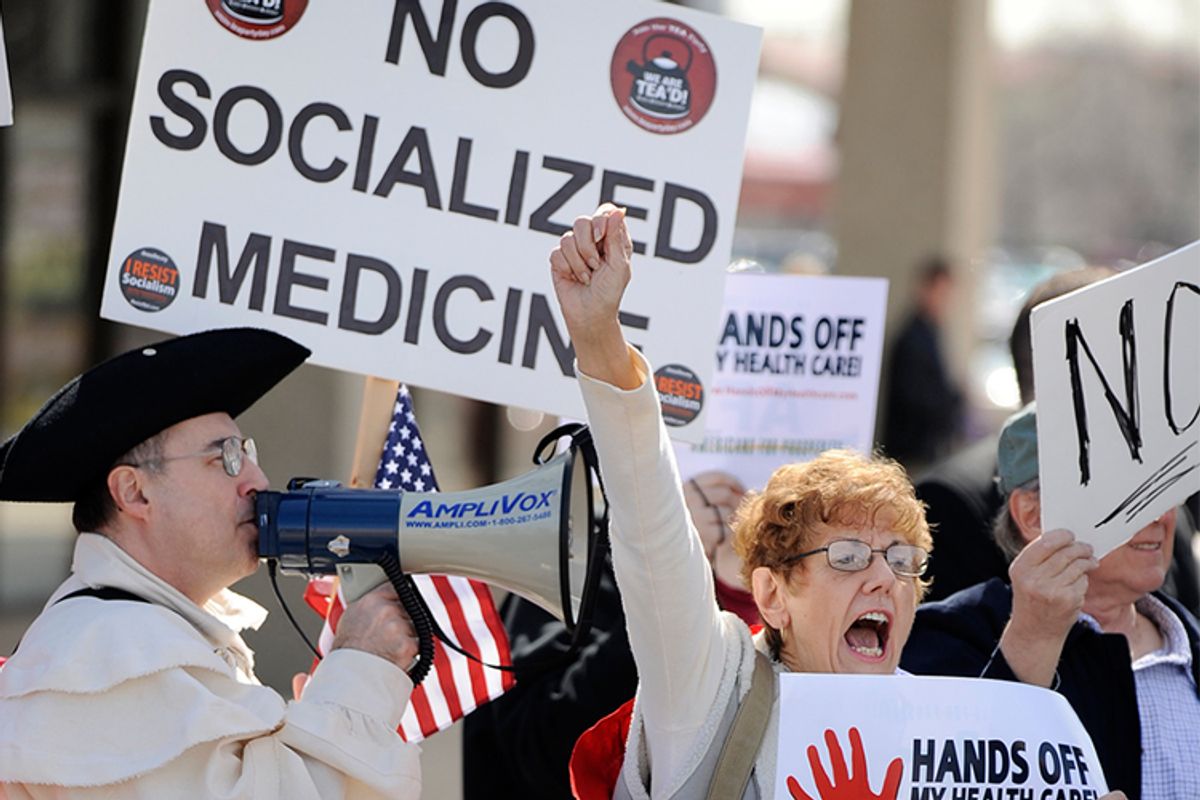 With all the chatter and demagoguery swirling around the question of how to deal with the rising cost of providing Medicare, it's easy to lose sight of the fact that -- despite Republican efforts to the contrary -- a version of healthcare reform that includes significant healthcare cost-containment measures is now the law of the land. And ever so slowly, change is occurring. The jury is still out on whether these changes will add up to a meaningful impact on the problem of rising healthcare costs -- and Republicans are doing everything they can to ensure that they don't -- but there are some early encouraging signs.

The provision of the law that permits young adults under 26, long the largest uninsured demographic in the country, to remain on their parents' health insurance program resulted in at least 600,000 newly insured Americans during the first quarter of 201...

The Health & Human Services Department had estimated that the changes in the law would result in about 1.2 million new enrollees in 2011. However, according to Aaron Smith, the executive director of a Washington based non-profit that advocates for the young, it now looks as if that number will be exceeded.

Why is this good news? Because, as Ungar explains, adding young healthy Americans to the insurance rolls means a: society doesn't pick up the exorbitant tab when they get injured and end up at the emergency room and b: "Because the under 26 crowd tends not to get sick, adding them to the insurance pools helps bring the very balance that was intended by the new law. The more healthy people available to pay for those in the pool who are ill (translation -- the older people), the better the system works and the lower our premium charges should go.

The individual mandate that requires everyone to get insurance would obviously have the same effect, on an even larger scale.

I strongly recommend reading Pearlstein's entire piece to understand the intricacies at play here, but the bottom line is that one driver of rising healthcare costs is hospital inefficiency, waste and basic medical treatment errors:

This insight -- that better quality leads to lower cost -- has become the focus of the effort to slow the growth in health-care spending.

Medicare kicked things off by requiring that all hospitals begin to collect data on various quality measures. The hospitals screamed and complained the metrics were unfair, but they eventually complied. Now the results are published on the Medicare Web site and are widely used by insurers and private groups to rate the quality and cost-effectiveness of individual hospitals.

Sounds like a smart idea, no? Well, guess what: the government and the private sector are on exactly the same page. Another provision in the Affordable Care Act:

Starting in October, Medicare will launch a program it calls "value-based purchasing" in which hospitals can see that their reimbursement rates will rise or fall by one percentage point based on how they do on their quality measures, both in absolute terms and relative to their score the year before. In 2017, the stakes will double, with a two-percentage-point variation allowed in each direction. And because of the way the incentives are structured, there will be a competitive dynamic that drives the benchmarks higher every year -- a "race to the top" in hospital quality.

There are dozens of pilot programs and experiments aimed at reducing healthcare cost inflation in the Affordable Care Act. A sane society would be racing to implement as many as possible, finding out what works and what doesn't, and then doubling down on the best bets. But we do not have a sane society. The latest evidence of this is the Republican strategy for emasculating the single most important healthcare reform cost containment provision: the Independent Payment Advisory Board (IPAB).

IPAB's mandate is to find ways to cut Medicare spending if costs rise too fast. Its powers are limited in many ways -- it's explicitly prevented from "rationing health care" for example -- but in theory, it could move quickly and decisively to rein in spending.

But as Talking Points Memo reporter Brian Beutler reports, Republicans have a sure-fire plan for strait-jacketing IPAB. Every single member of the 15-person board will require Senate confirmation, and Senate Republicans are on record as saying that they simply won't allow anyone to be confirmed!

That means filibusters and 60 vote requirements stand in the way of staffing a panel that Republicans decry as a government rationing board. And months ahead of the nominations, they're telling Obama "good luck with that!"

"I think it would be pretty tough," Sen. Orrin Hatch (R-UT), the top Republican on the powerful Senate Finance Committee, told TPM Monday, when asked about confirming Obama's nominees to IPAB. "We don't believe in rationing, nor do we believe in an unaccountable organization like that. I mean that's crazy."

Maybe Hatch is right. Maybe it is crazy to think that the Obama administration can make any real progress in containing the rise in healthcare costs when the opposition party is so resolute in thwarting every possible step forward. Then again, some might suggest its even crazier to endorse a plan -- the Ryan budget -- that essentially privatizes one of the most popular government programs in existence, while virtually guaranteeing a significant reduction in healthcare coverage for seniors. But while I was writing this post, 40 Senators did exactly that, voting yes for the very same Ryan plan that is already causing all kinds of problems for the Republican party. Do these people have any idea what they are doing?