The smartest, most courageous politicians in the world*

*at least according to Beltway pundits 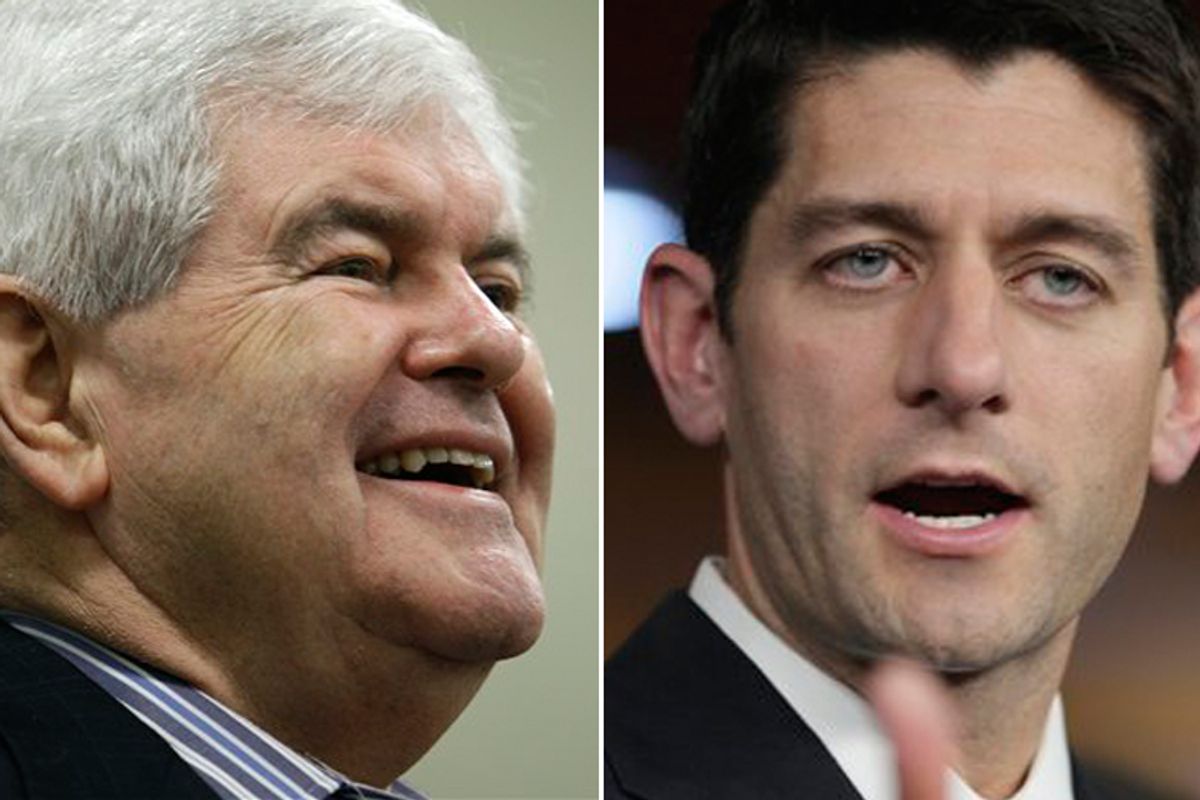 Sometimes certain attributes become linked to certain politicians and there is nothing that can be done about it. Tim Pawlenty will always be boring, for example. He could kill a man in cold blood. Still boring. But that is an assessment based at least partially in reality -- there is nothing remarkable about Pawlenty. Sometimes these descriptors are based purely on repetition. There may be no truth to them at all, though there is often wishful thinking.

Here are some words that we wish people would stop using to describe certain Republicans:

Among members of the traditional political media, the deficit is terribly important, in part because most of them are comfortable employees and in part because they take their cues from the political elite, who always care about the deficit and don't really want to talk about unemployment. Members of the press are often also terrible at math, because if they were good at math they wouldn't have become journalists, so if Paul Ryan says his plan will fix the deficit they will basically just take his word for it, until some other, more influential institutional source tells them otherwise. So a plan that "fixes the deficit" -- especially one that does so by taking the ax to popular programs like Medicare instead of by doing something popular like "taxing rich people" -- is "brave" and "courageous." To David Brooks, of course. To Jonah Goldberg, who took a liberal joke about wanting Ryan to run for president and made it into a serious call for Ryan to run for president. Even to some liberals!

Of course, as Jamelle Bouie and others have pointed out, it is not particularly "bold" when a right-winger proposes right-wing policies. It's slightly "brave" to propose something terribly unpopular, but instead of arguing that Medicare needs to be destroyed, Republicans are just whinging about how Democrats are pointing out that Republicans plan to destroy Medicare.

Newt Gingrich is an idea man! Matt Bai was impressed with his intellect. Gingrich is always the "smartest man in the room." (Sometimes that room is the showroom at Tiffany's!) He is not just an "idea man," he is "an ideas machine," according to Mark McKinnon!

He writes lots and lots of books, it's true. He can speak extemporaneously on a number of subjects. I guess the bar for "congressional smarts" is low enough that Newt Gingrich seems very smart indeed! But all of his "big ideas" have always been, in reality, stunts. A brilliant man should probably be able come up with a better justification for adultery than loving his country too much. Indeed, a lot of Newt's career seems to involve unforced errors and hilarious bumbling!

For some reason, a corpulent lobbyist with a history of racially tone-deaf remarks was, for a surprisingly long amount of time, treated as a very serious possible presidential candidate by the press. He would've won the South, I guess? But literally no other place in America. No one told the pundits or their sources! Or the people trying to "draft" him into the race.

But, you know, he is just so nice:

"It's not Haley's politics, although his pragmatism so outweighs his partisanship, he looks like Gandhi in our current political atmosphere," says Bloomberg News columnist and Daily Beast contributor Margaret Carlson, a doyenne of the Washington media-political complex.

"I surely would not underestimate him," a member of the Republican establishment told Lloyd Grove. "He has succeeded in everything he’s done." (I guess he's never attempted to do anything about Mississippi's infant mortality rate, then.)

Mitch Daniels is so, so serious. Mr. Grown-up adult. Respected by all. The "grown-ups" on the right worship him. Liberal wonks have a grudging -- or even non-grudging -- respect for him.

Substantive. He's the Republican you're supposed to support for the good of our serious, adult American political culture.

Bullshit, I say. This is the architect of the Bush tax cuts, predicated and sold to us based on lies, as part of the long-term plan to redistribute American wealth upward. There's nothing "responsible" about that. It is the opposite, in fact!

As for his non-scariness, the fact that he doesn't wed his standard far-right class warfare to white nationalist rhetoric is simply a reason why he wouldn't have won the nomination.

Let's just all agree to think about what words mean before we apply them to politicians, shall we?