Two days of meetings in France are getting under way today 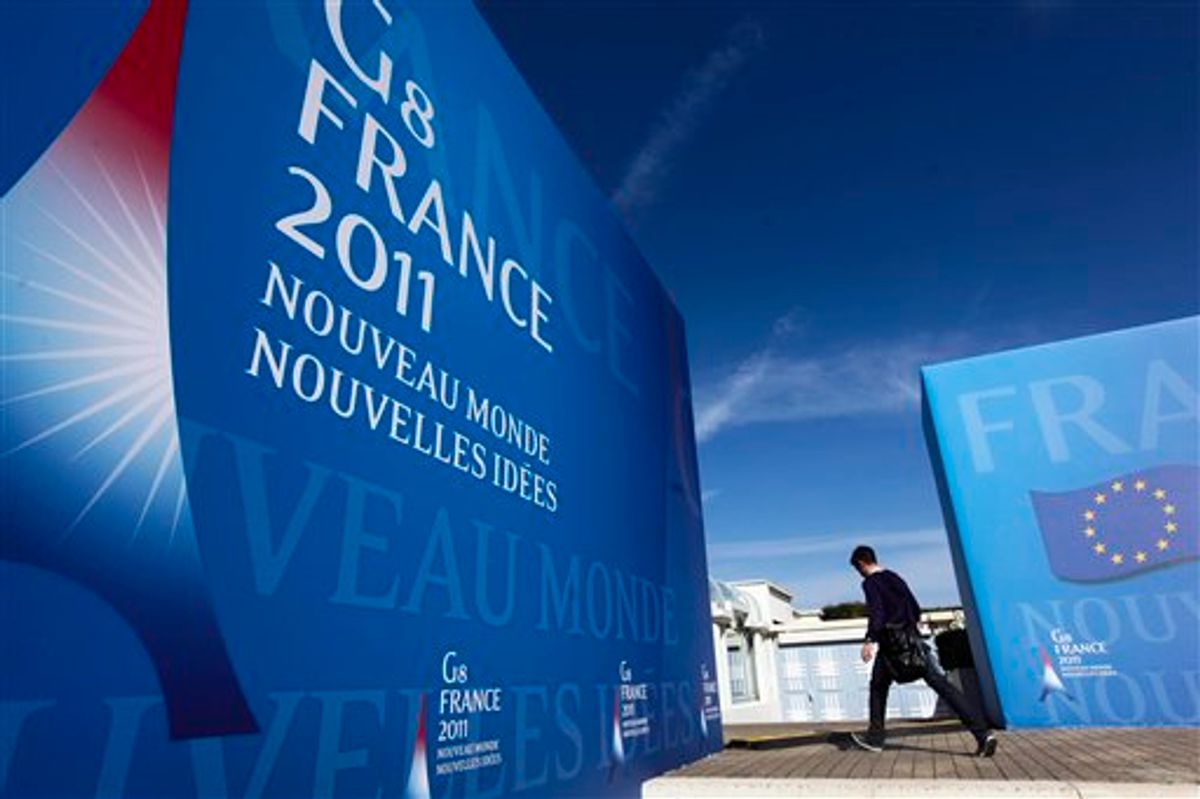 A man walks in front of the Deauville Congress Center, in Deauville, western France on Monday, May 23, 2011 where world leaders of the G8 will meet for a summit May 26 and May 27. World leaders of the Group of Eight industrialized nations will put aside the squabbling over deficits and austerity that has marked their recent gatherings and seek to marshall their combined economic might behind the grass-roots democracy movements that have swept North Africa and the Middle East since their last meeting a year ago. (AP Photo/Markus Schreiber) (AP)
--

President Barack Obama prepared to press allies from the Group of Eight industrial nations for commitments in the Middle East and North Africa during two days of meetings in France that were getting under way Thursday.

Air Force One touched down in the seaside resort of Deauville after a flight from London Thursday morning for the summit's opening meetings. The world's leading economic powers are seeking ways to support fledgling democratic transitions in Tunisia and Egypt, while also creating incentives to encourage other countries in the region to pursue greater political freedoms.

The summit comes on the heels of Obama's sweeping address at London's Westminster Hall Wednesday, where he cast the U.S., Britain and other like-minded allies in Europe as the world's "greatest catalysts for global action." He will echo a similar theme in his discussions with G-8 partners on the recent Arab uprisings and argue that the political protesters in the Middle East and North Africa share their democratic values.

While both Obama and Medvedev have made improving relations between their former rival nations a priority, tensions remain.

Medvedev has become increasingly critical of U.S. plans to erect a missile shield in Central and Eastern Europe, a move Russia sees as possible encroachment. The Russian president has warned Washington that failing to cooperate with Moscow on the shield could lead to a new arms race.

Obama's meeting with Kan will be the first between the two leaders since the March earthquake and tsunami in northeast Japan that sparked fears of a nuclear meltdown at the damaged Fukushima plant.

Interim prime ministers from Tunisia and Egypt, where longtime leaders were pushed out of power earlier this year, will join the summit Friday for a special session aimed at identifying their nations' most critical needs as they move toward elections. Representatives from the World Bank and the International Monetary Fund will give G-8 leaders an assessment of what it will take to modernize and stabilize the Tunisian and Egyptian economies.

Obama has called on the G-8 to do more than just offer aid and assistance; he wants leading industrial nations to focus on boosting long-term investment in the region and increasing trade. U.S. officials have said other Arab countries that embark on democratic transitions could also receive financial help.

In a letter to G-8 leaders Tuesday, Secretary of State Hillary Rodham Clinton and Treasury Secretary Timothy Geithner urged the summit partners to help Egypt swap its debt for investments in job creation.

While the U.S. is holding up Tunisia and Egypt as the most successful models to emerge from the Arab unrest thus far, both face significant obstacles on their paths toward democracy. Tunisia has imposed periodic curfews and detained about 1,400 people in continued protests, and in Egypt, sectarian violence has broken out, with Muslims and Coptic Christians clashing in the streets.

Obama will also face questions at the summit about the NATO-led bombing campaign in Libya. Obama said Wednesday that the operation has no clear end date, though he contended it ultimately would be successful in stopping Moammar Gadhafi's attacks on civilians.

Also likely to be discussed are the U.S. troop drawdown plan in Afghanistan, Obama's renewed push for Middle East peace and the continued steps the world's leading economies are taking to recover from the global downturn.

After the summit wraps up Friday afternoon, Obama was to travel to Poland, the last stop on a four-country, six-day tour of Europe that began Monday in Ireland.