Europe's top war crimes fugitive has been on the run since 1995, when he was indicted by the U.N. for genocide 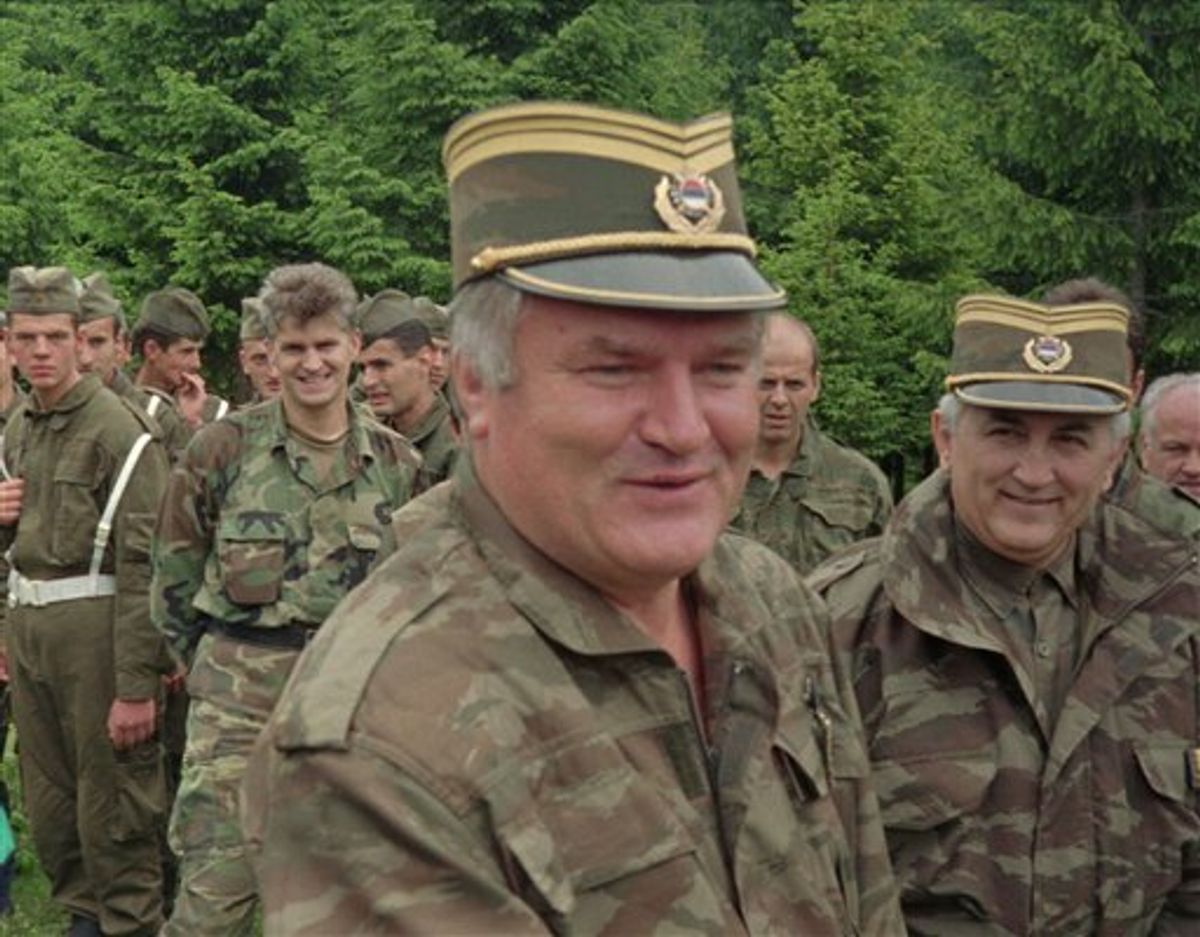 FILE In this June 28, 1996 file photo Bosnian Serb military commander General Ratko Mladic, center, smiles as he visits troops to mark both the fourth anniversary of the founding of his Bosnian Serb army and St. Vitus' Day, the anniversary of the Serb defeat by the Turks at Kosovo in 1389, near the village of Han Pijesak, some 40 miles east of Sarajevo. Belgrade media reports Thursday May 26, 2011 that a man suspected to be Europe's most wanted war crimes fugitive Ratko Mladic has been arrested in Serbia. Serbia state TV said a man who identified himself as Milorad Komadic when he was arrested Thursday is the wartime Bosnian Serb army commander. It gave no other details. (AP Photo) (AP)
--

Mladic has been on the run since 1995 when he was indicted by the U.N. war crimes tribunal in The Hague, Netherlands, for genocide in the slaughter of some 8,000 Bosnian Muslims in Srebrenica and other crimes committed by his troops during Bosnia's 1992-95 war.

"On behalf of the Republic of Serbia we announce that Ratko Mladic has been arrested," Boris Tadic told reporters. He said the arest was made by the Serbian Security Intelligence Agency.

Mladic will be extradited to the U.N. war crimes tribunal, he said. He did not specify when, but said "an extradition process is under way."

"We ended a difficult period of our history and removed the stain from the face of the members of our nation wherever they live," he said.

Serbia has been under intense pressure to make the arrest, with the chief U.N. war crimes prosecutor, Serge Brammertz, complaining earlier this month that authorities were not doing enough to capture him and other war crimes fugitives.

Brammertz was scheduled to report next month to the U.N. Security Council about the Balkan country's efforts.

Brammertz's regular reports on Serbia's compliance are crucial for the Balkan country's efforts to become an European Union member candidate. The EU has conditioned Serbia's membership bid on the arrest.

Prosecutors have said they believed he was hiding in Serbia under the protection of hardliners who consider him a hero. Mladic was last seen in Belgrade in 2006.

Croatian media, which first broke the story, said police there got confirmation from their Serbian colleagues that DNA analysis confirmed Mladic's identity. Belgrade's B92 radio said Mladic was arrested Thursday in a village close to the northern Serbian town of Zrenjanin.

In Brussels, NATO Secretary-General Anders Fogh Rasmussen hailed the arrest, saying Thursday that almost 16 years since Mladic's indictment for genocide "his arrest finally offers a chance for justice to be done."

Tens of thousands of NATO troops were deployed to Bosnia in 1995 to safeguard a U.S.-sponsored peace agreement between that nations' warring factions. They have since been withdrawn abd replaced by a much smaller European Union force.