Ratko Mladic was Europe's most-sought fugitive. In the coming years, our eyes will likely turn to Africa 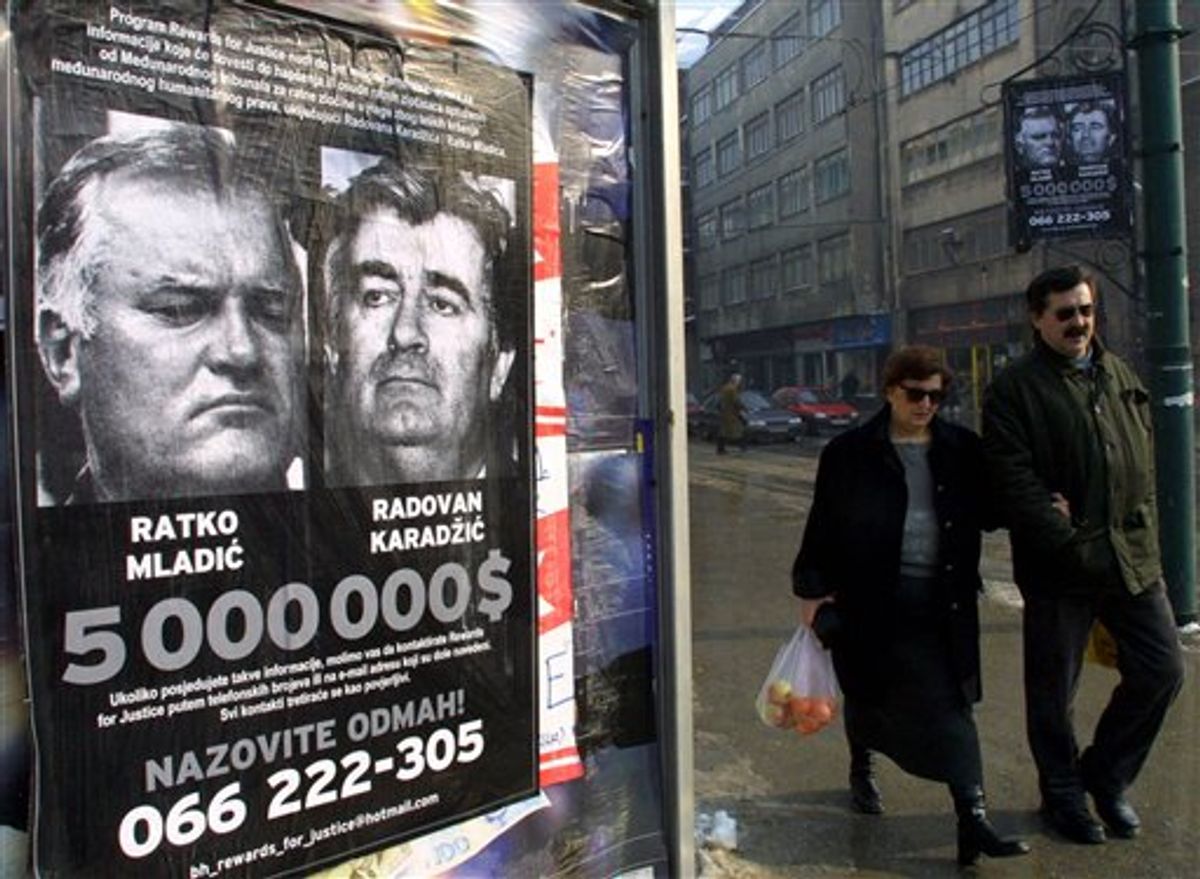 FILE In this Jan. 20, 2002 photo, a Bosnian couple passes by a poster of Bosnia's two most wanted war crimes suspects, the leader of Bosnian Serbs Radovan Karadzic and his war time commander Gen. Ratko Mladic, in Sarajevo. Mladic, Europe's most wanted war crimes fugitive, has been arrested in Serbia, the country's president said Thursday, May 26, 2011. Mladic has been on the run since 1995 when he was indicted by the U.N. war crimes tribunal in The Hague, Netherlands, for genocide in the slaughter of some 8,000 Bosnian Muslims in Srebrenica and other crimes committed by his troops during Bosnia's 1992-95 war. (AP Photo/Sava Radovanovic) (AP)
--

This morning saw news of two major breakthroughs in the search for war crimes fugitives worldwide. The item that immediately captivated the international press was the arrest of former Bosnian Serb Gen. Ratko Mladic; the second, less-trumpeted victory was the capture of Bernard Munyagishari, accused of helping to plan the 1994 genocide of 800,000 Tutsis in Rwanda.

Ten fugitives from the combined lists -- men the State Department hopes to see featured in headlines similar to today's -- remain at large. The fact that nine of them are related to a conflict in Africa (the Rwandan genocide), and only one to a European conflict, signifies that our attention is likely to turn ever more to the former continent in the continuing search for high-profile fugitives. (The Simon Wiesenthal Center keeps a list of the most wanted Nazi war criminals but, as the center itself points out, there is a significant chance that those who have not yet been located are already deceased.)

The final figure sought by the ICTY is Goran Hadzic (53), who has been missing since 2004. According to a PBS "Frontline" profile:

Hadzic faces 14 counts of war crimes and crimes against humanity for his alleged involvement in the forcible removal and murder of thousands of Croatian civilians from the Republic of Croatia between 1991 and 1993. His indictment specifically names the 1991 massacre of 250 Croatian and non-Serb civilians from the Vukovar hospital in one of the first atrocities of the war.

The other nine war crimes fugitives listed by the Rewards for Justice program -- these sought by the ICTR -- are: