Why is someone else in my book's author photo?

I was thrilled when a new version of my novel arrived. But then I saw the back flap -- and the confusion began 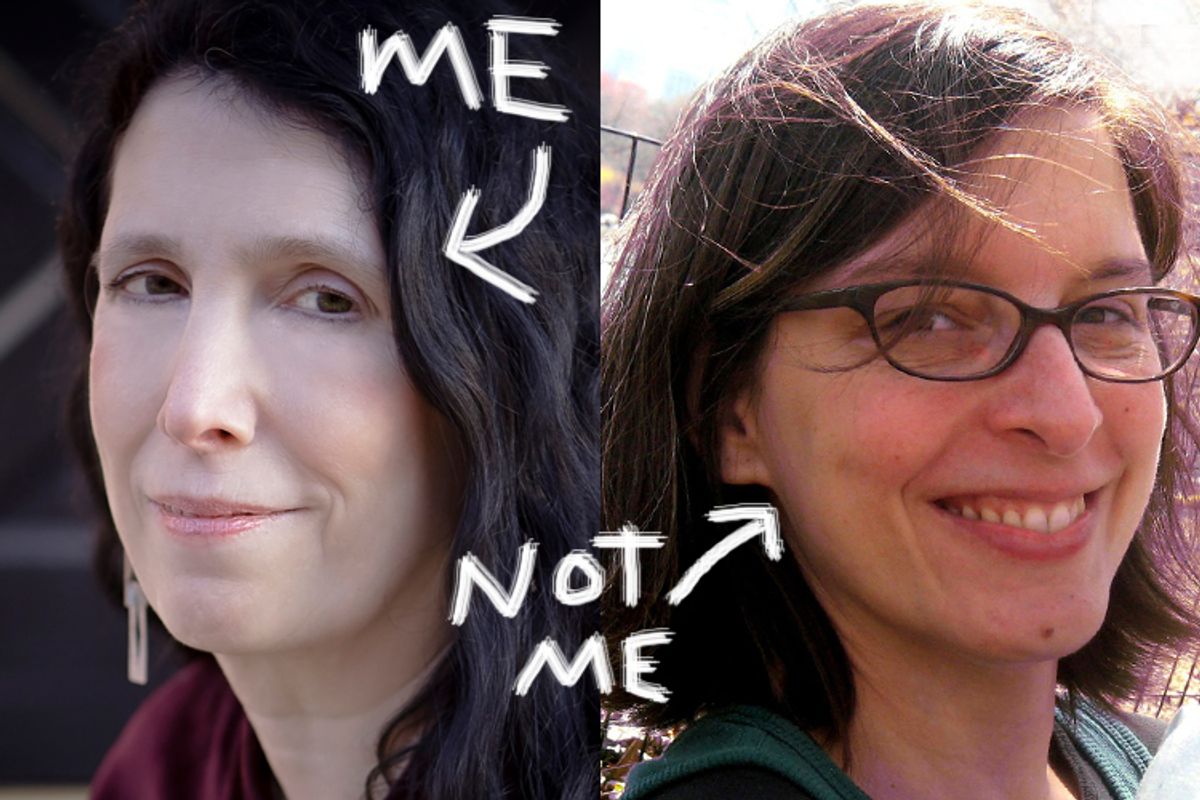 Imagine this. My eighth novel, "Girls in Trouble," has just been issued in Chinese, and a carton of the books arrives. My husband, Jeff, and I tear open the package and gleefully pull out six shrink-wrapped copies. The cover's pretty simple -- a silhouette of a girl on a bike -- but the deep red color is luscious, and I can't stop running my fingers over the silky paper and examining the Chinese characters inside and wishing I could read them.

"Which photo did you give them?" Jeff asks, and he opens the flyleaf and stares down at the book in dismay. He points to the page. "Who is this?"

There, on my book, over my name in English, is a big color photograph of a complete and absolute stranger. The woman in the photograph is beautiful. She has straight, shortish hair where mine is curly and long, She wears glasses where I do not. She's beaming where I always try to look mysterious in my photos. The only thing we have in common is we're both women and both white. "What the fuck?" I wail.

A book is like a baby. You give birth to it, you tend it, you fall hopelessly in love with it. But just like a baby, you don't raise it to keep it. You have to let go somehow, and you do it trusting and hoping that others will love it and care for it the way you do. I've written enough books to know that once a novel is out, it's out of my hands. I can't control who'll review it (or even if they will review it), whether stores will feature its cover front and center or stick it in the back in the wrong section, and I certainly have no say in whether people will treasure it or sell it on eBay for a dollar. But this -- the photo, one of the few things that I can control -- has been wrested right out of my hands.

I haven't had many odd things happen to me during the publication process before, though I did come across a book site that insists the main character in my latest novel, "Pictures of You," is Lionel Richie. (It isn't.) I contact my old publisher who has no idea how this happened, and they assure me they are going to look into it. But I'm as curious as I am horrified. Who is this strange woman who is supposed to be me? The photo looks vaguely familiar, but I have no idea why.

Because the whole thing is so discomfiting to me, and maybe because I want some sympathy, I post the picture on Facebook and Twitter, telling the story, and then asking, "OK, guys, who is this?"

I just want consoling verbal hugs, but I strike a nerve and I'm astonished at the response. Ninety or so people comment, a mix of authors and readers. The authors want to make sure they figure out how this happened so it will never happen to them. "Are you sure this isn't a pirate edition?" someone asks. The others think it's hilariously funny.

One person quips, "I know this woman! She does this all the time to authors!"

I laugh and joke along with them, but I really want to cry.

Astonishingly, another writer, Holly Kennedy, tells me the same thing happened to her with the galleys of her book, "The Penny Tree." She was stunned and her editor was mortified when a stranger's picture showed up, but at least they were galleys (rather than hardcover final editions), and she could get it fixed. "There's still a tiny piece of me bracing for the worst when the actual book comes out," she says. "But if it's the wrong photo, maybe I'll use it as an angle to get myself invited onto the Regis and Kelly show."

That night, before I go to sleep, I check Facebook one more time, and a new post jars me awake: "I found it! The woman is Summer Pierre! She wrote 'The Artist in the Office.'"

Summer Pierre. Now I remember! A year ago, I interviewed her on my blog for her book "Great Gals." I quickly go back to my blog and backtrack to find the post and there it is, Nov. 18, 2010. I click on it and the photograph swims up on my monitor -- clearer, more focused -- but that's the picture on the back of my book. It's her.

So now I know who the mystery woman is, but she surely has no idea she's in my book. How is this going to make her feel, with her image in the wrong book and it's not even credited to her? I find Summer's contact info on her website and send her an email. "I don't know how this happened," I start to write, and I tell her the story. A day later, I get a response.

"Holy Internet Snafu," says Summer. She tells me that usually everyone thinks she's Tina Fey, rather than me. "The hilarious thing is I hate that photo and used it once out of total necessity," she says. "It's just a snapshot that my husband took, and hey can he get a photo credit? Just kidding." She tells me the Chinese edition with her photo fills her with pride. And then she apologizes profusely, which isn't necessary at all. And then because this is a mishap that happened to both of us, I offer to send her a copy of the novel because, after all, her photo is in there. I want to sign it, "I hope my photo isn't in your next book!" but instead I just sign my name.

So the mystery is solved. I know it could have been worse. What if the edition had been in America, where I know people and they know me? No one in China will ever know it's a mistake. And I tell myself an author photo is just window dressing. What matters is my novel, my writing -- that's what's important, isn't it?

But still, I mourn. Chinese readers may get lost in the fictional story, but an author's photo is the reader-writer connection. (Don't readers like to know about the author?) It's a public acknowledgment that a real person -- me! -- spent four years agonizing and obsessing over the story. It's an image that says this is who I am, this is the physical image of the person who put this story into the world.

Just this morning, my old publisher emails me. They want to send the Chinese publisher the right photo. Is the photo they attached OK? I open the attachment. It's a 10-year-old picture of me. I send them the right one. A picture may be worth a thousand words, but when they're my words and my picture, I'd rather have both of them right.