Sarah Palin may actually run. So what? 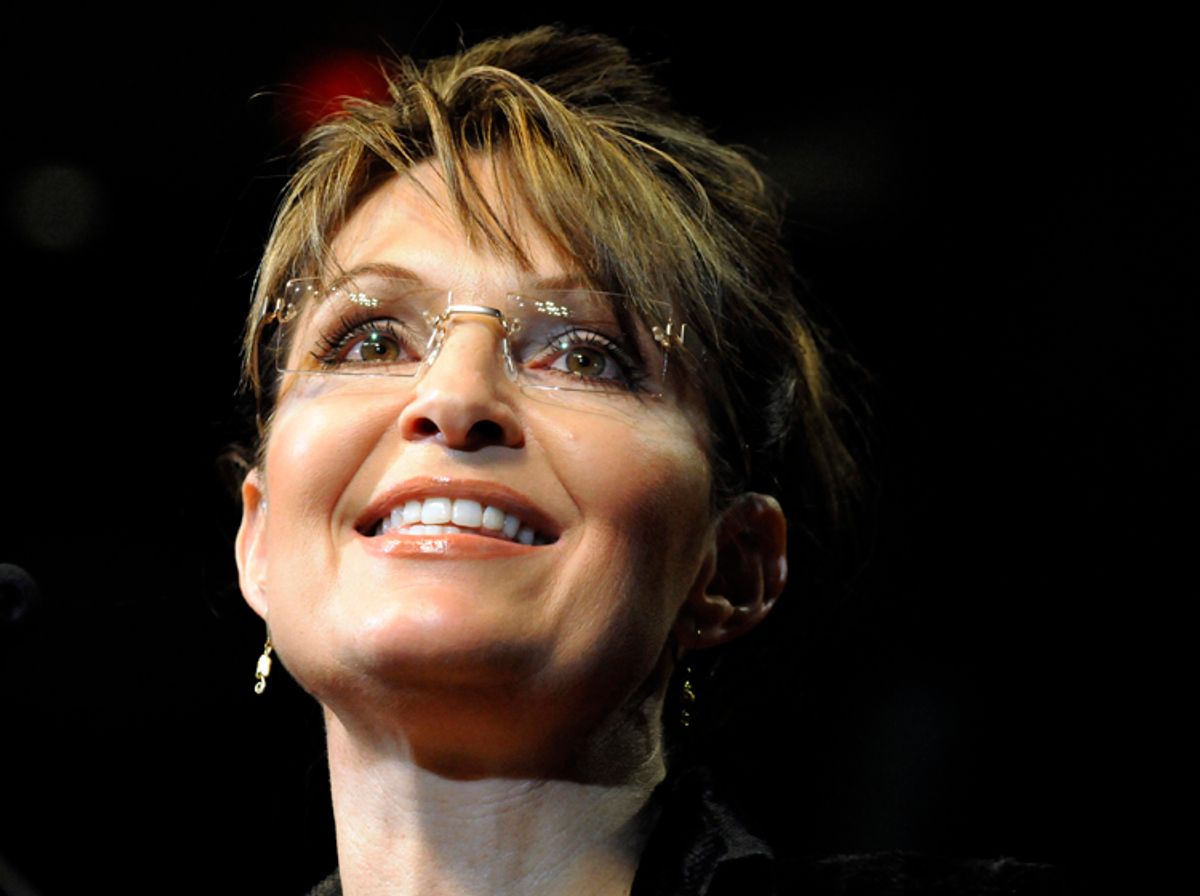 At any point in 2009 or 2010, news that Sarah Palin was taking "concrete steps" toward launching a presidential campaign would have sent the political world into an absolute frenzy, with Democrats rejoicing, Republican leaders panicking, and cable news channels shifting into "all Sarah, all the time" overdrive.

But things are a little different now, and while a report in Thursday's New York Times that Palin is sending fresh and unmistakable signals that she may join the GOP's 2012 field is certainly generating conversation, this hardly feels like the earth-shattering, campaign-altering development we once assumed it would be.

The short answer, as I outlined a while back, is that the Republican Party establishment reacted intelligently to the midterm election results last November. Yes, on the whole the results were fantastic for the GOP -- a victory as sweeping as any party had seen in decades. But most of the GOP's midterm success wasn't earned; it was the inevitable product of mass economic anxiety, total Democratic control of Washington, and all of the low-hanging fruit created by the Democrats' landslide victories in 2006 and 2008 (which placed dozens of Democratic incumbents in districts that are naturally Republican).

The GOP establishment, to its credit, seemed to recognize this and focused instead on the '10 races that on paper should have been Republican victories, but weren't: Senate races in Delaware, Nevada and Colorado, for instance. And the reason for these defeats was obvious: The races were high-profile enough that candidate quality mattered, and Republican nominees (Christine O'Donnell, Sharron Angle, Ken Buck) all had serious, fundamental flaws. For the establishment, the implication for 2012 was obvious: The same party base that picked these candidates is liable to choose Palin and cost us a winnable election -- unless we step in.

It was against this backdrop that an unofficial "stop Palin" campaign was launched by opinion-shaping GOP "elites" in the months after the midterm. Conservatives with credibility with the GOP rank-and-file -- including Charles Krauthammer, Andrew Breitbart and even Bill Kristol (the man widely given credit for "discovering Palin while on an Alaska cruise in 2007) -- began delivering the message in subtle and not-so-subtle ways: Let's find someone else to be our standard-bearer against Barack Obama. By the end of December, there was reason to believe this was having an impact, as Palin's numbers -- which had long been poisonous outside of the Republican Party -- showed serious slippage among GOP voters.

Then came Tucson. When Palin issued her tone-deaf "blood libel" response to criticism of the "crosshairs" image of Gabrielle Giffords she'd once used on her website, Palin gave GOP elites a perfect opening to do permanent, lasting damage to her standing, and they happily piled on. As I wrote at the time, Palin actually had something of a legitimate gripe (there was no direct or indirect link between her website and Giffords' shooting), but that was beside the point; GOP elites used the occasion the same way the Democratic establishment used John Kerry's "botched joke" a few years earlier -- as a tool to marginalize an unwanted national candidate. The incident also apparently cost Palin dearly with elites who hadn't yet turned on her; according to a new profile, Roger Ailes, the Fox News chief who is now one of the most important men in GOP politics, counseled Palin to stay quiet after the Giffords shooting -- and was baffled and infuriated when she spoke out.

As a result of all of this, Palin will enter the GOP race -- if she does decide to run -- as a marginalized figure. She has plenty of fans among the party's grass roots, universal name recognition, and probably the ability to raise some serious money in small donations. But the most influential voices on the right are almost universally opposed to her now, and are committed to communicating this to the rank-and-file. They are convinced she'd be a disatrous general election candidate, and she's also done a fine job (with moves like this) showing them that she's not a team player.

A Palin campaign would probably play out similarly to the second phase of Gary Hart's 1988 presidential campaign, when he jumped back in the race (seven months after dropping out amidst a sex scandal) two months before the New Hampshire primary, and quickly found himself atop the polls. But all was not well. Hart, who had been the front-runner when he'd dropped out, still had many grass-roots admirers, but his negative numbers were also unusually high, among all voters and even among Democrats. And the party establishment treated him like poison; they didn't want him anywhere near their general election ticket. He couldn't build a serious campaign organization, rank-and-file voters got the message, and Hart -- even though he'd been a national political sensation between 1984 and 1987 -- was a nonfactor in the '88 primaries.

Granted, Palin might not do quite as badly as Hart did. She could potentially fare well in Iowa. But she's so alienated her party's elites that she now faces a clear ceiling. No doubt, the GOP establishment would prefer it if she simply decided not to run. But the prospect of her candidacy no longer terrifies them. They've got this one under control.