The Army gives you superpowers! 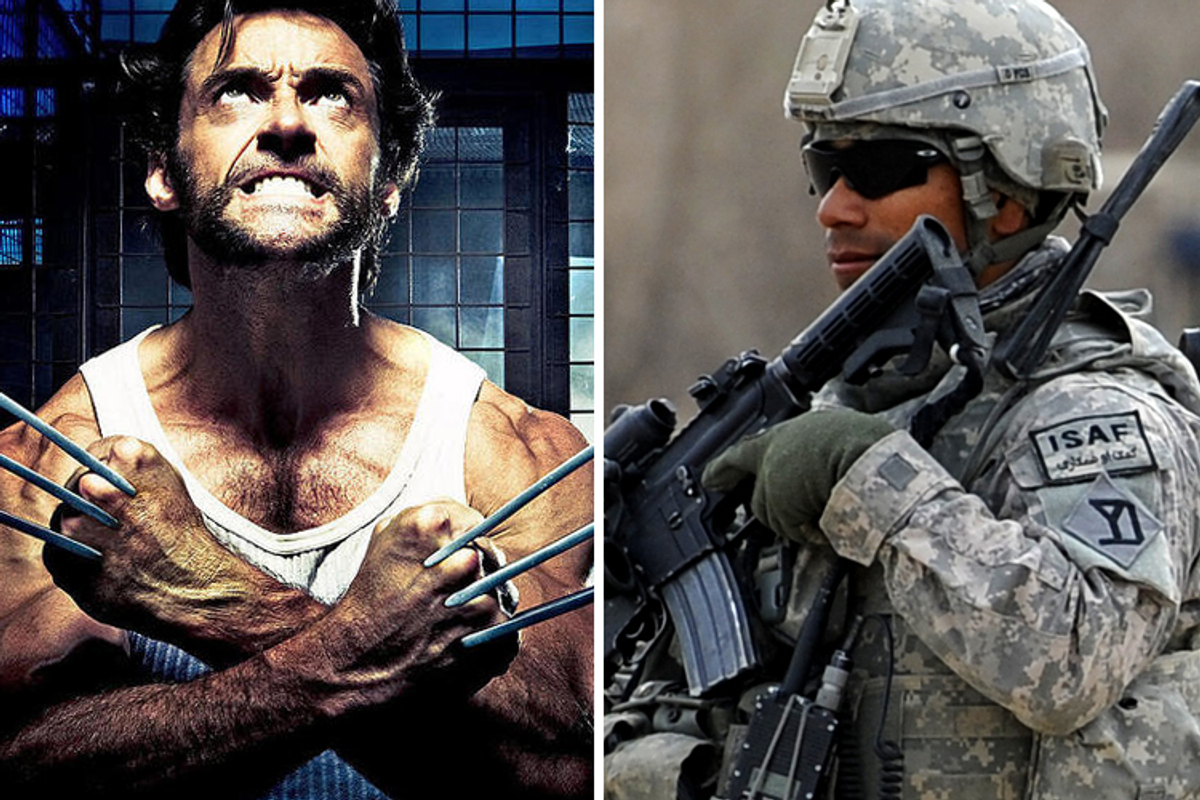 In a breathless story somehow presented as a groundbreaking revelation, the New York Times this week tells us that the Pentagon is -- shocker! -- using all sorts of media channels to glorify militarism and sell it to the nation's children. The armed forces, of course, have been carefully constructing this child-focused Military-Entertainment Complex for the better part of three decades. And that complex includes directly subsidizing Hollywood's pro-militarist films, despite the Times' insistence that the military's financial support of "X-Men: First Class" represents the Army's "first sponsorship deal with a Hollywood film."

That said, the Times piece does include one important (if buried, decontextualized and unrecognized) piece of genuine news. It concerns a subtle-yet-insidious shift in the Pentagon's child-focused propaganda -- one that opens the military up to charges of rank hypocrisy.

You may recall that in recent years, the Military-Entertainment Complex has been selling kids on the idea that military service is a gloriously fun adventure. In one famous ad, the Marines pretend being a soldier is the equivalent of being a "Lord of the Rings" hero crossing bridges over mystically infinite gorges -- and slaying fiery monsters along the way. In another series of ads aired as previews in movie theaters, the Air Force portrays dangerous front-line missions as glorified video games, telling kids: "It's not science fiction -- it's what we do every day."

Deceptive as these spots were, they at least held out the (unstated) possibility that military service can be dangerous and they didn't pretend joining the Army gives an enlistee death-defying superpowers. The same, though, can't be said for the new ad campaign covered by the Times -- a campaign that both visually and literally suggests that joining the military is like joining the X-Men.

Yes, the Army's new ad juxtaposes images of fictional superheroes with images of soldiers and then tells viewers to "try it on" -- as if wearing the uniform will give "ordinary people" super powers to single-handedly fight off Magneto. Mimicking even the three-word tag line, the Army's spot is an eerie parrot of Nike's famed "Revolution" spot -- the one that juxtaposed images of amateur athletes with professional athletes in order to suggest we can all be sports superstars if we "just do it."

Obviously, the ads seek to obscure the simple truism that being a soldier is very dangerous, as evidenced by the tens of thousands of American troops killed or wounded in our state of permanent war (or, in the Pentagon's Orwellian terms, this era of "persistent conflict"). And while the Pentagon cannot be expected to proactively advertise the hazards of military service, the new commercials are particularly insidious coming from a Pentagon that proactively hides those hazards from public view.

Remember, it was only two years ago that Defense Secretary Robert Gates took extraordinary measures to try to prevent news organizations from publishing a journalist's single photograph documenting the battlefield killing of an American soldier in Afghanistan. Likewise, the Bush administration banned journalists from photographing flag-draped coffins coming back from Iraq -- even though the coffins were unmarked, thus protecting the identity of the dead soldiers. And, as a BBC report showed, the entire process of "embedded reporting" through which the Pentagon steers war journalism has resulted in "coverage [that] has become sanitized" -- that is, devoid of the violence and bloodshed that actually happens on the battlefield.

Taken together, we can see the obvious contradiction. One part of the Pentagon is employing every media instrument available -- Twitter, Facebook, TV commercials, movies, etc. -- to tell America that becoming a soldier gets enlistees immortal superpowers that will keep them safe on the battlefield. At the same time, another part of the Pentagon is employing its considerable influence over that same media world to try to prevent the blood-soaked truth of the battlefield from ever being seen.

That may help the Pentagon boost its short-term recruitment numbers, but it screws over enlistees who are promised one experience, and given another.